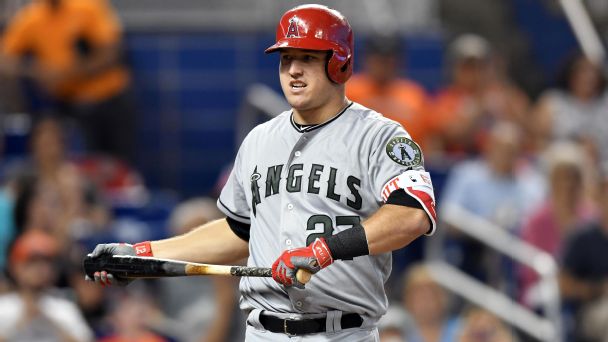 Mike Trout's absence for the next six to eight weeks due to a torn ulnar collateral ligament in his left thumb is a seemingly crushing blow to his fantasy owners' squads, but just how much should his owners panic?

Approaching Trout's absence from a pure rankings perspective, he was previously my No. 1-ranked player overall for the remainder of 2017, but more than that, he was No. 1 by a significant margin -- he'd have been projected to earn at least 15 percent more in terms of Rotisserie dollars the rest of the way than any other individual player.

With an estimated absence of nearly two months, however, Trout plummeted to 96th overall and 30th among outfielders, projecting his trade value to be roughly equivalent to Matt Kemp, Freddie Freeman and Lance McCullers Jr., who are other players ranked in his tier.

Here's a look at how I came up with that new ranking.

Diving into the data

In the past five seasons alone (2013-17), Josh Hamilton (2014), Bryce Harper (2014), Brandon Phillips (2014), Hanley Ramirez (2013), Andrelton Simmons (2016) and Trevor Story (2016) each suffered a torn UCL in the left thumb that necessitated surgery, while Jed Lowrie (2015) and Yadier Molina (2014) suffered torn UCLs in their right thumbs that required surgery. That group averaged 55 days' and 47 team games' absences, or just shy of seven weeks; that makes Trout's six- to eight-week timetable seem reasonable. Simmons returned in the shortest amount of time (37 days), while Lowrie (93 days) required the most.

That's not to say that each of these players' injuries was precisely the same, or that Trout will recover at the same speed and effectiveness that they did. Harper, perhaps the most comparable talent of the bunch, struggled to the tune of .214/.319/.306 rates in his first 25 games after returning, but surged to .298/.356/.491 rates in his final 48 games of 2014. Ramirez struggled through other injuries in 2013, but hit a robust .345/.402/.638 during that year. There's a non-zero chance that Trout might struggle to regain his feel for hitting immediately upon activation, something that might manifest more in terms of a slight increase in his swinging-strike and strikeout rate or a slight decrease in his power; but at the same time, Trout even at 90 percent health is still more valuable in fantasy terms than most every other player in the game.

Beginning with the Los Angeles Angels' game on Tuesday, the team is scheduled for 39 more games before the All-Star break, which coincides with the six-week spot on Trout's timetable. Seven weeks would be 42 team games, eight full weeks would be 47 team games. Assuming a full eight-week absence, as I did in the rankings, Trout would have 61 remaining Angels games in which to play.

Here's what I've projected for those games, including a comparison to a player ranked only a few outfield spots beneath him:

Corey Dickerson is my No. 115 overall player and No. 34 outfielder. What differentiates these two players in a mixed-league context, however, is that fantasy owners have the ability of plugging in a relatively useful outfielder in Trout's stead during that 47-game absence. In a deeper league, Trout might warrant being moved down 15-30 overall spots, whereas in a standard ESPN 10-team league, Trout might still make a compelling case to be a top-25 outfielder and top-80 overall player; my rankings do take to a smaller degree 12-team mixed leagues.

Based on available names in said mixed leagues, Trout's owners can expect to roster outfielders like David Peralta, Max Kepler and Hunter Renfroe in his stead. From a projections standpoint, those owners can expect to get roughly a .255 batting average, four home runs, 14 RBIs, one stolen base and 15 runs scored during a 47-game Trout absence. Adding those to Trout's numbers, then comparing again:

Jones, incidentally, is my No. 83 overall player and No. 27 outfielder.

Rest tight, Trout owners. You can navigate through this, especially in the shallowest mixed leagues.

The new No. 1 player

Perhaps as compelling a debate as Trout's new ranking spot is who takes over his coveted spot atop the going-forward rankings.

Several names obviously come to mind: Paul Goldschmidt, currently the top-ranked healthy player on our Player Rater; Clayton Kershaw, a top-10 name on the Player Rater and one of only four players with 200-plus points in ESPN's standard points-based scoring; as well as Mookie Betts and Jose Altuve, the Nos. 1 and 2 players on the final 2016 Player Rater.

Then there's Bryce Harper, who like Trout is one of the game's brightest young stars, and who is performing similarly to his 2015 MVP form. It might seem strange to see a player likely headed for a suspension for charging the mound on Monday in the No. 1 spot -- dock Harper a couple of games -- but Harper's raw ability, specifically his contributions in terms of batting average and home runs, is practically unparalleled. As a heart-of-the-order hitter for a deep Washington Nationals offense, Harper also benefits from a counting-numbers (read: RBIs and runs) boost that few others receive.

Harper doesn't enjoy the advantage in the No. 1 spot ahead of his brethren that Trout did -- the case can easily be made that multiple names might rotate through the top spot during Trout's absence -- but with Harper on the roll he's on, he's the one name who warrants the "blank check" treatment on the trade market.
Related topics:
sportsespnprojectionsfantasy mlbmlbfantasynews fantasytristan h cockcroftanalyticsrankingsstatsmike troutlos angeles angelsbaseballbryce harper
Copyright © 2020 ESPN Internet Ventures. All rights reserved.
More Videos
From CNN Newsource affiliates
TOP STORIES