How Seimone Augustus, the 'Original Lynx,' helped build Minnesota into a dynasty 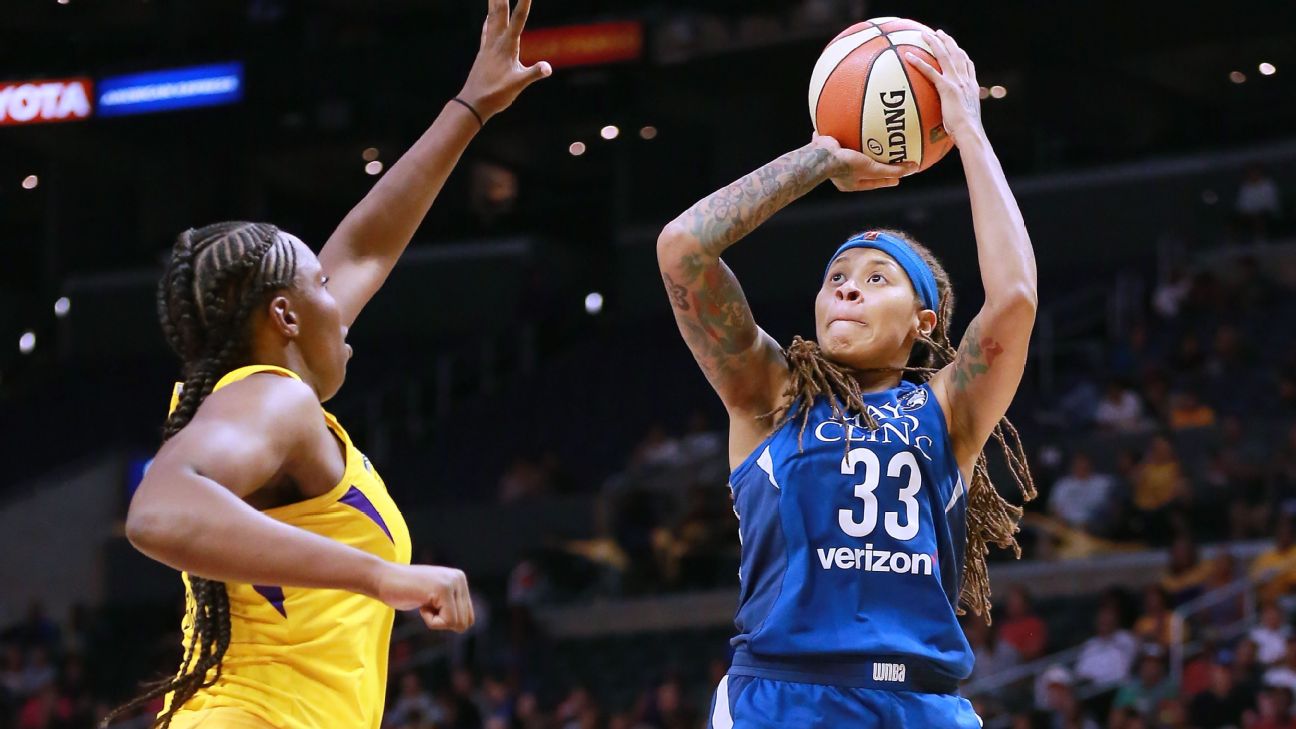 MINNEAPOLIS -- The year after the Minnesota Lynx had won their fourth WNBA championship, local drivers would crawl through downtown, just off South 7th Street and Hennepin Avenue, and see the outstretched arms of Maya Moore on a Jordan Brand billboard affixed to the Target Center.

Moore, the 2014 WNBA MVP, was a superstar, and the face of the iconic Lynx teams that won four titles in seven seasons from 2011 to 2017. In Minneapolis barbershops, sports bars, church hallways and living rooms, however, they talk about "Mone."


Seimone Augustus' former teammates and coaches call her the catalyst of the Lynx dynasty, the player who showed up for big moments but also played with a selflessness that made a roster loaded with talent work.

"She's the original Lynx," said former Lynx star Lindsay Whalen, now the head coach for the Minnesota women's college basketball team. "People can say what they want about me. But we don't win any of those [championships] if it wasn't for Seimone. She was the one who started it off."

And that's why the city that loves her will say thank-you when Augustus returns on Saturday, this time as an assistant coach with the Los Angeles Sparks. It's Augustus' first trip to Minneapolis since last year's surprising departure, when in February 2020 she joined the Sparks as a free agent for her 15th and final WNBA season after negotiations fell apart with the franchise she helped transform.

A ceremony before Saturday's Los Angeles-Minnesota game will acknowledge all that Augustus -- who abruptly announced her retirement May 13 on the eve of the WNBA season -- achieved with the Lynx. She is one of the league's most decorated players, the No. 1 overall draft pick and Rookie of the Year in 2006, the 2011 WNBA Finals MVP and an eight-time All-Star. The Baton Rouge, Louisiana, prodigy with the killer crossover and smooth jump shot also won three Olympic gold medals with the U.S. women's national team, led her hometown LSU Tigers to three consecutive Final Four appearances and was a two-time national player of the year in college.

But a celebration of Augustus' accomplishments would be incomplete without a nod to her first five seasons in Minnesota, when she played for four different head coaches and the team never finished above .500. Still, Augustus remained loyal even in a difficult chapter for the Lynx, laying the foundation for the success that followed.

"I mean, Minnesota knows that they have a piece of my heart," Augustus said at an emotional retirement news conference in May. "I gave them everything, 14 years, that I could give, and I felt that in return, the fans were always amazing. And they still are."

A young star for a city that needed one

To understand Augustus' impact on the Lynx, it's important to understand the Minnesota sports climate toward the beginning of the team's run in the WNBA. Two years before the Lynx captured their first championship in 2011, the Minnesota Timberwolves -- who were midway through a 14-year playoff drought at the time -- had twice decided against drafting Stephen Curry.

The Minnesota Wild were stuck in a four-year hiatus from postseason play and the Minnesota Twins, it was clear, were never going to get past the Yankees. Finally, the Minnesota Vikings had just swung and missed on a second magical season with Brett Favre that never materialized and fired coach Brad Childress.

Then, in 2011, the Lynx drafted Moore, a UConn star and one of the most accomplished collegiate players in the history of the game. And the Lynx, who had finished 13-21 in 2010 -- Augustus suffered a torn ACL in June 2009 and then was hampered by medical issues that limited her to 25 games in '10 -- suddenly seemed capable of competing for a title.

But they needed Augustus to make that happen. The buzz surrounding Moore might have rattled other players. It encouraged Augustus, the key to the team's bond.

"She's the Pied Piper," Lynx coach and general manager Cheryl Reeve said. "Everybody wants to be around Seimone. And wherever she was, people were laughing, so she had the role as a teammate that humor was at the center of how she rolled with them. She could cut up with the best of them. That was her sweet spot. ... I think for me, as a coach, bringing levity, sometimes to a tense situation, was an art form for her. And I needed her."


But the jokes stopped on the court. The Lynx were molded by an intensity in practice few teams could match. Augustus set the tone in those sessions and helped her gain the admiration and respect of a talented crew.

"This is a team with Maya Moore, Sylvia Fowles, Rebekkah Brunson, me," said Whalen, who was part of arguably one of the best starting fives in WNBA history. "If it's a two-point game, if we're down one and we need a bucket, we're going to Seimone. We're going to Seimone and somehow, some way, she's going to get it and make a play. And that's why we were so successful, because we were confident she was going to make a play."

That collective chemistry led the Lynx to WNBA championships in 2011, 2013, 2015 and 2017, the greatest run in Minnesota sports history since the Minneapolis Lakers dominated pro basketball with George Mikan in the 1950s.

Augustus always seemed destined for greatness. When she was a freshman in high school, she graced the cover of Sports Illustrated for Women -- a monumental moment for a prep star -- with a story titled: "Is She the Next Michael Jordan?" "It was almost like the ball was made for her hand," said Alvin Stewart, Augustus' coach at Capitol High School in Baton Rouge.

Stewart coached the boys' and girls' teams at Capitol. During the 2001-02 season, Brandon Bass, who played more than a decade in the NBA, was a star on his team and the No. 10 prospect in the country, per ESPN, in the esteemed 2003 boys' recruiting class led by LeBron James. But Augustus & Co. were the city's hottest ticket, so the boys' team would play before the girls' team, which was the headliner.

People wanted to see Augustus play. Stewart said officials would sometimes get caught up in the hype, too.

By then, she'd already been on LSU's radar for years. Former LSU head coach Sue Gunter, who died in 2005, would tell then-assistant Pokey Chatman to leave practice early to watch the local prodigy who, while soft-spoken, played with a temerity beyond her years.

"I'm tripping because the stands were packed for a middle school game in the middle of the day, and I can remember watching this kid who had this nasty crossover in middle school and I'm thinking, 'Wow!'" said Chatman, Augustus' head coach during LSU's Final Four runs in 2005 and 2006. "She's in middle school and we have to wait four more years? She could get a scholarship and be productive and impactful now."

At LSU, Augustus continued to excel on the court without losing her down-to-earth personality.


Her teammates would chuckle whenever she'd impersonate their coaches. She'd developed a running joke about former LSU assistant Bob Starkey sleeping in his office and dreaming about basketball. That always made the whole room laugh. But her demeanor would sometimes confuse them, too -- until it was time to play.

"She's so unassuming because she doesn't walk around with this huge ego," said Scholanda (Hoston) Dorrell, Augustus' teammate at LSU and a former WNBA player. "It's almost like this nonchalant, really laid-back [vibe]. It's like, 'Are you here today?' And then she'll get out there and light you up for 30 like it's nothing."

Augustus always responded to the moment. That trait changed the trajectory of the Lynx franchise.

"I think the emotions [on Saturday] will be a little bit more overwhelming than with anybody else because she was drafted to Minnesota," said Rebekkah Brunson, a Lynx assistant who played with Augustus on those championship Lynx teams. "There is so much that has happened [here], with her being a rookie and just trying to figure it out, to being with a franchise that really wasn't winning at that moment, to playing in front of limited fans and arenas that really weren't packed. And then to watch the transformation of the team, that had to be a special ride for her."

Reeve said she probably won't say much to Augustus prior to Saturday's game because of their shared competitive drive to "kick each other's ass." But she admitted she'll always wonder if Augustus' time with the franchise could have ended differently.

"When you look back, you sure wish it didn't happen," said Reeve of Augustus leaving Minnesota. "I certainly, with that group, always had an intention of each one of them being able to write their own ending, their own story. But it was to be a Lynx."

And that's what makes Saturday special. It's a proper goodbye for a star who gave the city something to brag about.

The Lynx were a dominant force stacked with legit stars. Whalen was the Minnesota legend who'd returned to lift the local WNBA team. Brunson was the wise and relentless veteran who gave the Lynx the toughness they needed. Moore was the superstar with a Jordan Brand deal and a set of rare skills to justify all of the attention.

To those who followed the team during those fruitful years, however, Mone was the heart of that franchise.