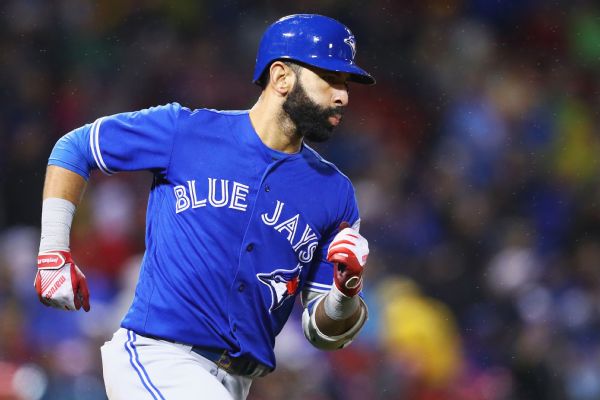 The AL Championship Series received some extra juice for Game 3 after the Cleveland Indiansengaged in a little trash talk via their Twitter account after Toronto Blue Jays slugger Jose Bautista complained about how his team was treated in the first two games of the series.

The Indians lead the series 2-0.

Bautista told reporters on Sunday that the Blue Jays were victims of "circumstances," seeming to imply that the umpires in the first two games in Cleveland were biased against Toronto's hitters.

A social media editor for the Indians' verified Twitter account seized on the quote to introduce their theory for why the Jays scored only one run in their two losses to begin the series.

Kluber started ALCS Game 1 for the Indians, Tomlin started Game 2, and Miller and Allen appeared in relief in both games.

On Monday, the Indians asked their Twitter followers what their opponent's next excuse will be.

Bautista and Edwin Encarnacion have complained about the umpiring during the first two games of the series, during which the Blue Jays have gone 10-for-63 with no homers. Both deflected questions about the umpires in postgame interviews, declining to go into full detail.

On Sunday, Bautista still wouldn't fully explain his feelings, but he seemed to go further.

"All you have to do is go look at video and try to count the number of pitches they have thrown over the heart of the plate," Bautista said. "It hasn't been many. They've been able to do that because of the circumstances -- that I'm not trying to talk about because I can't. That is for you guys to do, but you guys don't really want to talk about that either."
Related topics:
sportsespncleveland indianspostseasoncircumstancesmlbjose bautistaamerican league championship seriesrotationandrew millertweettoronto blue jaysjosh tomlincody allentwitteralcsstrike zonecorey kluberumpiresedwin encarnacionplayoffs
Copyright © 2022 ESPN Internet Ventures. All rights reserved.
TOP STORIES
Person of interest ID'd after 6 killed, dozens hurt in IL shooting
Highland Park parade shooting victims range in age from 8 to 85
Suspect arrested in alleged sexual battery inside OC storage facility
3 killed, at least 6 injured in multi-car crash in Winnetka
1 killed in street racing crash in Jurupa Valley
Joey Chestnut, Miki Sudo win Nathan's Hot Dog Eating Contest
Hip-hop dance icon Bruno 'Pop N Taco' Falcon dies at 58 in SoCal
Show More
Burger King worker goes viral; more than $320K raised on GoFundMe
Heat from Woodland Hills building fire detected from space, NWS says
16-year-old girl wounded in Long Beach shooting
4th of July Parade held in Huntington Beach
Man killed in Jefferson Park shooting after intervening in argument
More TOP STORIES News