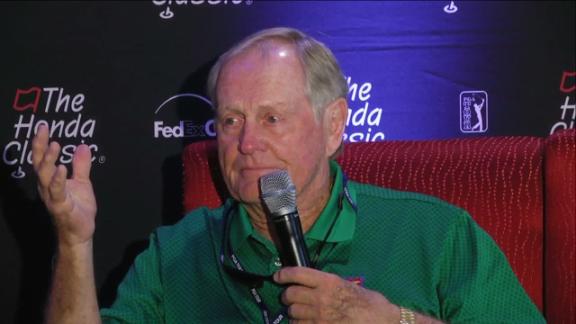 PALM BEACH GARDENS, Fla. -- Tiger Woods told the world last week that he was "progressing nicely" following his latest back surgery. Jack Nicklaus thinks Woods might be doing better than that.

Nicklaus and his wife, Barbara, hosted a dinner for potential U.S. Ryder Cup players at their North Palm Beach home Thursday night, and Woods attended, having already committed to being a vice captain under Davis Love III.

Nicklaus relayed what others who were there have said about Woods.

"He says he was feeling great and he was able to stand over a putt and chip now without having any leg pain or so forth," Nicklaus said.

Nicklaus appeared at the Honda Classic on Sunday as he is involved in the tournament's charitable initiative but ended up spending an hour discussing a variety of subjects with reporters. Of course, Woods was one of the questions.

Nicklaus said they spoke on several topics, understood that Woods has no timetable for his return to golf, and reiterated that he hopes the 14-time major champion can resume his quest to tie Nicklaus' record of 18.

"Nobody wants their records to be broken, but I don't want you to not have the ability to have the opportunity to do so by your health. ... No, he looked great and he was in great spirits," Nicklaus said. "The guys enjoyed having him at the dinner. We had a lot of nice back and forth about how to play golf and this and that and so forth. It was a very, very nice evening. I hope the guys enjoyed it."

Nicklaus, 76, said he had no doubts about Woods' ability despite his age.

Nicklaus won two major championships in 1980, the year he turned 40. At this point, however, it is unclear if Woods will even play in any of the major championships this year. He's not played competitively since August, and it appears he just recently started hitting shots again.

As for the Ryder Cup dinner, Nicklaus said he enjoyed telling stories and was flattered to be part of it -- although he wonders how much influence it will be when the Ryder Cup rolls around in September.

"I can't imagine how them coming over to have dinner at an old man's house is going to help any," he said.