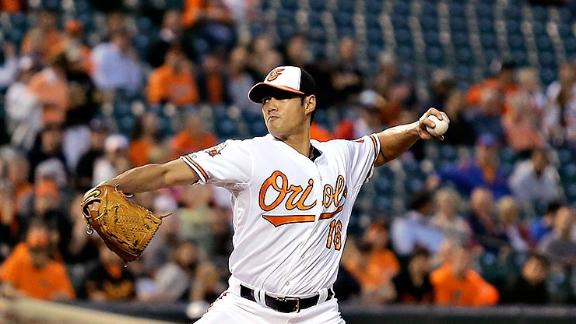 KANSAS CITY, Mo. -- A day after throwing some potential bulletin board material the Baltimore Orioles' way, Kansas City outfielder Jarrod Dyson said the Royals are close to taking the fight out of their American League Championship Series opponents.

After the Royals beat Baltimore 6-4 to take a 2-0 lead in the best-of-seven ALCS, Dyson was asked by Kansas City Star writer Andy McCullough if he expects the series to return to Camden Yards for a sixth game. "No, sir, I don't," Dyson said, "and I don't think [the Orioles] think that, either."

Given an opportunity to elaborate on those comments after a team workout Sunday at Kauffman Stadium, Dyson took the concept of postseason candor to a higher level when speaking to a handful of reporters in the Kansas City clubhouse.

"I'll just tell you this, man: If we win Game 3, it's going to be hard for them to sit there and look themselves in the mirror and say, 'We can win the next four,'" Dyson said. "That's tough to do, man. Everything must click. I'm just being honest.

The Royals seized control of the ALCS with back-to-back victories in Baltimore on Friday and Saturday and have history on their side: Since the League Championship Series went to a seven-game format in 1985, 11 teams have lost the first two games at home before going on the road. None of the 11 came back to win the series.

Dyson, a speedy fourth outfielder known for his baserunning and defense, has entertained reporters through the postseason with his candid and sometimes rambling clubhouse discourse. He said Sunday the Royals have surprised people throughout the playoffs with their high caliber of play. They beat Oakland in the wild-card game, they swept the Los Angeles Angels in the Division Series, and they took two straight in Baltimore.

"I don't think [the Orioles] expected us to come over there and play as well as we played," Dyson said. "A lot of people think we're playing on pure luck. But I feel like it's pure determination, belief and will. I feel like these guys really have their minds set, and they're hungry for a World Series."

Dyson added he's not concerned the Orioles might view his comments as dismissive or use them for motivation.

"I don't know what they're gonna do, but I know what we're gonna do," he said. "We're going to keep going out there and trying to hit them in the mouth early, hoping that they don't get back up when we knock them down. But somehow they always get back up."

Orioles players, for their part, declined to engage in a back-and-forth when asked about Dyson's initial suggestion the Royals have planted a seed of doubt in the Baltimore clubhouse.

"I believe that we're coming back [to Baltimore]," outfielder Nelson Cruz told reporters. "What's important is what we believe here. It doesn't matter what people think outside these doors. That's my only answer."

Added Orioles catcher Caleb Joseph: "I'm not worried about what he says. We've got bigger fish to fry than that. He's probably trying to make it [bother us], but come on."

Must Win For Orioles?
Wei-Yin Chen faces Jeremy Guthrie in Game 3 of the ALCS with the Orioles looking to avoid a 3-0 deficit.

Royals Grab 2-0 Lead
Baseball Tonight Spotlight: Lorenzo Cain collected four hits, and the Royals scored two runs in the ninth to defeat the Orioles 6-4 and take a 2-0 lead in the ALCS.