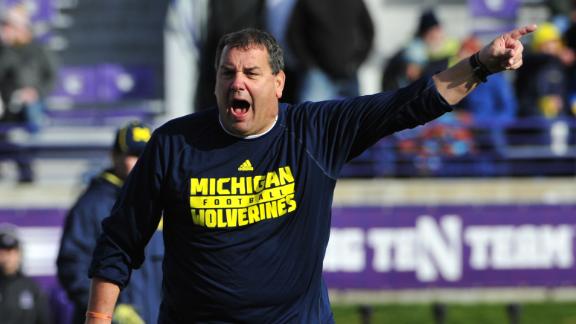 ANN ARBOR, Mich. -- It's not yet clear when a decision will come on Brady Hoke's future as Michigan's football coach, but interim athletic director Jim Hackett said Saturday he would be the one making the decision.

Hackett stepped in as a temporary leader of the university's athletic department Oct. 31, when former athletic director Dave Brandon resigned. Hackett met with the media for the first time in his new role Saturday afternoon and ran through his top priorities, which included evaluation of the football team at the end of the season.

Hackett declined to provide any specific criteria he would use when evaluating the program and Hoke, but said Michigan has no plans to hire a new, permanent athletic director before he decides if any changes are needed with the football team.

"We have a football coach who has had a long history of being a good coach," Hackett said. "He knows we're not where we need to be right now."

Hoke and Hackett have met several times during the last month. Hackett said he thinks the coaching staff has done "an extraordinary job" of working through the adversity they have faced this year. He added that he doesn't feel pressure to make a decision immediately in order to help the team reach a more settled situation during crucial recruiting months.

"I watch how people behave in adversity. These guys have shown up every week and played hard," Hackett said. "I'm also proud of the coaches' ability to work extremely hard during that situation."

Hackett, who recently retired from his position as the CEO of office furniture giant Steelcase, said he hasn't decided whether he would be interested in staying in the director's office on a permanent basis. His focus right now, he said, is strictly on improving the student experience for Michigan sports, continuing plans to upgrade facilities and evaluating the football team.

Michigan (5-6) lost toMaryland, 23-16, in its final home game Saturday afternoon and will face rival Ohio State in the regular-season finale. A win would qualify the Wolverines for a bowl trip.

When asked, Hackett didn't clarify if he would be making decisions about the program at the end of the regular season or after a potential bowl game.