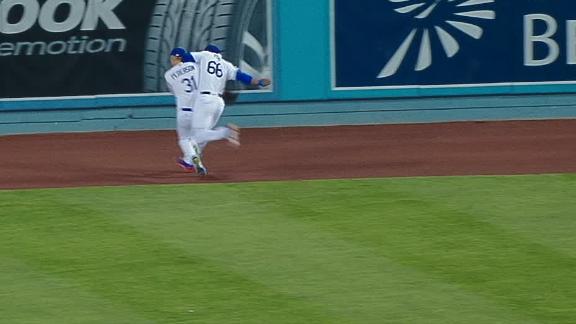 LOS ANGELES --Dodgersoutfielder Joc Pederson left a game against the St. Louis Cardinals after a frightening collision with Yasiel Puig on the warning track Tuesday night.

Just before crashing into Pederson, Puig sprinted from right field to right-center and caught Yadier Molina's long fly ball to end the 10th inning. Puig's left elbow appeared to knock Pederson on the side of his head, and Pederson's hat and glove went flying as the center fielder slammed face-first into the outfield wall.

Puig momentarily remained on his feet, raising his glove to show he had caught the ball, before grabbing his chest and dropping to the track.

Both players stayed down for a few moments, and Pederson appeared to have blood on his forehead when he finally stood. Pederson, who the Dodgers said suffered a neck sprain, was lifted for pinch hitter Chris Taylor in the bottom of the inning, then replaced in center by Enrique Hernandez in the 11th. Puig returned to the outfield for the next inning.

Pederson narrowly avoided a scary collision in the seventh inning, when he and left fielder Cody Bellinger bumped each other while chasing a ball in the left-center gap.

Dodgers manager Dave Roberts said following his team's 2-1 winthat Pederson took a forearm to the jaw and is having some trouble moving his head to the right, but that a stint on the disabled list is not likely at this time. Roberts also said Pederson passed the concussion protocol.

"My neck is a little stiff. We'll see [Wednesday]," Pederson said. "I already did some treatment [Tuesday night]. I'll come back [Wednesday] and see where I'm at."

Puig said his ribs are sore, but he hopes to play Wednesday.