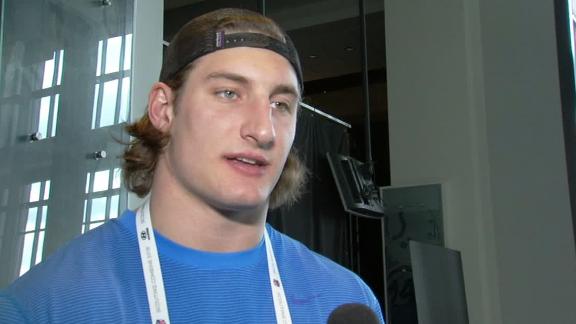 INDIANAPOLIS --Ohio Statedefensive end Joey Bosa acknowledged that a lot of great players will hear their names called at the NFL draft, but he believes he's the top prospect.

"I do believe I'm the best player in the draft," Bosa said Friday at the NFL scouting combine. "There's, of course, a lot of amazing players in the draft, and it's going to be up to Tennessee to make that decision. But I think as a top player, if you don't believe that, then there is something wrong.

"I think I bring the best pass-rusher, the best defensive lineman in the country."

The Titans, who hold the No. 1 overall pick in the April 28 draft, run a flexible 3-4 scheme under assistant head coach/defensive coordinator Dick LeBeau. Bosa played in a 4-3 defense at Ohio State.

Bosa said he'd be more comfortable in a 4-3 scheme, at least initially, but he came to Lucas Oil Stadium ready to do linebacker pass-coverage drills knowing he could be relocated in a different scheme.

"I can see myself playing really anywhere on the defensive line," Bosa said. "I've been working standing up, been working on my linebacker drops, so I definitely feel like I am ready to play in a 3-4 or a 4-3."

He weighed in at 269 and said his workouts -- two per day, six days per week -- thinned him some, but said putting on a bit more weight at a team's request won't be difficult.

In interviews with teams, he plans to address his suspension for Ohio State's 2015 season opener resulting from a violation of athletic department rules.

Bosa delivered a couple of good lines as he addressed reporters Friday morning, saying he couldn't see himself moving from Joey to Joe until he was at least 50 years old. He also said he was unfazed by the media coverage.

"After meeting with a bunch of NFL coaches," he said, "you guys are nothing."