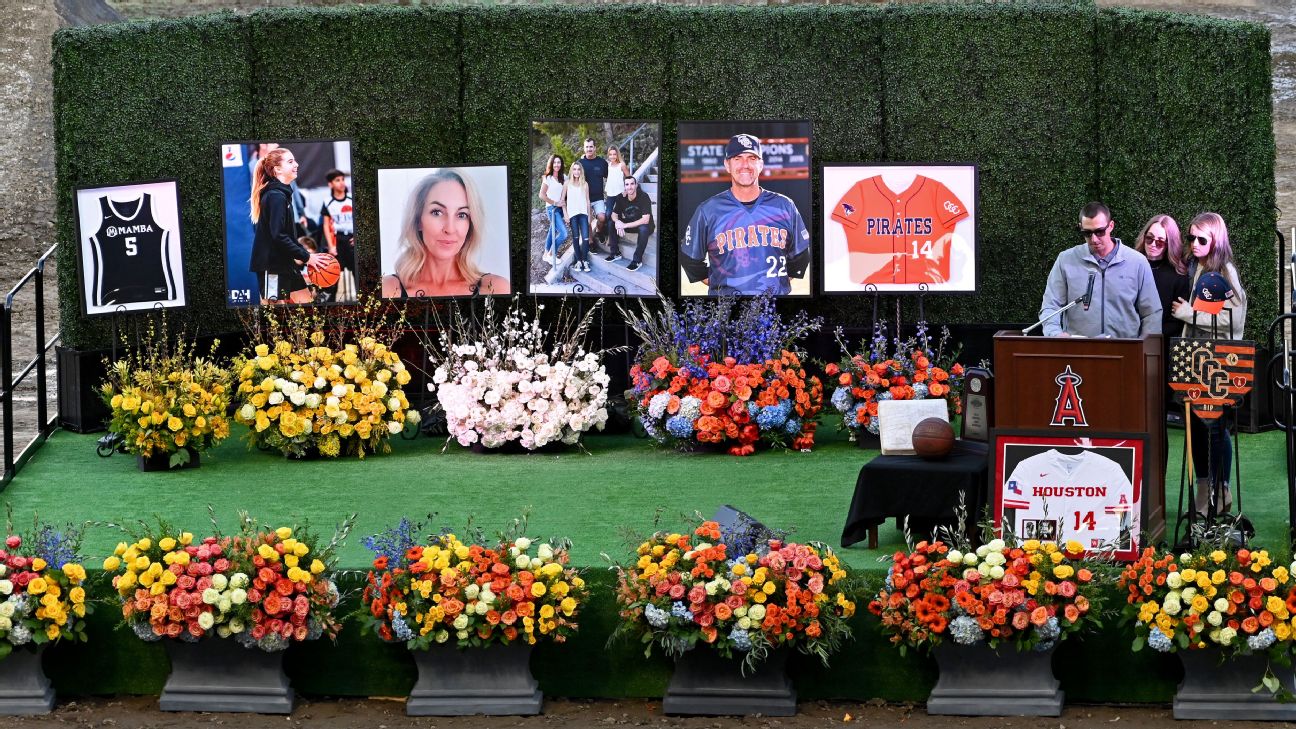 ANAHEIM, Calif. -- The smiling faces of baseball coach John Altobelli, his wife, Keri, and their daughter Alyssa shined in photos and videos of them hitting the baseball field, the basketball court and the beach, which werecast on screens Monday at Angel Stadium.

But as friends and family remembered the couple and their teenage daughter, killed in last month's helicopter crash that also claimed the life of basketball star Kobe Bryant, many couldn't help but break into tears.

Several thousand people poured into the stadium in Anaheim, California, for a public memorial honoring the award-winning coach of Orange Coast College baseball, who was known for leading his team to four state titles and helping young players grow and develop on and off the field. Scores of them were in the stadium Monday, along with current members of local college teams, wearing their jerseys.

"We have no clue how many teachers, police officers, firefighters, dads and husbands that he helped develop along the way," his longtime friend Josh Belovsky told the crowd. "Those are the wins that he cherished the most."

The 56-year-old coach known as "Alto" won more than 700 games in his 27 years coaching the team and was named coach of the year by the American Baseball Coaches Association last year.

The Altobellis were among the nine people killed Jan. 26 when a helicopter carrying them to a youth basketball tournament crashed in foggy weather in Calabasas, California.

Bryant and his daughter Gianna, Sarah Chester and her daughter, Payton, Christina Mauser -- who helped Bryant coach the teenage girls' basketball team -- and helicopter pilot Ara Zobayan were also killed. A public memorial for the former Lakers superstar, his daughter and other victims is scheduled for Feb. 24 at Staples Center.

On Monday, the memorial began with the reading of the nine names of the victims. From a podium covered with flower bouquets, photos and sports jerseys, family and friends shared memories and messages of support for the Altobellis' son, J.J., a scout with the Boston Red Sox, and 16-year-old daughter, Lexi.

Alyssa Altobelli, 14, attended Ensign Intermediate School in Newport Beach, which retired her jersey, and hoped to someday attend the University of Oregon. She loved basketball and found ways to get to the gym even when practices were canceled, said Emily Eadie, her teammate.

"If anyone was in a bad mood at practice, she would smile and laugh to help brighten the day," she said. "Without her, our team will never be the same."

A video was shown of Alyssa bounding down the court, her ponytail bouncing. She loved animals and took turtles home from science class when she feared they were being mistreated, her friend Sammy Forbath said.

Keri Altobelli, 46, was remembered as loyal, strong and wholly dedicated to her family. Allison Eadie said the two spent so much time on bleachers watching their daughters play basketball that they joked about having their names engraved on plaques there. "It was evident she would do absolutely anything for those that she loved," Eadie said. "When she had your back, you didn't need anyone else."

Pastor Erik Rees recalled meeting the John Altobelli eight years ago. At the time, Rees was grieving the loss of his 12-year-old daughter to cancer, and Altobelli, who dedicated a game to her, met Rees at third base and gave him a hug, promising to support him and his family.