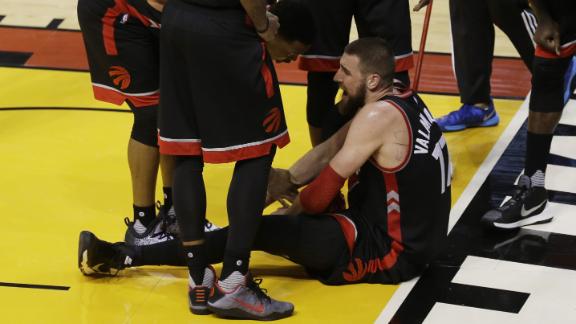 MIAMI -- Raptors center Jonas Valanciunas will miss the remainder of Toronto's second-round playoff series against the Heat with a sprained right ankle, the team announced Sunday.

"It's a big loss for us obviously since he was having a great series and a great playoffs," Toronto general manager Masai Ujiri said. "It's a big, big blow for us and a big blow for JV. You feel for the kid. I just met with him ... it's tough on him, it's tough on his teammates, but this is life in the NBA and we just have to carry on."

Valanciunas suffered the injury in the third quarter of Toronto's 95-91 Game 3 win over the Heat on Saturday afternoon while contesting Heat guard Dwyane Wade's layup attempt at the rim.

"He's down," Ujiri said. "When you have a guy like that and he's playing that well you feel like the sky is the limit. He's going to do everything to get back and is working to get back."

There is no timetable for his return, and the grade of the sprain at this point is unknown.

Valanciunas stayed down after falling awkwardly before getting up and limping to the locker room. The team initially said he would not need X-rays, but then Valanciunas did undergo precautionary X-rays, which were negative.

"He's been playing so well," Raptors point guard Kyle Lowry said. "He was hitting such a great peak right now, his confidence was sky-high, but for us as a team, it's next man up. That's kind of how we always play."

Valanciunas had 16 points and 12 rebounds at the time of the injury for his fourth straight double-double of the playoffs. For the postseason, he is averaging 15.0 points and 12.1 rebounds on 55 percent shooting. He was a team-high plus-39 in Games 1-3 against Miami.

Toronto coach Dwane Casey will presumably elevate reserve Bismack Biyombo, who started 22 games during the regular season when Valanciunas injured, into the starting role. Other bigs on the roster include Luis Scola, Jason Thompson andLucas Nogueira. Casey could also choose to play a small lineup featuring Patrick Patterson at center in short spurts.

"We can't change schematically or philosophically what we do so that's not going to change," Casey said. "It doesn't matter who starts -- that person is going to have to come in and fill the role of screening, rebounding, defending his position and adding to the team."

Miami center Hassan Whiteside could also be out for the foreseeable future after an MRI revealed that he has an MCL sprain of his right knee. The Heat have listed Whiteside as day to day. The Raptors lead the series 2-1.

Valanciunas was back at the hotel and will address reporters on Monday morning prior to Game 4.