Jordan Spieth will lose No. 1 ranking after missing cut at the Barclays 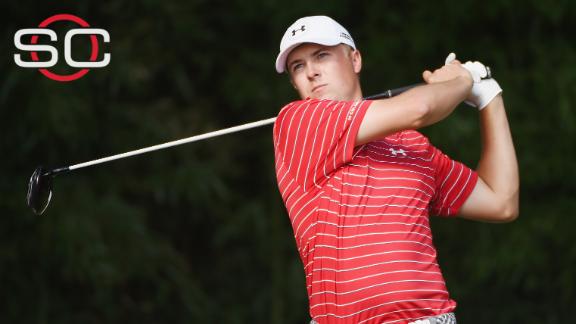 EDISON, N.J. -- With rounds of 74-73, Jordan Spieth lost more than an opportunity to continue playing the Barclays this weekend.

He lost his No. 1 world ranking.

Following a second-place finish at the PGA Championship two weeks ago, Spieth leapfrogged Rory McIlroy on the formula-based ranking, becoming the second-youngest player ever to hold the coveted top spot, behind only Tiger Woods.

A missed cut at the PGA Tour's opening FedEx Cup playoff event, however, ensured the 22-year-old's initial reign will be a short one, ending after just 14 days when the points are recalculated Monday.

"I've reached that peak already, and I know it's going to be close enough to where if I just get the job done next week, I'll be back in that ranking," Spieth said after Friday's round. "That ranking, it's great once you reach it, but it's not something that I'm going to live or die on each week."

Two weeks still isn't the shortest reign for a No. 1-ranked player. Tom Lehman held that position for just one week in 1997. After Woods reached that pinnacle the same year, he lost it one week later.

This was an uncharacteristic week for this year's Masters and U.S. Open champion, as he could never seem to create any momentum through two days at Plainfield Country Club. He posted five bogeys and a double-bogey during each of the two rounds.

Adding further insult to both his result and losing the No. 1 spot was the fact that Spieth incurred a penalty after stepping on his ball in a hazard on the 12th hole. Following the round, he spoke at length with PGA Tour rules officials, who determined that he did indeed need to assess himself a 1-stroke penalty for the infraction.

Not only will Spieth lose his place atop the world ranking, his No. 1 spot on the FedEx Cup points list is now in jeopardy, as well. With the points recalibrated entering the four-tournament series, current Barclays leader Bubba Watson has an opportunity to overtake him with a win this weekend.

"Billy Horschel won the FedEx Cup after missing the cut in the first event last year, and I'm in a better position to win the FedEx Cup than he was at the time," Spieth said. "So why can't I do it, you know?"

Spieth insisted that if there's a silver lining to the missed cut, it's that next week's Deutsche Bank Championship doesn't begin until Friday, giving him an extra day to work on his game.

"I'm definitely searching for answers," he said. "I don't know exactly what I'm going to do from here as far as how I get prepared for next week, but I have some time to figure it out. We don't start 'til Friday."