Josh Rosen 'pissed' he fell to Cardinals at 10th pick: 'There were nine mistakes ahead of me' 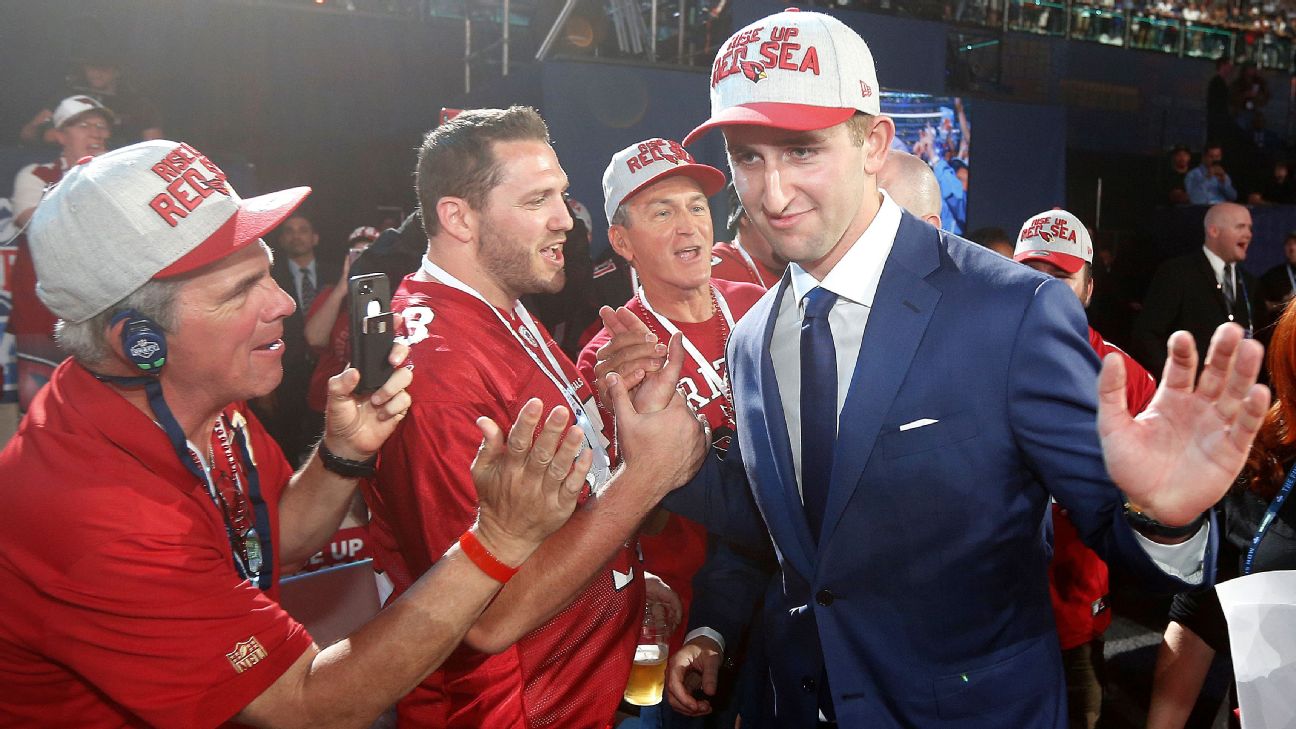 TEMPE, Ariz. -- The longer Josh Rosen waited in the green room inside AT&T Stadium, the more mad -- and more motivated -- he became.

After being selected by the Arizona Cardinals with the 10th overall pick Thursday night in the NFL draft, Rosen told reporters that he was "pissed" and "really angry" he fell outside the top three.

"There were nine mistakes ahead of me," Rosen said.

But when the Cardinals finally selected him after trading three picks this year to the Oakland Raiders to move up and snag the former UCLA quarterback, Rosen was relieved and inspired yet still unhappy all at once.

"I thought I should've been picked at 1, 2 or 3," Rosen said. "I dropped, and I was pissed. I was really, really angry. I wasn't really showing it. I was trying to keep calm, cool, composed. But I thought I was going to get picked, and I thought I was going to have to put on a face and try and fake happiness. But for some reason, right when I got that call, that's not what happened. I got really happy and really motivated.

"All I wanted to do was basically get on a plane right then and go straight to Arizona and start working. It was definitely a surprise when I got that phone call in terms of the emotions I was feeling. But I think everything happens for a reason."

Rosen found a home he seems happy with, and the Cardinals drafted their quarterback of the future. Rosen's selection marked the first time fourquarterbacks were taken in the top 10 in the common draft era.

General manager Steve Keim said he did "quite a bit of work" on Rosen, who said his visit with the Cardinals was "just like any other visit." He didn't leave Arizona feeling like the Cardinals would certainly draft him, but he didn't leave sensing they would pass if given the opportunity.

"Today was an indication of how we felt about Josh Rosen," said Keim, who scouted Rosen twice in person.

Keim said Rosen is "one of the most mechanically sound quarterbacks to come out in some time" and called him "arguably the most intelligent" player in this year's draft.

New coach Steve Wilks said Rosen did a "great job" with offensive coordinator Mike McCoy at the board during his visit and added the team was impressed with Rosen's "command of the room."

So why did Rosen drop from a potential top-three pick to the bottom of the top 10?

Rosen enters a Cardinals quarterbacks room alongside veterans Sam Bradford and Mike Glennon, who both signed with Arizona as free agents in March. But Rosen, who said he "obviously" wants to be the starter, doesn't plan on creating havoc internally.

"But we're all professionals, and we're going to compete our butts off. Regardless of who the starter is, we're all going to support that person."

As of now, Arizona's starter is Bradford, according to Wilks. But Wilks also didn't commit to Bradford in Week 1, instead saying that the best 11 players will be on the field.

Rosen was openly critical of President Donald Trump in a 2016 Instagram post that showed him wearing a hat with a ribbon that said "F--- Trump" on it while golfing at one of Trump's golf courses. He will be living and playing in a conservative state, but Rosen isn't worried about that.

And Rosen, who developed a reputation in college for speaking his mind, doesn't plan on changing now that he is in the NFL.

"Maybe if I shut up these last three years, I could've been picked higher, but I don't want that," he said. "I want to be me. The Arizona Cardinals know what they're getting. They're not going to get a kid that's going to say stupid things and piss people off unnecessarily. They're going to get a kid that everyone knows who they're getting every single day that I walk in the building."

Rosen: 'There were nine mistakes made ahead of me'
Tenth overall pick Josh Rosen was "pissed" he fell in the draft but is excited to make the teams who did not select him pay.