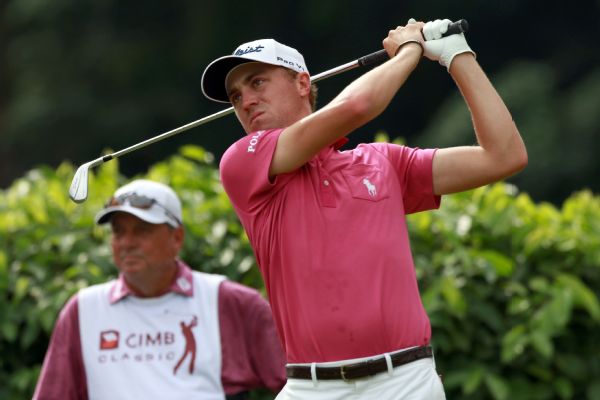 HONOLULU -- Justin Thomas finished with another eagle and put himself in the PGA Tour record book again Friday in the Sony Open.

One day after his 59 made him only the seventh player in PGA Tour history break 60, Thomas made an 8-foot eagle putt on the 18th hole at Waialae for a 6-under 64 to set the 36-hole scoring record on the PGA Tour.

Thomas was at 17-under 123 and had a five-shot lead over Gary Woodland. The previous mark was 124, last matched at the 2015 BMW Championship by Jason Day at Conway Farm.

"It's cool,'' Thomas said. "Just like yesterday, anytime you can get your name in the record book, it's awesome. I had no idea until I finished.''

Thomas started slowly, not picking up his first birdie until the fifth hole. Irritation from a three-putt bogey on the eighth hole got him going, and Thomas ran off four straight birdies around the turn.

From there, no one got closer than four shots on another ideal day for scoring off the shore just up the road from Waikiki Beach.

Woodland made a 10-foot birdie putt on the 18th hole for his second straight 64. Woodland and Thomas as part of the final group could be a real power show -- Woodland is regarded as one of the premier power players in golf, though he has been far more reserved off the tee, despite being tempted to hit driver.

"I did that my first couple times here and that didn't work out for me,'' he said. "I'm very comfortable with where my game is. Driver feels great, I just don't get many opportunities out there. I'm not complaining about being in the fairway, either.''

Thomas wasn't bashful. He smashed a 355-yard drive down the 12th fairway that set up a flip wedge to 12 feet for his fourth straight birdie. He also took an unusual line on the 14th, hammering a high drive over the trees and bunker down the left side and back into the fairway, leaving him 70 yards to the green on the 430-yard hole.

He pitched that up to just under 5 feet and missed the putt, one of the few he failed to convert.

Zach Johnson had a 61 and Olympic gold medalist Justin Rose shot 64. They were in the group seven shots behind along with Hudson Swafford, who opened with a 62 but could only manage a 68.

Jordan Spieth felt empty after rounds of 65-67, partially because he was nine shots behind and primarily because he had as many chances as Thomas over the last two days. Only one of them has been converting putt after putt.

"Just has a really cold putter this week,'' Spieth said. "I think it added to the frustration on the green, because the game is looking so easy to him. I felt like I was hitting the ball in the same location, I'm just being outdone on the green. That's something a little abnormal to me.''

That made Thomas, his best friend in golf for the last 10 years, chuckle.

"Now he knows how a lot of people feel,'' Thomas said.

Thomas never made it to the North Shore on Thursday after his 59, though he was happy to have missed out on Spieth and Smylie Kaufman's ocean adventure that included a capsized kayak. He approached the next day like any other, trying to hit good shots, get birdie chances and expand his lead.

He ticked every box, even picking up a record he knew nothing about. Thomas rolled in a 12-foot birdie from the collar left of the 15th green, only to give the shot back with a tee shot he pulled into the bunker. From the left rough, with the sun in his face, he belted it out and onto the green for another closing eagle.

Coming off a three-shot victory last week at Kapalua, he is in prime position to join Ernie Els in 2003 as the only players to sweep Hawaii.

"Someone has to go out and chase him.'' Rose was one shot out of the lead when he finished -- Thomas had yet to tee off -- and was hopeful of staying in range. Rose knows from experience that starting strong and holding it together for four rounds isn't easy. He shot 60 in the first round at Disney in 2006, stretched his lead early in the second round and by the end of the week was five shots behind the winner.

"You definitely need the mindset when you're that far ahead to keep the accelerator down,'' Rose said. "But it's hard to keep that sort of momentum going, for sure.''