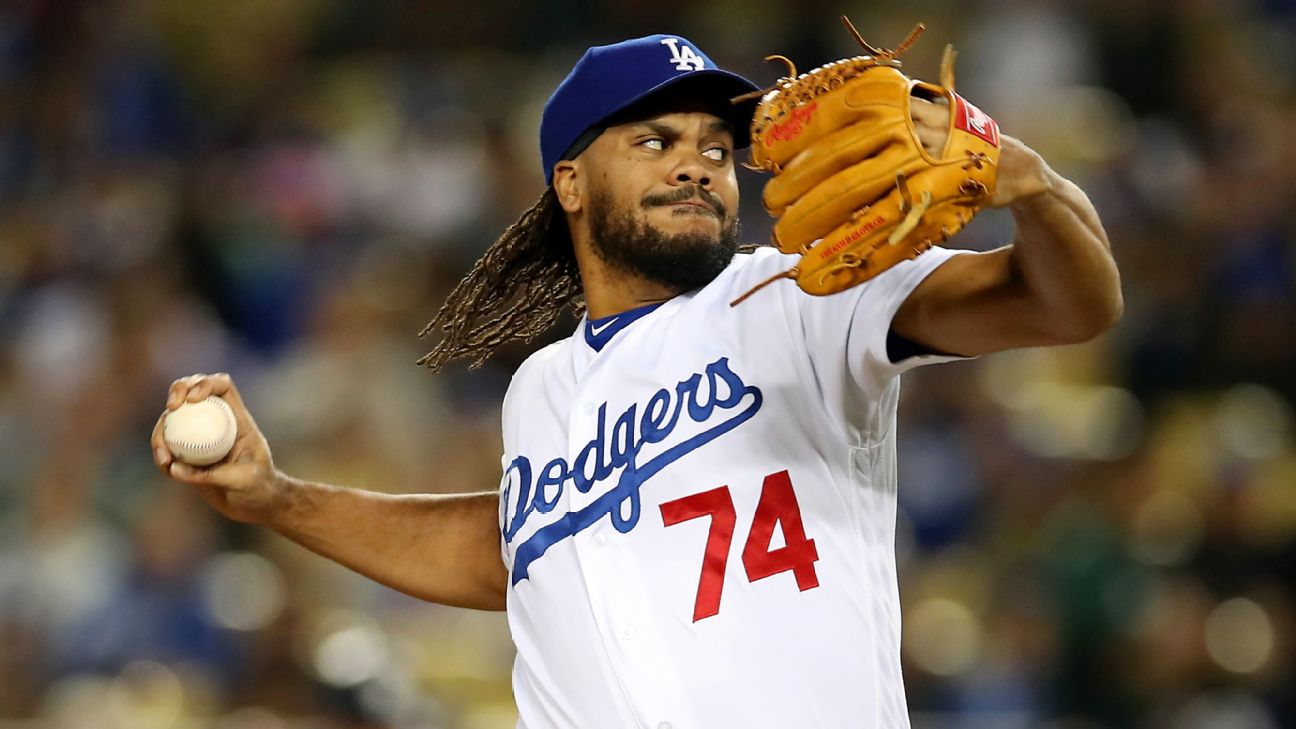 GLENDALE, Ariz. -- Kenley Jansen threw a cutter more than 85% of the time during the 2017 season. But when he faced Houston Astros third baseman Alex Bregman in Game 4 of the World Series, with two outs in the ninth inning of a game the Los Angeles Dodgers led by five runs, he was surprised by the way Bregman reacted to his two-strike slider, a pitch Jansen was throwing for only the 94th time all year.

"I've never seen a hitter sit on [my] slider," Jansen said before the Dodgers' second official workout on Saturday morning. "I threw a slider to Bregman, and he took me deep. Even if it was not a good pitch -- hitters don't seem to sit on my off-speed, on the best year that I had. But it is what it is, man."

Jansen, speaking a day after Cody Bellinger torched the Astros for their sign-stealing practices, wanted to keep the focus on the 2020 season, a particularly exciting one for the Dodgers after bringing in Mookie Betts and David Price. But Jansen couldn't help but voice his frustration over one of the greatest cheating scandals in baseball's prolonged history.

Jansen believes using technology to steal catchers' signs -- and, specific to the Astros, using a center-field camera and a trash can to alert hitters of upcoming pitches in real time -- is "worse than steroids," a statement echoed by Chicago Cubs third baseman Kris Bryant. Jansen believes the Astros' crimes were "worse than gambling, too." He didn't much care for their apologies.

"I can apologize," Jansen said. "I can go hit you in your face right now and apologize -- 'I'm sorry, I will be a better player' -- and not get suspended. What are you gonna teach kids out there? You're not gonna teach anything."

Jansen is among many in the Dodgers' clubhouse, and many others throughout baseball, miffed that none of the Astros players were punished for what was described as a player-driven system. Jansen believes teams caught illegally stealing catchers' signs should be disqualified for the upcoming playoffs, referencing Manchester City, which was recently barred from the Champions League for the next two seasons for breaches of European soccer's financial regulations.

Jansen said "everybody in the world is laughing" at MLB's handling of the Astros, but he can't help but think of how it has affected his own teammates. Jansen brought up Yu Darvish, who was derided by fans for allowing eight earned runs in 3 1/3 innings against the Astros in the World Series. And he brought up Clayton Kershaw, who surrendered two leads of three or more runs in a game that might have single-handedly decided the championship.

"I've never seen Kersh, in my life, have that comfortable of a lead in Game 5 and blow it twice," Jansen said. "That will never happen with Kersh, I'm sorry. To see how he had to pay for it, fans, everybody giving him a tough time -- that's what I'm saying. You killed a lot of young careers during the season. Pitchers used to come up and get crushed and get sent down. And then all you gotta say is, 'I'm sorry.' People are not having a job right now because of that, and that's why I'm saying it's worse [than steroids]. At least back then, everybody used to use steroids, so it was a fair game. It was a fair game, you know? I'm sorry, man. I think it's worse than gambling, too."

Jansen was speaking hyperbolically and somewhat tongue-in-cheek while alluding to the widespread use of steroids in the late 1990s and early 2000s. His point was that pitchers could theoretically level out the playing field by using performance-enhancing drugs and that there is no counter when hitters know which pitch is coming.

It's important to remember, however, that very few of the affected pitchers truly know the instances when Astros hitters knew what was coming. Only the Astros players themselves know, and they will probably keep that information to themselves. Pitchers such as Jansen will have strong suspicions, but they might also be susceptible to confirmation bias. It's why Kershaw has struggled with processing all this.

"It would be awesome if you could know every pitch they knew something that was coming, which pitch and all that stuff," Kershaw said on Friday. "But you know what? It's not gonna happen. I'm OK with it. I've made peace with it. I've moved on, personally."

Jansen hasn't really been the same since the 2017 World Series. He finished that season fifth in National League Cy Young Award voting but hasn't been anywhere near as reliable since, blowing a combined 12 saves over the next two seasons.

Jansen, 32, spent some time at the esteemed Driveline Baseball facility in Kent, Washington, over the offseason to get his stride and his delivery back to normal. He's starting to notice more life on his cutter because of it. But few could rationally expect Jansen to return to the level he displayed in 2017. Finishing that season with a World Series title could have changed everything about how the Dodgers, and Jansen in particular, are perceived.

"All that stuff went to my head, but then -- you just pray about it," Jansen said. "Move forward, man. It happened. It happened for a reason. And yeah, a lot of people were tough on us. The fans and everything. I was tough on myself. ... But we have a good chance to win it this year, so I think all of us should spend our energy focused on 2020 instead of 'what if' in '17. You can't do anything about it."
Report a correction or typo
Related topics:
sportsespnnewsmlbhouston astroslos angeles dodgerskenley jansen
Copyright © 2022 ESPN Internet Ventures. All rights reserved.
TOP STORIES
Man accused of fatally stabbing UCLA grad student arrested
Biden, 1 year in, says nation weary from COVID but in a better place
Family seeks justice for teen found dead along freeway in South LA
Starbucks no longer requiring US workers to be vaccinated
Cardi B offers to pay for funerals of all 17 Bronx fire victims
French actor Gaspard Ulliel dies after ski accident
Vice President Kamala Harris to visit San Bernardino on Friday
Show More
'Weird Al' biopic to star Daniel Radcliffe in title role
Man sentenced to life in prison for violent crime spree in LA County
Felony charges are 1st in a fatal crash involving Autopilot
COVID test sites open in Hawthorne, San Gabriel Valley to meet demand
Northern California teen nails perfect SAT score
More TOP STORIES News