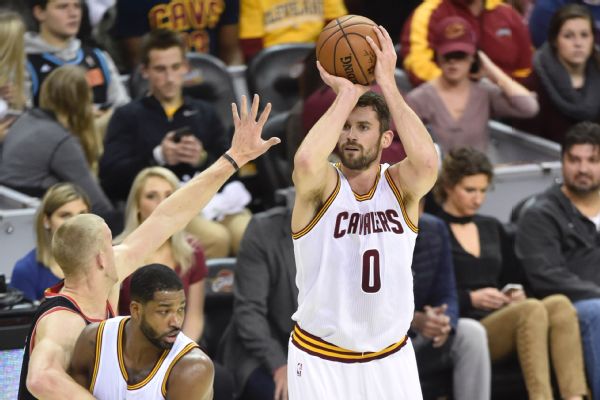 Love fell three points shy of the league record for points in any quarter, set by Golden State WarriorsguardKlay Thompson, who scored 37 in the third on Jan. 23, 2015.

"I'm not trying to be nonchalant about it, but sometimes when you're in it, you don't necessarily feel it," said Love, who finished with 40 points in Cleveland's 137-125 win. "It was nothing out of the ordinary, as far as our play-calling and flow of the game."

Love grew up near Thompson in Lake Oswego, Oregon, but didn't realize how close he came to eclipsing his childhood friend's record.

Love, who established a Cleveland team record for points in any period, made 11 of 14 field goal attempts, including a career-high eight 3-pointers on 10 attempts in the period. He outscored the Trail Blazers 34-31 during the Cavs' 46-point first quarter.

"He beat them by himself," Love's teammateJ.R. Smithtold Fox Sports Ohio at halftime."To hit shots like that in the first quarter -- never seen it."

Love missed his only shot in a scoreless second quarter, scored six points in the third and went scoreless again in the fourth. He made 12 of 20 shots in all, including 8 of 12 3-pointers, and recorded his first 40-point game since April 14, 2014, with theMinnesota Timberwolves.

The Cavs'LeBron James previously held the franchise record for points scored in any quarter with 24, which he did three times. James' career high is 25 in a quarter.

"It's great," said James. "I mean, I've always loved seeing my teammates catch one of those moments right there and just try to keep him in that zone as much as possible. I went over and told him just whatever you're doing, wherever you're at right now, just stay right there. Stay even keel. Whatever you're thinking about right there, just stay there, because we're going to keep coming to you."

In the first quarter alone on Wednesday, Love matched the most points he has scored in a game since joining Cleveland; he poured in 34 against the Orlando Magic exactly one year ago.

"Every game that we start out, the first play of the game's for Kevin," said Cavs coach Tyronn Lue. "You know, he made the little step-back jump shot, and then he made his first couple 3s and then we just started looking for him."

"In order to aid him, we just tried to get him open; [he] got himself open and [he] made incredible, aggressive moves," Irving said. "When Kev is like that, that type of night can happen any night for him."

Love's career high for a game is 51 points, which came while playing for theTimberwolves on March 23, 2012. Love's previous high this season was 27 points.

"Obviously, we had a huge hot hand," James added. "We had a guy that was lightning."