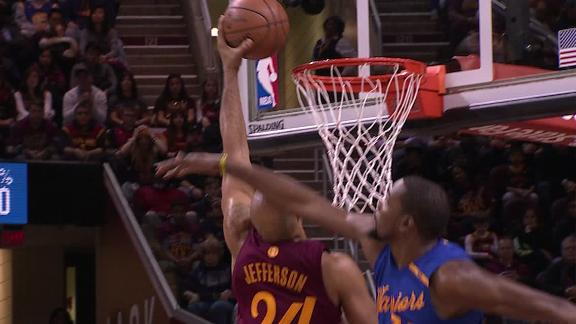 CLEVELAND --Cavaliersveteran swingman Richard Jefferson was assessed a technical foul for taunting after he smiled and winked -- yes, winked -- at theGolden State Warriors' Kevin Durant in the fourth quarter of Cleveland's 109-108 come-from-behind victory on Christmas Day.

"I was a little bit surprised by it, but I think they were trying to rein it in," said Jefferson, whose dunk on Durant started the Cavs' comeback from down 14 points. "The only thing I said to [referee] Sean [Corbin] was, given everything going on out here, a little look and smile and wink [is innocent]. There's no screaming, there's no yelling, there's no fist pumping, there's no nothing. Just a smile and a wink to another competitor. And KD wasn't even offended. It's not like KD said something back to me or felt like it was like, 'Hey! Hey!' There was nothing. But again, I respect the referees and the job they have to do."

LeBron James said he believed the tech would be rescinded by the league, while Cavs coach Tyronn Lue was OK if the penalty stands.

It was Jefferson's third technical foul in his past three games after he was ejected against the Milwaukee Bucks last week and threw his jersey into the stands as he made his way to the locker room.

"I know I've had a little bit of an interesting week or two with the referees," Jefferson said with a smile.

Cavs guard Kyrie Irving vowed to help chip in to pay for the $2,000 fine from the league should the T hold up.

"Kyrie has been paying so much money for me, I don't know," said Jefferson. "He's been paying all these fines. I'm going to see what I can do to try and get it negated. But that's why you have good teammates."

After starting the game 0-for-6 from the field, Jefferson finished with six of his eight points coming in the fourth quarter. He also was guarding Durant on the Warriors' final possession, when the Golden State star claimed he was fouled on his errant 34-foot 3-point attempt at the buzzer.

Jefferson said Durant did indeed fall on his own and not because of any push from him.

"We all think we're fouled on every play in every single game," Jefferson said. "That's why I say I know the referees have a very hard job. I switched to his body. It looked like he lost his balance. He was trying to regain his balance, and as soon as I saw him start to stumble, I ran off. I ran off so it wouldn't look like I was trying to pressure him more, so he didn't trip on my foot and it looked like I bumped him -- nothing.