Lakers' Brook Lopez has ankle sprain, to be evaluated in 3 weeks 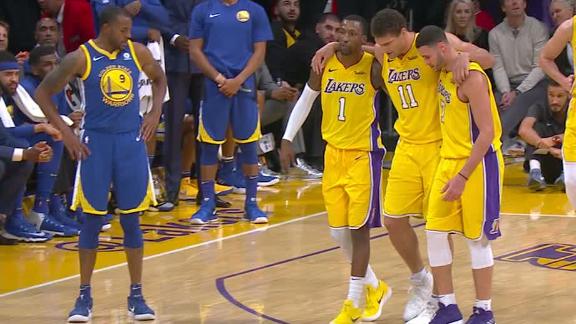 LOS ANGELES -- X-rays were negative and an MRI confirmed that Los Angeles Lakers center Brook Lopez has a right ankle sprain, the team announced Tuesday. He will be evaluated in three weeks.

He rolled his ankle trying to challenge a shot from behind in the first half of the Lakers' 116-114 overtime loss to the Golden State Warriors.

"Brook means a lot," Lakers point guard Lonzo Ball said. "Anybody that big with that skill set ... offensively and defensively he is big in the paint and he can space the offense so we are definitely going to miss him and we will try our best without him."

He added: "We are not going to be able to replace Brook but everybody has to step up."

Head coach Luke Walton would not reveal who he will start in place of Lopez, but with the Lakers facing the Rockets and Golden State in the next two games, Walton could go with a smaller lineup and move Kyle Kuzma into the starting lineup with Larry Nance Jr. moving to center. Walton may want to keep Julius Randle with his second unit. Randle has been valuable as the team's backup center and has often finished games for the Lakers.

Walton may also start rookie Josh Hart again in place of Kentavious Caldwell-Pope, who will miss Wednesday's game against Houston due to a legal court restriction that does not allow him to leave the state of California for 25 days. Hart had 11 points and 10 rebounds against Cleveland in his first start last week.

Lopez has required surgery on his right foot before. In 2014, while with the Brooklyn Nets, he underwent surgery to repair a fractured fifth metatarsal of his right foot.

Lopez also had a second procedure, a first metatarsal osteotomy, that repositioned another bone in his foot to "unload and protect the injured area."

In 2011, Lopez fractured the same fifth metatarsal, which required a screw to be replaced in it.

Lopez went into Monday night averaging 13 points and 4.4 rebounds in 22.9 minutes per game this season.