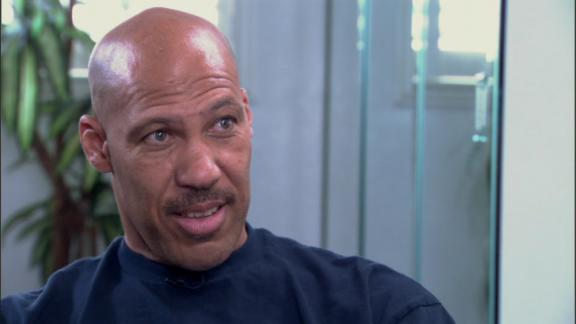 CHINO HILLS, Calif. -- LaVar Ball, in a wide-ranging interview at his home on Thursday, told ESPN that his wife has returned to the house more than three months after suffering a stroke; his two younger sons will only be in college for one season apiece; he won't change even after his oldest son, Lonzo, gets drafted; and Michael Jordan would only score two points against him.

Ball's wife, Tina, suffered a stroke in late February and recently returned home, where he said he is caring for her as she recovers. Ball said she has progressed but will not be able to attend the NBA draft on June 22.

"I just deal with it. Whatever it is," Ball said. "Things are gonna happen in life. Either you are gonna help do something about it or you just gonna let it happen and destroy you.

"She wants to talk, and she can get out a few words," he continued. "I'm rebooting her right now. She's saying, 'LaVar, you're right. You are right.' That's all I want to hear her say. Now we can get another 25 years having a good time. She is going to get better with me."

Ball also went into the approach he took with his sons, fostering a relationship with their mother when they were younger.

"I told them, 'If you're going to be disrespectful to your mom, I want you to be all the time.' So, excuse my language right here, but if you want to say, 'Good morning, b----,' that's fine with me," Ball said. "I'm not going to say nothing. If you want to call your mom a b----, that's fine. But don't get sick, when your stomach is hurting and you want me to care for you because you know I ain't. ... She'll clean up the throw-up, the s---, whatever. She'll take care of what you want. ... So don't wait until you need something, or you need her to make you something, and now you want to be nice to her. ...

"So they never disrespect their mom or talk back to her or say nothing. Because I say, 'In the long run, you're going to need her before you need me.'"

Also during the interview, Ball talked about different types of discipline he used on his sons, including giving Lonzo "a couple of hits upside the head" after he missed curfew and was pulled over by police in high school, and using a "belt or something" to discipline LaMelo.

Ball later clarified remarks he made during the interview, saying that he has spanked each son once in their lives -- and that has instilled a sense of fear so that he hasn't needed to do it again.

"I spanked them once," Ball said, "to let them know there are repercussions at times. But my boys are respectful, and usually my voice is enough."

On the future of his two younger sons, LiAngelo and LaMelo, the elder Ball said each will only spend one season in college, and he will do whatever he can to reunite them with Lonzo in the NBA.

"No matter what," LaVar said.

The Boston Celtics have the first overall pick in this year's draft. Lonzo has worked out for and met with officials from his hometown Los Angeles Lakers, who will pick second.

LiAngelo will be a freshman this season atUCLA, and although LaVar Ball said he expects his middle son to average 25 points per game, he wasn't heralded coming out of high school despite averaging more than 30 points per game this past season.

Multiple NBA executives said the 6-foot-5 LiAngelo, whose strength is shooting the ball, isn't even on their draft boards.

"All my boys are gonna be one-and-done. Gelo [LiAngelo] is going [to] be one-and-done whether he's good or bad," LaVar said. "I'm going to put him in the draft, hope they don't take him. Bring him into the Lakersas a free agent, let him wind up with his brother and watch how good they play together."

Added Lonzo: "Knowing my brother, I think he'll be ready. Look at his body; he's already [got an] NBA-ready body. I know he can shoot. I know he has the skills. I'm confident."

The youngest son, LaMelo, will be a junior at Chino Hills High. He's a 6-foot-5 guard who is known for his flashy play and ability to shoot the ball from deep.

Other highlights from the interview:

Ball said he doesn't believe he has affected Lonzo's draft stock and won't change even when Lonzo gets to the NBA. "I ain't stepping back to nothing. ... I don't step back. Why would I change?"

Ball said he doesn't regret the comments he made to Fox Sports' Kristine Leahy in an interview last month with Colin Cowherd. Ball told Leahy to "stay in your lane" in response to a question, and he called her a "hater."

Ball maintains Jordan would only score two points if they played one-on-one, saying the score would be "13-2, he got two -- and only reason I give him two is cause he's Jordan. He's too little, too little to guard me."