Lawrence Frank: DeAndre Jordan was 'never, ever dangled out there' 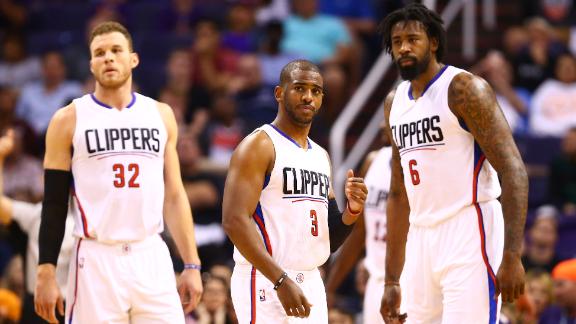 "DeAndre was never, ever dangled out there," Frank said.

League sources previously told ESPN's Chris Haynes that the Clippers have gauged the market on potentially trading Jordan, a nine-year veteran who has twice made the All-Defensive first team and played in his first All-Star game this past season. Sources said the Clippers, in an exploratory fashion, spoke to a few teams about him.

"DeAndre's a cornerstone to what we do, and it's funny, if you track every rumor, literally every single player outside of maybe the guys on Golden State and LeBron were mentioned," Frank said. "So, you know, in the front office what we've learned quickly is you can't dispel everything.

"We love DJ. DJ's gonna be here for a long, long time as far as we're concerned."

Jordan, 28, has two years and $46 million remaining on his contract. The final year is a player option.