Let's overreact to Week 10 in the NFL: Lamar Jackson is the MVP favorite 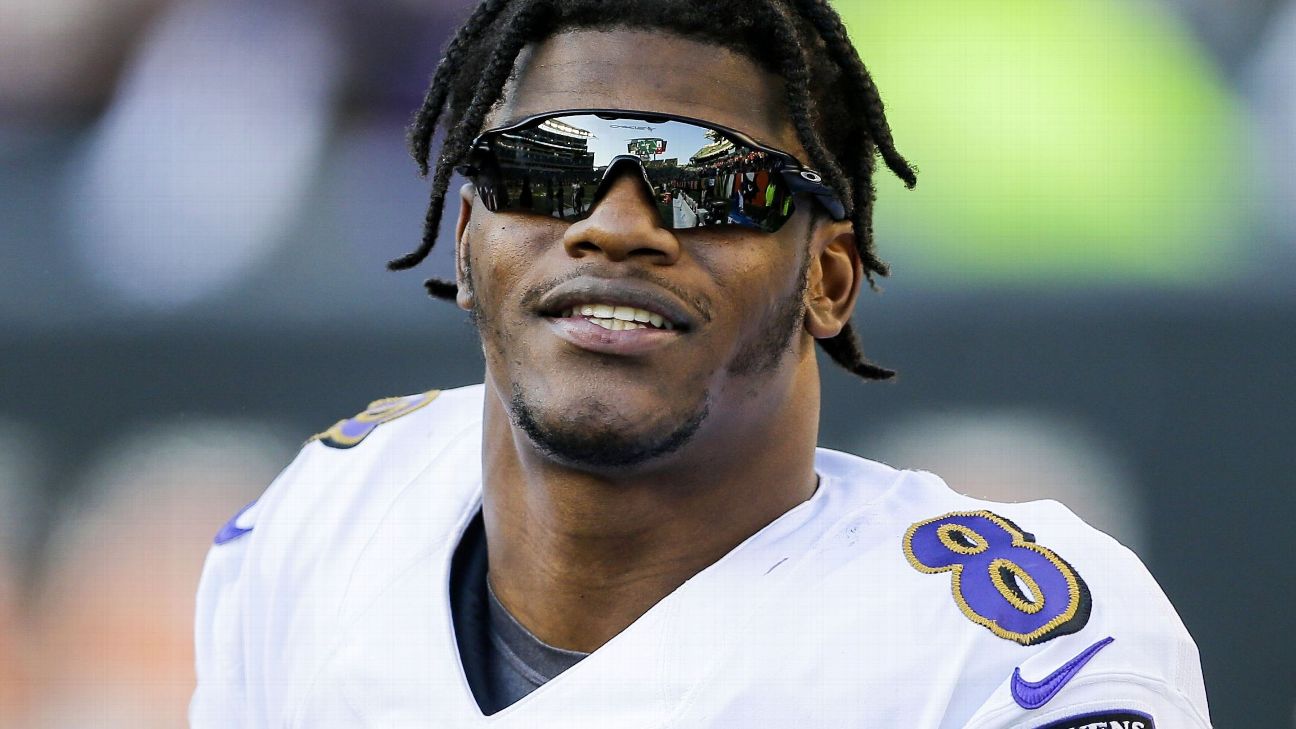 Lamar Jackson, breathtaking second-year quarterback of the 7-2, first-place Baltimore Ravens, is the present. To watch him is to see all that football can be, right here in our current, fortunate moment in history. Jackson is built for Overreaction Monday. So this week, he's where we start.

Lamar Jackson is the MVP of the league

It was the second time this season that Jackson posted a perfect passer rating. His 99.7 Total QBR in Sunday's victory over winless Cincinnati was the highest any quarterback has posted this season -- surpassing his own 99.4 in Week 1 against Miami. Jackson was 15-for-17 (one of the incompletions was an intentional, clock-stopping spike) for 223 yards and three touchdowns, and he added 65 rushing yards and another touchdown on seven carries.

He built a 49-10 lead and then sat out the fourth quarter the way he did when he was at Louisville and the Cardinals were crushing UConn or someone in a noon Saturday game two or three years ago. And if you want to say, "Pfft, it was the Bengals," you'd technically be right, but the kid beat the Patriots last week, so ...

The verdict: NOT AN OVERREACTION. Look, the reigning MVP returned from injury and threw for 446 yards (albeit in a loss) in Tennessee. Russell Wilson is the front-runner and plays Monday night (8:15 ET on ESPN and the ESPN App). Deshaun Watson had the week off. This is a heck of an MVP race, and if you want to make the case for any of those quarterbacks or Christian McCaffrey or a handful of other guys, you're totally justified. It's a race that's just way too early to call.

But when you look at the way Jackson is playing, what he means to his team, the success his team is having with him as its centerpiece ... you just can't have the conversation without him right now. And it's absolutely possible he'll be the guy with the trophy when the season is over.

Mahomes is, of course, the aforementioned reigning MVP who returned from injury Sunday in spectacular fashion until the Chiefs gakked away the game at the end. He looked as if he'd never left, throwing three touchdown passes, running around to get out of trouble, hitting receiverMecole Hardman on a wacky jump-pass for a touchdown when it looked as if he'd be sacked.

But Kansas City couldn't get the points it needed in the final two minutes to ice the game. Titans quarterbackRyan Tannehill went down the field and scored a go-ahead touchdown, and even after Mahomes got the Chiefs back into field goal range for a game-tying attempt, that was blocked. A triumphant return ended in heartbreak.

The verdict: OVERREACTION. I'm with you that the 6-4 Chiefs' defense is their Achilles' heel. It was last year, when they couldn't get a third-down stop against the Patriots in the AFC Championship Game, and it was Sunday, when they couldn't stop Derrick Henry or, amazingly, Tannehill when they needed to.

But this defense played well enough last week to get a big win against the Vikings, and given the injuries it has dealt with, the Chiefs' D has been a little bit better in the big picture than a lot of us thought it would be. All this platoon has to be is middle-of-the-pack for Mahomes to give Kansas City a chance to win any game, and I think that's why the vibe in the Chiefs' locker room postgame was not one of devastation.

Their guy is back, and even though they aren't where they wanted to be in the standings, he makes them feel as if they can beat anyone. As long as the defense isn't a sieve (and for most of Sunday, it was not), the Chiefs will be in the mix at the end.

The Raiders will win the AFC West

The flip side of Kansas City's loss is that Oakland, which won Thursday night, is now a half-game behind the Chiefs in the race for first place in the AFC West. That sounds wild, but we live in interesting times.

Jon Gruden's 5-4 Raiders are the only team in the NFL with a negative point differential and a winning record. No matter what it has looked like to this point, they're right there breathing down the necks of the 6-4 Chiefs. Knock on wood if you're with me!

The verdict: OVERREACTION. You've got to love what Gruden is doing out there in the final season in Oakland. Got to love the way he hasDerek Carr playing, and what they're getting out of rookie Josh Jacobs, and how they're piecing together a passing game with almost nothing at receiver. Got to love all of it. But I can't sit here and believe they're going to finish ahead of Mahomes, Andy Reid & Co.

Kansas City has only two road games left (though one is in Foxborough, Massachusetts), while the Raiders still have to play all three of their divisional road games. The Chiefs beat them 28-10 in Oakland in Week 2, so if they beat them again in Kansas City in three weeks, they would have a hammerlock tiebreaker edge. And again, the Raiders have been outscored by more than a field goal per game on average.

Could Oakland sneak into a wild-card spot in a soft AFC? Absolutely. After Sunday's games, the ESPN Football Power Index gives the Raiders a 38.2% chance to make the playoffs. But my money is on the Chiefs to get it together and hold them off, and I don't think that's my boldest take ever.

The Giants and Jets will both change coaches this offseason

The Nightmare in New Jersey went the way of Gang Green on Sunday, with second-year Jets quarterback Sam Darnold leading a fourth-quarter comeback victory over first-year quarterback Daniel Jones and the Giants. There was plenty of ugly to go around, as you'd expect in a game out of which the two teams emerged a combined 4-15, but one of these teams was going to come out with a much-needed win over a very beatable opponent, and the team that did was the Jets.

Nothing big-picture is fixed, as the vibes around both teams remain terrible and big questions remain about whether the quarterback-guru head coaches in Florham Park and East Rutherford are the right men to shepherd the development of the young quarterbacks in question. The remainder of the football season in the New York market will be a sad slog into an offseason filled with question marks, and the status of each coach will be among those question marks.

The verdict: NOT AN OVERREACTION. I'm not putting any money on this, of course. Adam Gase is in his first year as Jets coach, has his own hand-picked general manager in place and has a chance to finish the season with Darnold on the upswing against a soft schedule. Pat Shurmur is in his second year as Giants coach, it's hard to see a team like the Giants changing coaches for the third time in four years, and the ire of ownership seems more likely to fall on the defense than the offense at this point.

So it's not hard to imagine either or both of these guys keeping their jobs for 2020. But there's a lot of season left, and a lot of time for things to get a lot uglier in both places. It might not be overly likely, but it's far from impossible to imagine twin coaching searches going on with the New York teams come January.

The Rams will miss the playoffs

A loss in Pittsburgh, where the frisky Steelers have revived their own season with four wins in a row, dropped Sean McVay's crew to 5-4. The Rams made the playoffs in each of McVay's first two seasons, and the Super Bowl last season. But as of now, they are tied with the Panthers and Eagles and looking up at the Seahawks and Vikings in a crowded NFC wild-card race.

They beat the Panthers, but they've already lost to the Seahawks and the 49ers, who are the two teams in front of them in the division race. The NFC is tough, and you might need a really good record to get a wild-card spot. ESPN's Football Power Index gives the Rams just a 23.5% chance of making the playoffs as of Monday morning, and they have less than a 1% chance to win their division.

The verdict: NOT AN OVERREACTION. It's just not going to be easy to crack this field this season. The Rams are a third-place team behind two of the league's best teams in their own division. They have road games still on their schedule in Dallas and in San Francisco, home games still to play against the Ravens and Seahawks, and two games against a Cardinals team that gave the 49ers fits and doesn't look like very much fun to play. 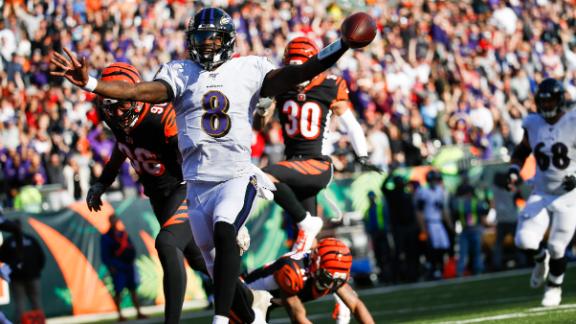 Jackson's 4 TDs lead Ravens over Bengals
Lamar Jackson throws three touchdown passes and runs in another score as the Ravens take down the Bengals. 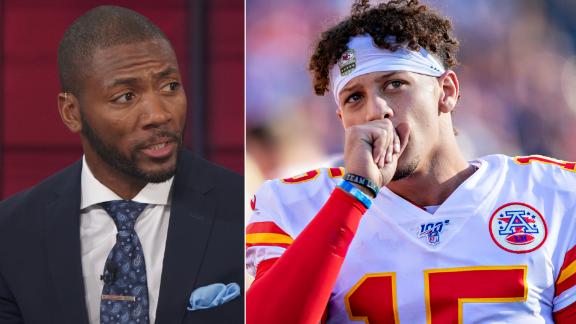 Clark: Chiefs' defense is failing Mahomes
Ryan Clark analyzes the real issue behind the Chiefs' loss to the Titans and how this isn't the first time the other side of the ball couldn't save Patrick Mahomes. 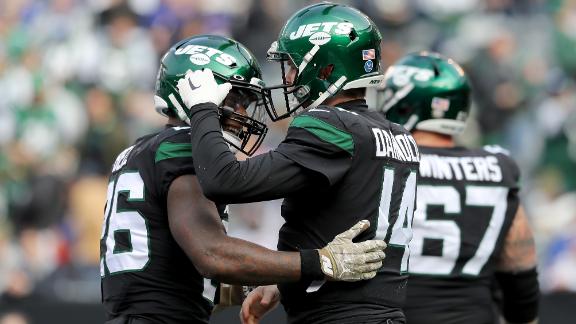