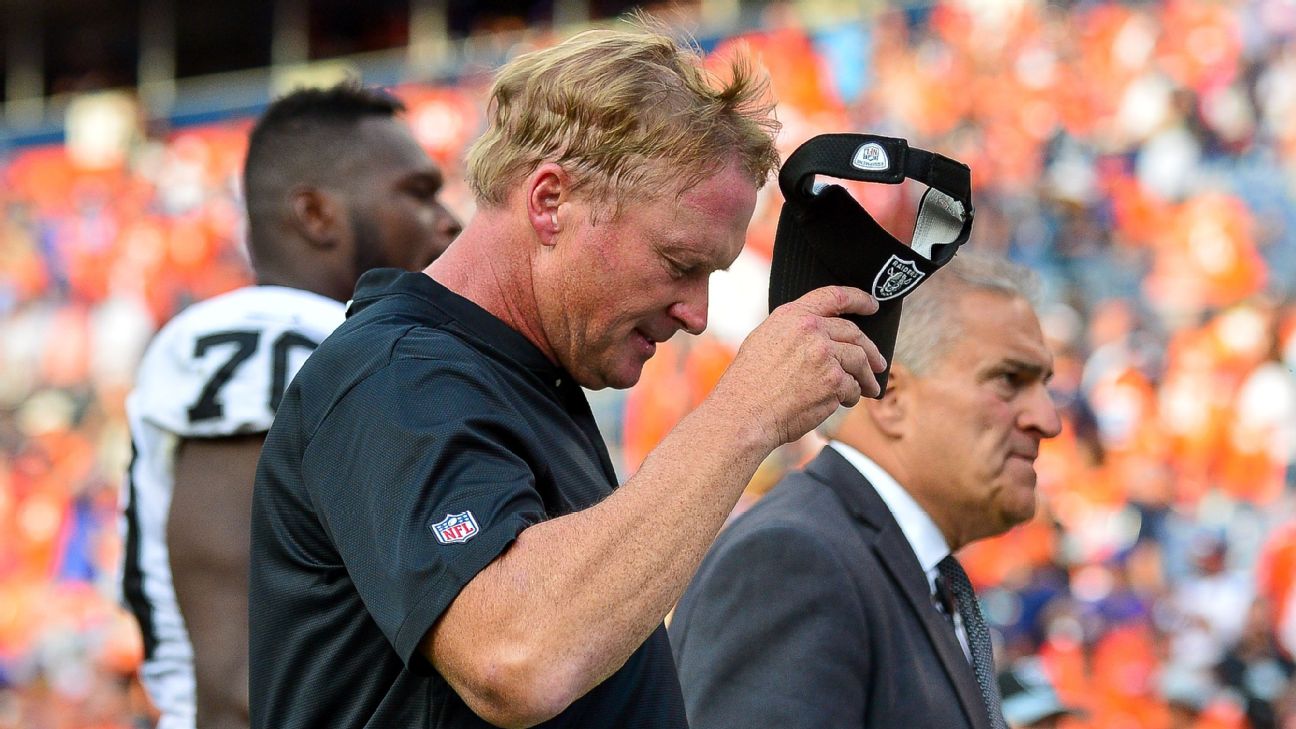 ALAMEDA, Calif. -- A day after Oakland Raiders owner Mark Davis gave Jon Gruden a vote of confidence, calling Gruden's hiring as coach the "endgame" for him, Gruden reciprocated the feeling.

"I feel Mark's pain," Gruden said Monday in his weekly media conference, after the Raiders' 20-6 loss to the Los Angeles Chargers dropped Oakland's record to 1-8 in Gruden's first season back on the sideline following nine seasons in ESPN's Monday Night Football booth.

Making things tougher for Gruden to win is the injury bug. Again.

Receivers Martavis Bryant and Jordy Nelson both suffered knee injuries against the Chargers, with Bryant suffering an injury to his posterior cruciate ligament that might keep him out "for some time," Gruden said, while Nelson's knee is being further evaluated. It was described as a quadriceps injury Sunday.

"We'll knock on Marcell Ateman's door," Gruden said of the seventh-round rookie receiver. "Perhaps get him an opportunity to step forward. We'll bring in some receivers to work out tomorrow and if we need to make a roster spot, we will."

Gruden praised the play of veteran Brandon LaFell, who caught four passes for 47 yards Sunday, and Seth Roberts, who had three catches for 39 yards.

"Hopefully Jordy's OK," Gruden said. "If not, Marcell will get a great opportunity against Arizona."

Plus, the Raiders are placing defensive tackle Eddie Vanderdoes on season-ending injured reserve rather than activating him after he suffered a torn ACL in the 2017 season finale. Vanderdoes began the season on the physically unable to perform list and had endured setbacks in training camp and recently.

"We're going to be very precautionary with him," Gruden said. "I think it's the right thing to do for him and his future."

Gruden was asked what positive signs he saw in the wake of the 1-8 start, which includes the Raiders being outscored by a combined 75-9 the past nine quarters.

"I thought we hung in there pretty good [with] a lot of young guys playing," Gruden said. "I know we can play better and I know we will play better. I'm not going to make any predictions. I know it's dark right now. It's tough. It's tough on our fans. I thank our fans for showing up and being with us. But we're going to bring this thing back. I've been a part of it before and we've got some great people to build around and we've got some resources to keep building. I'll leave it at that."

Davis, who spoke to ESPN during a dinner at an Oakland waterfront restaurant Sunday night in which he played host to former Raiders Jim Otto, Art Shell, Clem Daniels, Art Thoms and the late Ken Stabler's life partner, Kim Bush, and daughter Kendra Stabler Moyes, also said Gruden had a 10-year contract for a reason.

"Jon's going to be the stability here," Davis said. "Jon's going nowhere. That's just the way it is."

Gruden found solace in that.

"The Oakland Raiders, we've had a lot of change in this organization for the last 15, 20 years, and change is tough," said Gruden, referencing the nine coaches Oakland has employed -- Bill Callahan, Norv Turner, Shell, Lane Kiffin, Tom Cable, Hue Jackson, Dennis Allen, Tony Sparano and Jack Del Rio -- since Gruden was traded to the Tampa Bay Buccaneers in 2002.

"Change is tough on everybody. I'll put a big exclamation point on that. I thought there were some really good signs yesterday, some signs that really excited me, and I'm really happy to be back and I know we've got a lot to prove and I'm sure we have our critics out there, but that's all part of this."