Lonzo Ball on brother LiAngelo's arrest: 'I got to come out here and play' 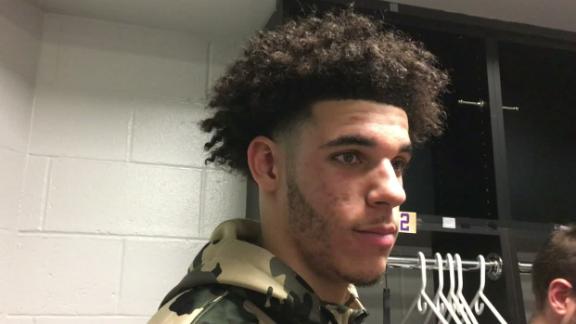 BOSTON -- Booed from the moment he touched the ball to the end of his first NBA game in Boston, Lonzo Ballsaid that he mentally struggled through another tough shooting night on Wednesday, while his brotherLiAngelo Ball remains in China following his release on bailafter his recent arrest on shoplifting charges.

After the Celtics remained the league's hottest team with a 107-96 victory over the Los Angeles Lakers for their 10th consecutive win, Ball said he has yet to talk to LiAngelo or his family. Both of his parents and his youngest brother, LaMelo, are in China, where LiAngelo's UCLA squad is preparing for Friday's matchup with Georgia Tech.

On Thursday, LaVar Ball and LaMelo Ball, who arrived in Shanghai on Tuesday night, visited LiAngelo Ball at the luxury hotel in Hangzhou, where he remains confined with two other UCLA freshmen. They returned to Shanghai after their visit.

Asked whether he was able to block out the situation in China, Ball said, "I mean, it's still my little brother. But I got to come out here and play."

Ball shot just 4-for-15, including 1-of-5 from 3-point range, against the Celtics, but he finished with 9 points, 6 assists, 5 rebounds and a career-high 4 blocks, including one rejection that came after he chased Kyrie Irving from behind from end to end.

Before the game, Ball said he knew his family is "all over there in China taking care of it, soI will talk to them when they get back." Hetried to maintain that the situation would not be a distraction.

Lakers coach Luke Walton said that he talked to Ball before the game and the rookie said and looked like he would be fine.

Then Ball played his first game in the most storied rivalry in the NBA. From the tip, Boston fans booed the Lakers point guard, who chose not to work out for the Celtics when they had the top overall pick in this year's NBA draft. Boston then traded the first pick to thePhiladelphia 76ers, acquired the third pick and took Jayson Tatum. The Sixers took Markelle Fultz, and Ball went to the Lakers with the second overall pick.

While Tatum -- who played just nine minutes on Wednesday because of ankle soreness and finished with five points -- has impressed early this season, Ball has struggled with his shot. The Lakers point guard has shot just 39-for-132 (29.5 percent) and 12-for-52 (23.1 percent) from 3-point range thus far this season.

According to NBA tracking service Second Spectrum, Ball is shooting 34.4 percent in the paint this season, worst in the NBA. He's shooting 25 percent from outside the paint. The rookie has tried to be aggressive with his offense, as the Lakers want him to push the tempo and keep defenses honest.

Ball said he and the Lakers' coaches have been working on his balance when shooting, but his missed shots are taking a mental toll.

"It's just in my head, to be honest," Ball said. "I know I can [shoot]. ... It's a long season. Just got to stay positive and keep putting in work. And then it is going to show for itself.

"Obviously, right now, I am making no shots, but [just got to] keep shooting."

Irving -- who missed all seven of his 3-point attempts but finished with 19 points, 6 rebounds and 5 assists -- came away impressed by aspects of Ball's game.

"He's 6-[foot]-6, unbelievable in transition," Irving said. "Understanding that he wants to get his teammates involved. Can you really put a position on him, particularly right now? ... He does a great job of running that team. When he started to get comfortable and the pace started to pick up, that's where he starts to flourish.

"Defensively, he's going to be challenged every single night. So those are signs that you can see he wants to go out there and compete. That's something that you want to see out of a highly touted rookie such as Lonzo is that just to go out there and play with the best of them."

Boston's Marcus Morris said "everybody knows" Ball is a "good kid, just his dad has a big mouth," and that is not a bad thing.

"He's just a supporting father, man," Irving said of LaVar Ball. "Some guys are in the front line speaking for their kids. Some parents are on the back line. It's just like the loud parent at the graduation clapping unbelievably loud. You know, we all have different styles of parents. I think everybody just needs to appreciate their own."

Ball said he heard the boos from the start of the contest in Boston, but he also hears them every time he plays away from Los Angeles.

"He is a great player," Ball said of Irving. "I said it before the game: one of the best players in the league. Tough challenge having to stay in front of him."

On Thursday, Ball and the Lakers will faceJohn Wall and the Washington Wizardsfor the second time this season.