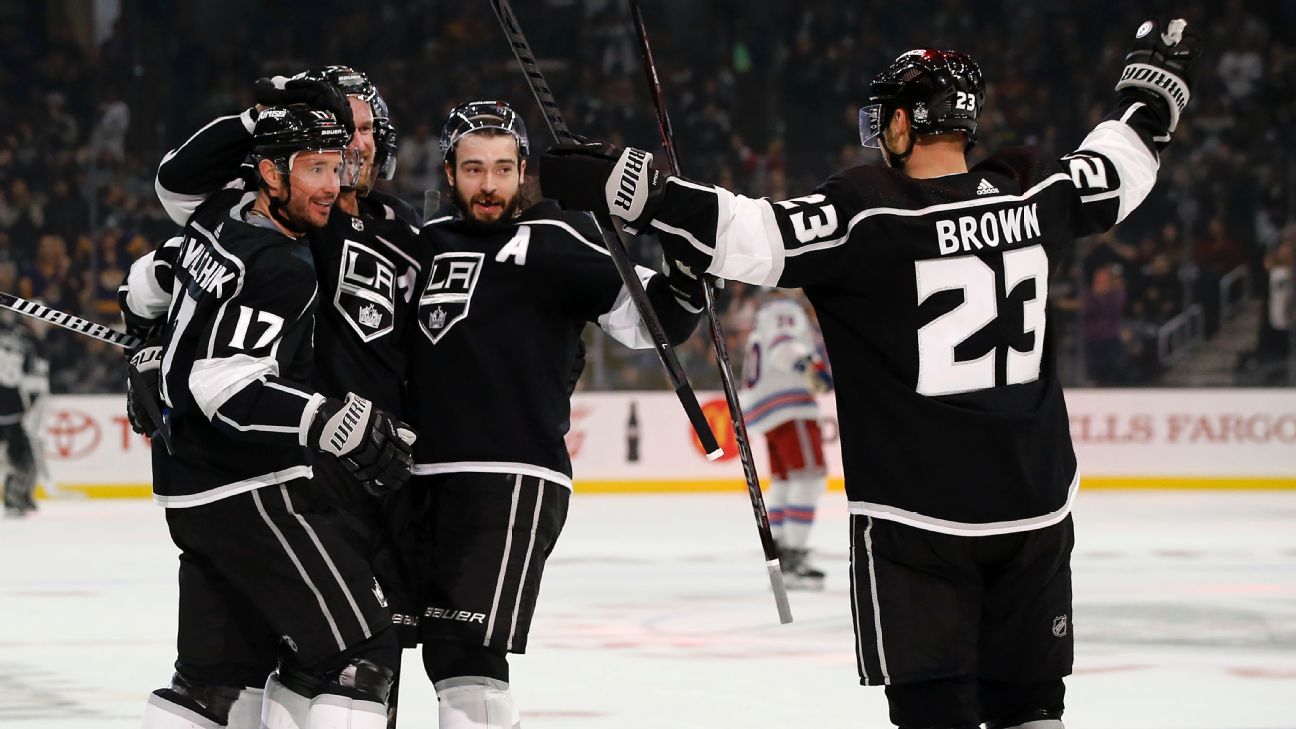 There's a long road ahead of the Los Angeles Kings as they seek Stanley Cup contender status again. But things should go better this season than last. Here's everything you need to know about the the Kings heading into the 2019-20 NHL season:

The big question: How long is this going to take?

The Kings are caught in that purgatory between their years as a veteran championship contending team and having their next generation of players ready for the NHL. The names you know: Forwards Anze Kopitar (32), Ilya Kovalchuk (36), Dustin Brown (34), Jeff Carter (34), defenseman Drew Doughty (29) and goalie Jonathan Quick (33). The names you'll know in a couple of years: Forwards Alex Turcotte (18), Rasmus Kupari (19) and Arthur Kaliyev (18), and defenseman Tobias Bjornfot (18).

It's a team in transition. But having a few players reverse their substandard performances from last season could mean the Kings are a bit more respectable under new coach Todd McLellan.

McLellan arrived after the Oilers fired him last season, replacing interim coach Willie Desjardins (who took over for a fired John Stevens). But that's essentially the biggest move of the offseason for the Kings, who otherwise re-signed their own players and made small additions like defenseman Ben Hutton as an unrestricted free agent.

GM Rob Blake's logic: Keep the players the Kings have under contract, unless blown away by a trade offer, because he'd then just have to find other veteran stopgaps before the prospects are ready. The Kings have $5.2 million in cap space this season, and have 12 players under contract for next season.

Kopitar becomes a candidate for comeback player of the year, increasing his point total by 15-plus points.

The 21-year-old center, a St. Cloud State product, played his way onto the Kings in the preseason. He's only 5-foot-7, but in the modern NHL, you can get away with that. He projects for the Kings' bottom six, and can pass the puck well.

Experience. Yes, this is a polite way of saying the Kings have some miles on them. But there are seven players from the Kings' 2014 Stanley Cup winner still on this roster, including a Norris Trophy-caliber defenseman. And after getting challenged by their new coach for basically quitting on last season, one imagines they're coming back with something to prove and pride on the line.

Roster construction. It's a young, fast league, and the Kings are ... not that team. McLellan has tried to increase the speed and tempo with which they play, but there's only so much you can do with a team that's got too much 2014 hardware to be compatible with a 2019 software update.

For what it's worth, the players themselves are said to be excited about working with new head coach Todd McLellan, after the team ranked 30th in scoring this past season. That portends somewhat promisingly -- sleeper alert -- for top center Anze Kopitar, and wingers Ilya Kovalchuk and Tyler Toffoli, who all underachieved in 2018-19. NHL newbie Nikolay Prokhorkin is one to watch, particularly if the ex-KHLer works his way into the Kings' top six.

If believing in the Kings' overall potential to benefit from their new coach's tutelage, Drew Doughty threatens to enjoy a bounce-back season as well. Los Angeles' top defenseman is a proven thoroughbred, averaging more than 27 minutes per game, while missing a mere four regular-season contests since 2012-13. Again, great fantasy sleeper potential here with Doughty if L.A. is able to improve their plodding power play.