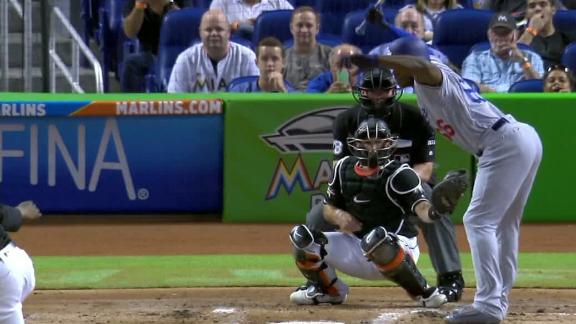 MIAMI -- Dodgers manager Dave Roberts said outfielderYasiel Puig was wrong to take several steps toward the mound after he was nearly hit by a pitch Saturday night against theMiami Marlins, who said they didn't appreciate Puig's reaction.

The first pitch to Puig in the second inning by Miami's Jose Urena was a 96 mph fastball that just missed Puig's left thigh. Puig shouted at Urena and took several steps as some players and both managers ran onto the field.

Catcher J.T. Realmuto stepped in front of Puig, and after some yelling, the confrontation quickly ended. Puig then flied out.

"Yasiel overreacted," Robertssaid. "It's clear to me there was no intent [by Urena]."

"He got like a little baby," Urena said of Puig. "When he was walking [toward] me, that was disrespect. I play the game. I respect the game. If you do something like that, let's go."

It's far from the first time Puig has annoyed opponents with his reactions on the field.

Puig hit two home runs in the Dodgers' win Friday, including the go-ahead three-run homer in the ninth inning. He finished 0-for-2 Saturday in Los Angeles' 7-1 victory.

The benches cleared when the teams met in Los Angeles in May, prompting the ejections of Marlins manager Don Mattingly, Dodgers reliever Ross Stripling and Dodgers bench coach Bob Geren.

In June, Puig received a one-game suspension for flashing both of his middle fingers toward several fans in Cleveland after he homered. He explained that the fans had been heckling him in the on-deck circle and that he "stooped to their level."

Puig appealed the suspension, and it was later rescinded.

Roberts said of Puig's actions at the time, "I made it clear I was not pleased with what he did. He understands how I felt -- and he won't do it again. To have us talking about obscene gestures, I don't want to do that, and he doesn't want to do that."