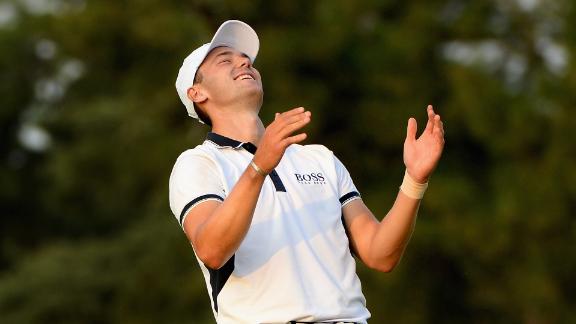 PINEHURST, N.C. -- The U.S. Open trophy Martin Kaymer won Sunday was all he needed to prove he was anything but a one-hit wonder in the majors, and that the two years he spent trying to build a complete game were worth all the doubt that followed him.

As he set it down on the table, Kaymer rubbed off a tiny smudge on the gleaming silver, which was only fitting.

Over four days at Pinehurst No. 2, he dusted the field in a performance that ranks among the best.

Kaymer set the 36-hole scoring record by opening with a pair of 65s. He never let anyone closer than four shots over the final 48 holes. Equipped with a five-shot lead, he was the only player from the last eight groups to break par.

"You want to win majors in your career, but if you can win one more, it means so much more," Kaymer said after closing with a 1-under 69 for an eight-shot victory over Rickie Fowler and two-time heart transplant recipient Erik Compton.

"Some people, especially when I went through that low, called me a one-hit wonder and those things. So it's quite nice proof, even though I don't feel like I need to prove a lot to people. But somehow, it's quite satisfying to have two under your belt."

The 29-year-old German is a forgotten star no more.

Kaymer returned to the elite in golf by turning the toughest test in golf into a runaway at Pinehurst No. 2, becoming only the seventh player to go wire-to-wire in the 114 years of the U.S. Open. Only three players finished the championship under par.

One guy appeared to be playing a different tournament.

Only a late bogey kept Kaymer from joining Tiger Woods and Rory McIlroy as the only players to finish a U.S. Open in double digits under par. He let his putter fall to the ground when his 15-foot par putt on the 18th hole dropped into the center of the cup, like so many others had this week.

His last two wins are the U.S. Open and The Players Championship, with the strongest and deepest field in golf. He never trailed after any round in both of them.

"Martin was playing his own tournament," Fowler said after recovering from a double bogey on the fourth hole to close with a 72.

No one had ever opened 65-65 in the U.S. Open, which broke the 36-hole record that McIlroy set three years ago rain-softened Congressional. When it could have gotten away from Kaymer in the third round, he stayed strong for a stabilizing 72.

"He kind of killed the event in the first two days," Henrik Stenson said. "He went out and shot two 65s and left everyone in the dust."

He did it again in the final round.

Knowing the gallery was against him -- the loud cheers for Fowler, clapping when Kaymer's ball bounded over the back of the second green -- he holed a 10-foot par putt, and then drilled a driver on the 313-yard third hole onto the green to set up a two-putt birdie.

Fowler, in the final group of a major for the first time, fell back quickly on the fourth hole. He sent his third shot from a sandy path over the green and into some pine trees and had to make a 25-foot putt just to escape with double bogey.

"It was probably the toughest day that I played golf today, especially the first nine," Kaymer said. "Because if you have two or three Americans chasing you, playing in America, it's never easy being a foreigner. But I said at the ceremony as well that the fans were very fair. But it was a tough one. If you lead by five shots, it's not easy.

"A lot of people think, Well, you have a little bit of a cushion.' But if you approach that day in that way, with that attitude, it can be gone so quickly."

No chance on this day.

Compton was the only player who really put up a fight. His birdie on No. 8 got him within four shots. Three bogeys in a five-hole stretch on the back nine did him in. Even so, Compton received a standing ovation walking the 18th green. He somehow scratched out a par from 50 yards away against the lip of a bunker.

It wasn't the Hollywood script he wanted, but it wasn't a bad consolation -- his first trip to the Masters next April.

"I've never gotten this far along in my story," Compton said. "I'm thrilled."

Kaymer joined Seve Ballesteros, Ernie Els, Woods and McIlroy as the only players to win two majors and be No. 1 in the world before turning 30 since the world ranking began in 1986. He is the fourth European in the last five years to win the U.S. Open, after Europeans had gone 40 years without this title.

It's a rebirth for Kaymer, who reached No. 1 in the world in February 2011, only to believe that he needed a more rounded game. His preferred shot was a fade. Kaymer spent two hard years and a lot of lonely hours on the range in Germany and his American home in Scottsdale, Arizona.

"I'm wondering how he did it," McIlroy said. "Obviously, if you limit the mistakes, you might end up a couple under for the week. But to do what he's doing ... I think it's nearly more impressive than what I did at Congressional."

Among those who congratulated Kaymer on the 18th green was Sandra Gal, a German player on the LPGA Tour. The U.S. Women's Open takes over Pinehurst No. 2 on Monday.

Kaymer On Tough Final Round
Martin Kaymer discusses the challenges he faced during the final round of the U.S. Open en route to winning his second career major.