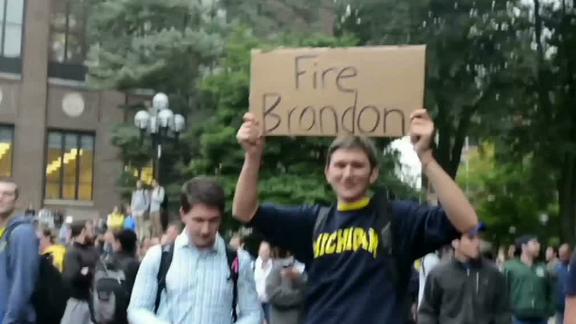 Dave Brandon told the Michigan Daily student newspaper he has not considered resigning from his post as Michigan's athletic director or firing football coach Brady Hoke despite mounting pressure from students and alumni for their removal.

Brandon's interview with the newspaper was the first time he has fielded questions since acknowledging missteps by the athletic department while handling a head injury to quarterback Shane Morris during Saturday's 30-14 loss to Minnesota.

The only previous comments by Brandon about what he deemed a "serious lack of communication" came via a written statement released shortly before 1 a.m. local time Tuesday. The statement, which said Morris had a probable concussion, contradicted Hoke's comments made 12 hours earlier. Hoke said Monday he didn't think Morris had a concussion and deferred to Brandon's statement when asked to clarify on Wednesday. Brandon told The Daily he did not know when or from whom Hoke eventually learned that his starting quarterback had a concussion.

"That was just another example of the failure of communication that took place among the doctors, all of the trainers -- in this case, the head coach -- to try to piece together what happened," Brandon told The Daily.

The first communication breakdown allowed Morris to return to the field in the fourth quarter of Saturday's game after displaying concussion symptoms. Morris needed the help of his teammates to stay on his feet after being knocked to the ground by a helmet-to-helmet hit. He remained in the game for one play before being pulled to the sideline by the training staff. Later in the same drive, Morris returned to the field for one more play after quarterback Devin Gardner lost his helmet.

Brandon said he investigated the sideline breakdown between coaches and the training staff Sunday but did not speak with Hoke. The coach said Wednesday that he has a strong relationship with his boss.

The incident, coupled with a 2-3 record on the field and some of Brandon's previous changes to the program, caused frustration to boil over in Ann Arbor this week. Hundreds of students and fans marched to the president's house on Michigan's campus Tuesday night to ask that Brandon be fired.

"That's very hurtful," Brandon said. "Anybody who thinks that they want groups to gather with the topic being criticism and sometimes very personal attacks on the work and the job ... it's hurtful. It's hurtful to me, it's hurtful to my family."

Brandon said he thought he had an "outstanding" relationship with students but would attempt to do a better job of connecting with them moving forward. He scheduled interviews with local television stations Thursday evening. The university did not respond to multiple interview requests from ESPN.com.

Michigan Students, Fans Protest Against AD
Joe Schad discusses the latest news from the University of Michigan, where students and fans demanded the school get rid of athletic director Dave Brandon.