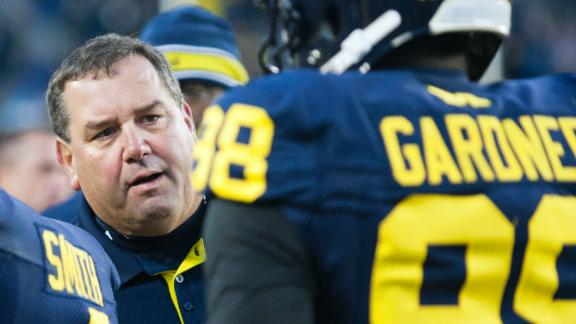 ANN ARBOR, Mich. -- University of Michiganpresident Mark Schlissel issued a public apology to football coach Brady Hoke on Wednesday for comments he made about the academic shortcomings of Hoke's team and others in the athletic department.

Earlier in the week, Schlissel said the university had a habit of admitting football players who weren't qualified to succeed in the classroom, according to an article in the student newspaper.

Speaking to a group of university employees, he said that graduation rates for the football program had been "terrible" until recent years. Schlissel said he was taking his time while searching for a new athletic director this month because he wanted to ensure he would find a candidate who shares his stance on academic integrity. He went on to call the search a "time sink."

Schlissel apologized to Hoke personally Tuesday and said via an interview on the university's website that he planned to speak with the team soon.

"I talked with coach Brady Hoke today to apologize for not providing this full picture in my earlier remarks, and I asked him to convey that to his team. And I plan to do the same, in person, when I return from out-of-town commitments," Schlissel said. "I have a great deal of respect for the efforts of our student-athletes and for the coaches and others in athletics who support them, and that did not come through in my earlier comments. I regret that."

Hoke told reporters Tuesday that during his four years as coach, all 69 seniors have graduated.The team's current academic progress rate is 975, the highest it has been in school history.

"We embrace the expectations that we have here from an academic to an athletic standpoint," Hoke said. "The things that are special about Michigan is that it is an academic institution that has the balance when you look at the competitive side of all sports."

Schlissel took office in July after serving as provost at Brown University. He conceded then that he was new to the world of major-college athletics.

Last month, Schlissel accepted the resignation of athletic director Dave Brandon following a maelstrom of public relations issues surrounding the football team and Brandon. When announcing Brandon's resignation, Schlissel said he has come to understand the importance of athletic success and the football program at Michigan.