Mickelson sits after asking to play 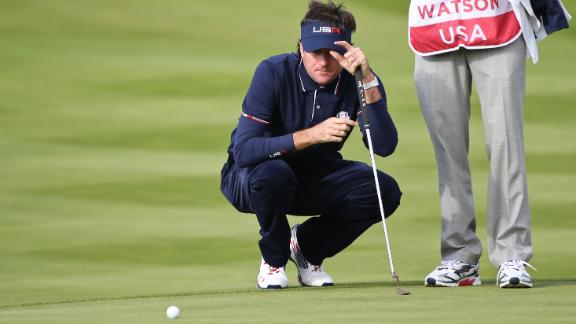 GLENEAGLES, Scotland -- For the first time in 10 Ryder Cup appearances, Phil Mickelson did not play during a full day of competition.

And he very much wanted to be part of the action Saturday at Gleneagles, even texting U.S. captain Tom Watson at one point asking him to reconsider.

Mickelson, a Hall of Famer with five major championships, did not participate in either the morning four-ball competition or afternoon foursomes as the U.S. fell behind Europe 10-6.

"I expected exactly what Phil said to me,'' Watson said after the U.S. dropped 3 of 4 points in the afternoon foursomes, or alternate shot, competition. "He said, 'We can get it done, captain. We want the chance.' I said, 'Well, the way this golf course sets up, the four teams I put out there gives us the best chance.'

"He lobbied again. He texted me, he said, 'Give us a chance.' I had to tell him no. I felt that we had the four best teams possible in the afternoon for alternate shot.''

Mickelson, 44, has made every U.S. Ryder Cup team dating to 1995 but is tied for the most losses in U.S. history with 19. Jim Furyk tied him with a Saturday afternoon loss. Furyk, also 44, played 36 holes on Saturday.

Both players have been on just two victorious U.S. teams during that period, the last in 2008. The U.S. has lost seven of the past nine Ryder Cups.

Earlier, Mickelson declined to answer questions from the media. He said during the afternoon competition while watching on the course that he simply wanted the U.S. to win the Ryder Cup. He would not answer a question about whether he wanted to play.

"I played him two rounds yesterday and he was tired last night,'' Watson said. "I sat at the table with him. He was exhausted. And maybe that was the wrong choice for me playing him two rounds. But he wanted to play in the alternate shot (Friday), and I had to give him his due.''

While Mickelson sat on Saturday, his teammates won just three of eight points.

A 10-6 deficit is the largest ever overcome by either side, the last time by Europe two years ago at Medinah. The U.S. did it in 1999.