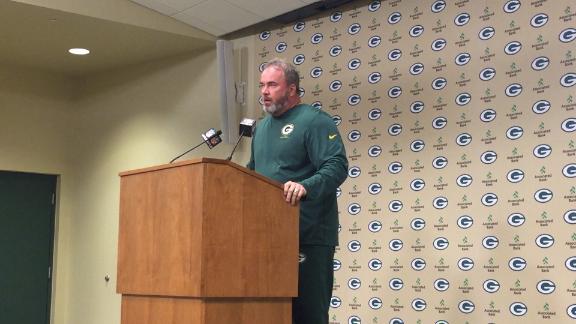 GREEN BAY, Wis. -- Mike McCarthy is taking the mandatory out of minicamp.

The Green Bay Packers coach said Tuesday that he has excused quarterback Aaron Rodgers and more than a dozen other veteran players from this week's minicamp, which is the final part of the offseason program.

The players, which McCarthy calls his "veteran select" group, were set free after they took their physicals on Monday.

"They were excited," McCarthy said before Tuesday's practice. "It was kind of a funny meeting when I called them all in the room and Randall Cobb walked in andJordy [Nelson]just started chuckling. I said, 'Tell me about it.' [Twenty-five]-year-old Randall Cobb's now part of the vet select group. Makes youfeel old."

Given that Cobb was included, the excused players likely included anyone going into his sixth NFL season or more.

The Packers will have less time off this summer than usual because they're playing in the Hall of Fame game this preseason. With five preseason games, they are expected to open training camp on July 24. Last year they started on July 30.

"There's a lot of thought that goes into training the football team," McCarthy said. "Frankly, the Hall of Fame game is a big part of this decision. We have an extra week of work. So really if you look at the veterans' workload as far as the nine-week offseason program, training camp and everything leading up to the beginning of this season, they're excused from three practices today, but they'll have four or five practices that first week. So they'll actually still have the same amount of work or a little more than they would in a normal training camp.

"So that's the starting point. And then with that, playing an extra preseason game our young players are going to play a lot more. This gives us another four or five practices to get those young players ready to play in that game. That's really the baseline of the decision, and I thought it definitely was a win-win for everybody."

It's not as dramatic a departure from the norm as it might seem. Last year, Rodgers and selected veterans with six or more years of experience were on the field for only the first day of minicamp. The second day was used for a team-bonding activity, after which the veterans were cut loose for the summer.

McCarthy moved up the usual off-site team-building activity to last week, when he took the players and coaches bowling.

"The approach is different than the past," McCarthy said. "So, it's obviously tailored toward the younger players."

McCarthy said second-year quarterback Brett Hundley will get most of the work with what's left of the No. 1 offense.

"This is a big three-day for Brett," McCarthy said.

The three-day minicamp is the only offseason event that teams can make mandatory. However, Packers player attendance has been near perfect throughout the offseason program this year.

"This is an important thing, not necessarily for the veterans to take reps and get practice reps, but it's more about us being here, sharing information and knowledge with the young guys, setting an example, helping them develop," veteran linebacker Julius Peppers said during organized team activities.