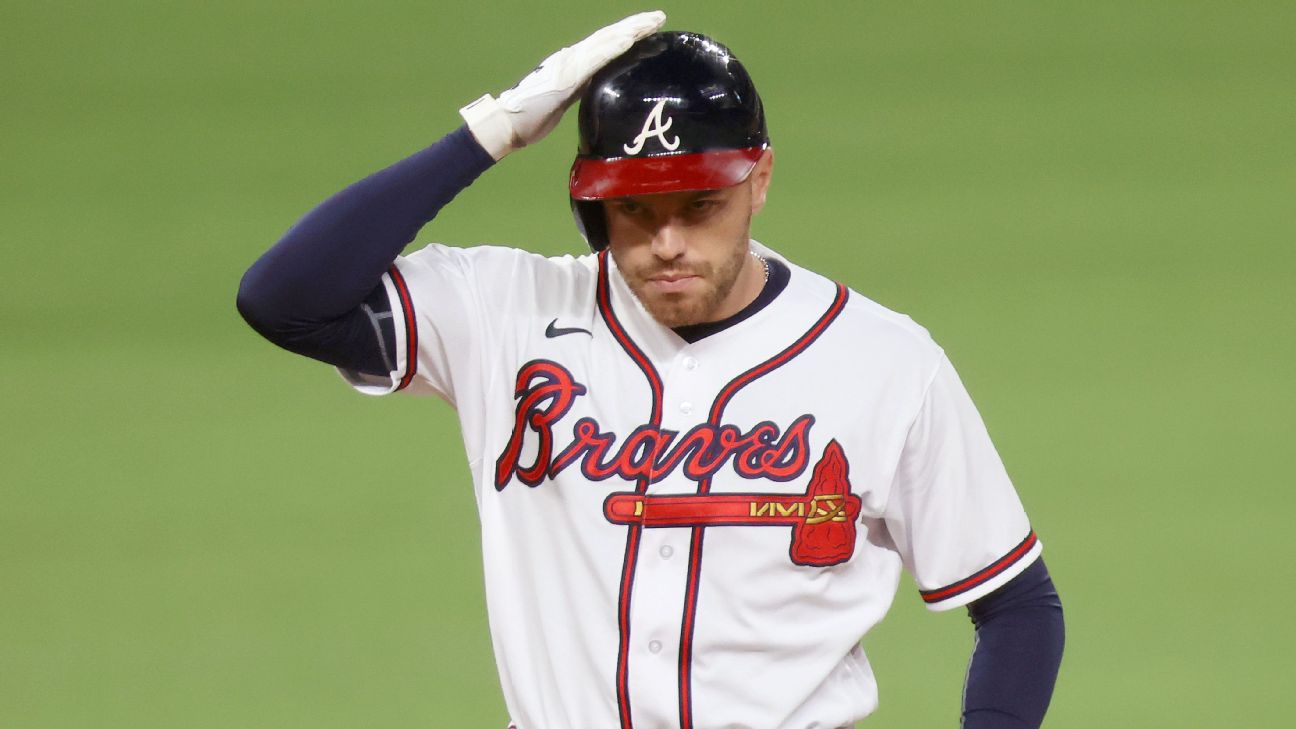 Just as you might have thought the2020 MLB playoffswere going to give you two short League Championship Series, we've seen two teams claw their way back, the Astros forcing a Game 7 after being down 3-0 to the Rays in the ALCS, and the Dodgers hammering their way to a Game 6 after the Braves got out to a 2-0 NLCS lead. We have one double-elimination game on tap Saturday, with a pennant at stake -- will we get another on Sunday?

Here's a breakdown of the games, some numbers to know, a hot take of the day and more as you prep for Saturday.

All times Eastern; all series best-of-seven played at neutral sites

The Dodgers saved their season in Game 5, riding home runs from Corey Seager and Will Smith to force a Game 6, where Buehler and Fried will once again face off on normal rest.

Buehler, fighting blisters in his pitching hand for the better part of a month, hasn't recorded an out in the sixth inning since Aug. 21. The 26-year-old right-hander allowed only one run in five-plus innings in Game 1 against the Braves, but his five walks ran his pitch count up and forced an early exit. Fried outdueled him, contributing six innings of one-run ball and striking out nine batters in an eventual win. Another performance like that, by an L.A. kid who wore Sandy Koufax's number in high school, could send the Braves to their first World Series since 1999, when Fried was 5 years old.

The Dodgers probably hope the same for Buehler. Both teams combined to use 12 relievers -- many of them typically reserved for high-leverage situations -- in what amounted to dueling bullpen days in Game 5. It finished with what might be a bright spot for the Dodgers -- Kenley Jansen, demoted as the team's closer, striking out the side and punctuating his outing with a 94 mph fastball.

"He looked like he had some confidence," Seager said. "Throughout the year, he was kinda tinkering with stuff and couldn't really find what he was looking for, and tonight, he looked like he was out there throwing, like we've always seen him do. He pounded the zone, he wasn't scared, he attacked guys. He was really, really good tonight. That was very comforting to see. That's gotta be a huge relief for him." -- Alden Gonzalez


It's a rematch of Game 2, with Lance McCullers Jr. and Charlie Morton both starting on regular rest. McCullers was actually more dominant in that game, striking out 11 in seven innings, but allowed a three-run homer in the first inning to Manuel Margot (all three runs were unearned after a Jose Altuve error). Morton pitched five scoreless innings, although it took him 96 pitches to do it. For the bullpens, only Diego Castillo threw in Game 6 among Tampa's top relievers, so the Rays are in good shape there. Note, however, that Nick Anderson actually hasn't been that unhittable in the postseason, having allowed runs in four of his six appearances. I have a feeling Cash will be looking to get a couple innings out of Pete Fairbanks. Astros closer Ryan Pressly has pitched three straight days, but thrown just 39 pitches in that span. I'm not quite sure how Baker will bridge the gap from McCullers to Pressly.

One of the big storylines coming into the series was how the Astros had the lowest strikeout rate in the majors this season while the Rays had the most strikeouts. That's exactly how things have played out. The Rays have fanned 70 times and the Astros just 45. You've sensed a little frustration on the part of Tampa Bay's pitchers with their inability to put Houston hitters away. Meanwhile, it's home run or nothing right now for the Rays' offense. A big key might be the Rays running up McCullers' pitch count and knocking him out after five innings to get to the middle relief. It's a Game 7. Enjoy. -- David Schoenfield

Updated odds for every series

Based on projections of ESPN's Bradford Doolittle

Hot take of the day

Us baseball scribes love to turn to history. Well, we have only one precedent for the Astros and Rays, and that time the team that was down 3-0 won Game 7. (That was the 2004 Red Sox, as you've probably heard roughly one million times.) It's clear the Rays are frustrated. Manager Kevin Cash said they're frustrated! If momentum does exist in baseball, it's all in Houston's direction. Of course, you create your own momentum and the Astros are hitting .268/.362/.433 in the series compared to .199/.292/.372 for the Rays.


So, the pick is the Astros, right? Are you kidding? I was with the Rays in March, when I predicted they would go to the World Series. I was with them in July, when we started back up again. I was with them at the start of the playoffs. I am not going to abandon them now. Rays win, baby! -- Schoenfield

The Dodgers have scored 38 two-out runs in the playoffs, already the sixth most ever in a single postseason and the most ever prior to the World Series.

The Rays struck first in Game 6 of the ALCS, but the wheels came off in the fifth inning when manager Kevin Cash hooked top starter Blake Snell early, only to see the Astros bust out a four-spot on the scoreboard to take a lead they'd never lose en route to a 7-4 win to earn a Game 7 chance to win the pennant again -- and return to the World Series. ... The Dodgers were also ready to extend their series instead of making way for the Braves in the NLCS. Powered by a pair of homers by shortstop Corey Seager and a key three-run shot by catcher Will Smith off Braves reliever Will Smith to take the lead in the sixth, the Dodgers romped to 7-3 victory facing an Atlanta bullpen game that had started off well behind A.J. Minter's seven strikeouts in three innings in his first-ever MLB start.

The stage was set for another Fernando Tatis Jr. moment, but Cody Bellinger snatched it away. Bellinger's home run robbery, plucking what would have been a go-ahead shot by Tatis in the seventh inning of Game 2 of the National League Division Series, kept the Padres at bay -- barely -- and will take its place in Dodgers lore, particularly if L.A. wins it all.

Randy Arozarena has gone from an unknown outfielder to this October's breakout star. Going into the playoffs, you might have been asking, "Who is this guy?" But the Rays' trade for him has been a huge factor in their postseason run. Arozarena went deep again Thursday in Game 5 of the ALCS, his third homer of the series giving him 13 since Sept. 1 (tied with George Springer for the most in baseball). And while his long balls havemade a big impression, Arozarena also leads all hitters in the postseason with 43 total bases (and is leading in hits and extra-base hits). Also,he has been flashing some leather in the outfield and some sweet celebration dance moves on the field. 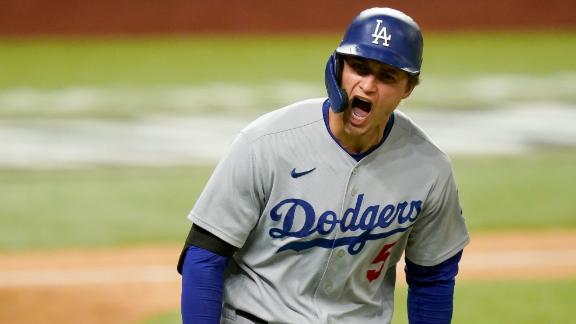 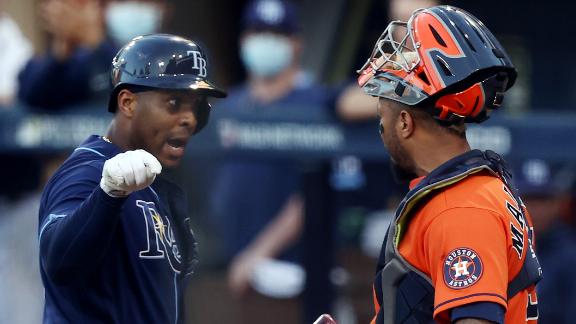