NBA free agency 2021: The players, teams and decisions that matter most this offseason 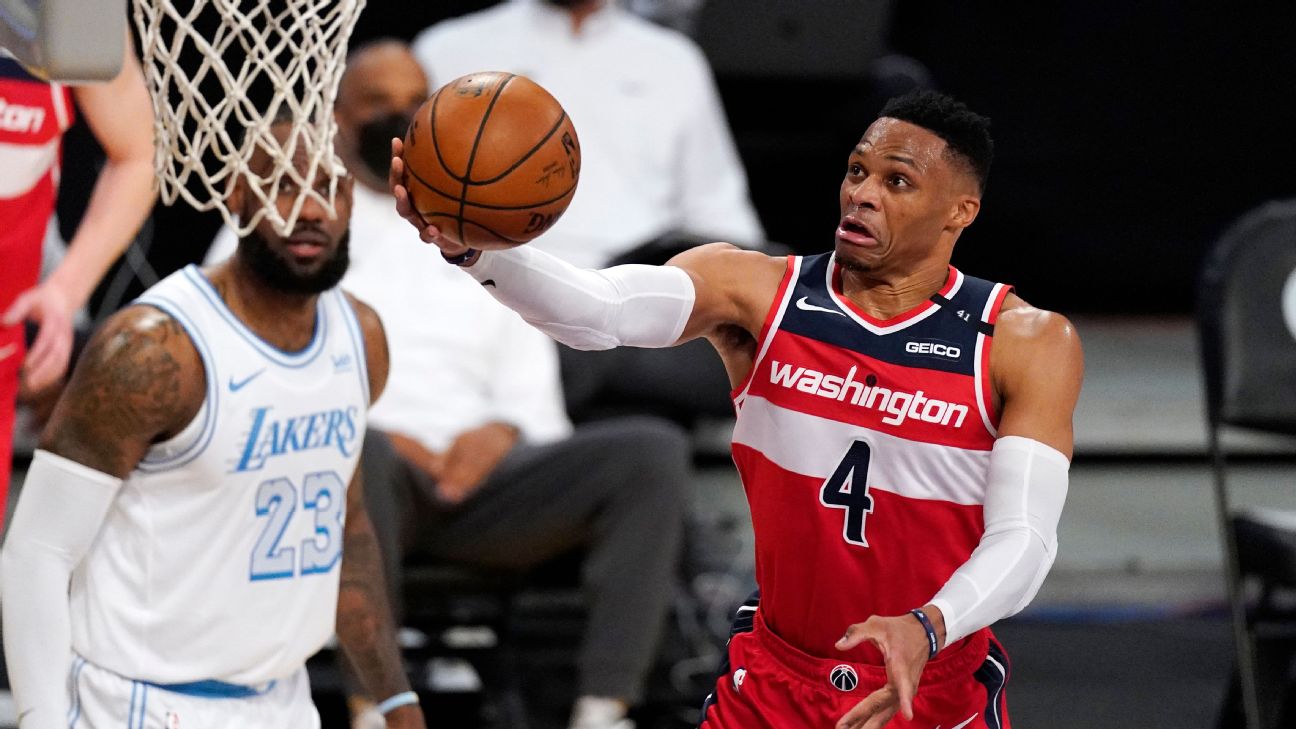 With the 2021 NBA draft in the books, it's time to shift the focus to the free-agency frenzy, where a host of storylines are set to dominate the next few weeks.

Did the Los Angeles Lakers make the right move, opting to swing a blockbuster deal for Russell Westbrook over the reported potential deal for Sacramento Kings sharpshooter Buddy Hield? Will the Philadelphia 76ers accept a deal for Ben Simmons or head into next season with the All-Star still on the roster?


And which upcoming offseason decision could most impact the road to the 2022 NBA title?

Our NBA insiders are answering the biggest questions and making their boldest predictions heading into the free-agency season, which officially begins Monday at 6 p.m. ET.

1. Which team could make the most dramatic turn -- for better or worse -- this offseason?

Tim Bontemps:The most open secret in the NBA this offseason is that the New Orleans Pelicans are desperate to improve and convince Zion Williamson he should want to be with the franchise long term ahead of offering him a full max contract extension next summer. Armed with a ton of draft picks and, after the center-swapping trade with Memphis earlier this week, lots of cap space, the Pelicans should be busy over the next 10 days.

Nick Friedell:The Golden State Warriors. It might not be a major move, but they could package their future assets, including 2020 No. 2 overall pick James Wiseman, to go all-in on this season forStephen Curry, Draymond Green and the returning Klay Thompson, who hasn't played since the 2019 Finals after suffering an ACL tear in his left knee.

Andrew Lopez: The Washington Wizards took a swing at trying to commit to building a future around Bradley Beal by opening up potential cap space in 2022-23 with the Westbrook trade. But what if that doesn't work? The rumor mill surrounding Beal will continue to churn, and if this new move goes south, drama could follow.

Tim MacMahon: Portland is in the most precarious situation due to starDamian Lillard's dissatisfaction. Should the Trail Blazers take a big swing to try to convince Lillard that they really can contend? See how things played out with James Harden in Houston after the Westbrook trade for a warning of how wrong that route might be. If Portland begrudgingly puts Lillard on the trade block, it's time for a teardown.

Kevin Pelton: I think the Dallas Mavericks are poised to leap into the West's upper echelon if they can upgrade using $20-plus million in potential cap space. Free-agent guard Kyle Lowry would offer an ideal short-term boost to a team that could use a second playmaker to help keep Luka Doncic fresh for the end of games.

2. Fact or fiction: The deal the Lakers made is better than the one they didn't.

Bontemps: Fiction. Some might not understand how Hield could be considered a better get than Westbrook, but I'm here to tell you that he would have been. The Lakers were a team with a severe lack of 3-point shooting the past two seasons. Hield, one of the NBA's best 3-point shooters, would've been perfect as a catch-and-shoot player alongside LeBron James. Instead, the Lakers trade for Westbrook, who needs the ball in his hands and is one of the NBA's worst jump-shooters. It's hard to think of a worse fit next to James from a stylist standpoint among star players than Westbrook. This feels like a classic case of chasing the big name over putting together the best team. Had that been the priority, getting Hield would've been the far better move.


MacMahon: Fiction. Adding a former MVP is far splashier, but Hield would have been a better fit. He's one of the best 3-point shooters in the league, which would have immediately addressed the Lakers' biggest need. Westbrook is one of the league's worst volume 3-point shooters, which is why teams dare him to shoot, sagging way off him when he doesn't have the ball in his hands. Westbrook is still capable of wreaking havoc and racking up triple-doubles, but he has to be the primary ball handler to be himself. How does that make sense as James' teammate?

Pelton: Fiction. I didn't love the idea of giving up a first-round pick for Hield, but the fit with the Lakers made a lot of sense given his age and their need for outside shooting. Hield also stood more chance of retaining or even adding trade value with his salary descending over the course of his contract. That's not the case with Westbrook.

Lopez: Fiction: I really liked the potential Hield deal because of the shooting it was going to provide for the Lakers. Westbrook is a career 30.3% shooter from 3-point range (second-worst all-time for players with at least 2,000 such attempts). Also, the Lakers will have over $120 million tied up in just three players -- Westbrook, James and Anthony Davis. The Hield deal would have given them slightly more room to play with under the cap.

Friedell: Fact. I absolutely believe that Westbrook will make it work in Los Angeles. Playing at home always means a little more for everybody, especially stars. Westbrook will go out of his way to get good looks for LeBron & Co.

3. Fact or fiction: Ben Simmons will be a 76er on opening night.

Pelton: More fact than fiction. I'm confident Sixers president of basketball operations Daryl Morey has read "Moneyball," in which Billy Beane lays out his five rules of trading. Rule No. 2: "The day you say, 'I have to do something,' you're in trouble. Because you are going to make a bad deal." So I don't think Morey will deal Simmons just for the sake of dealing him. He'll hold out for maximum value, which might not be available this summer.

Bontemps: Fact, but not for a lack of trying. I'm just not sure, as of now, where the offer will come from that will cause Morey to move on from Simmons this summer. If we've learned anything about Morey over his more than a decade in the NBA, it's that he isn't afraid of dealing with awkward situations and is about maximizing value. So don't expect him to trade Simmons for less than he thinks he's worth. Right now, it's hard to see anyone making a big push to pay a premium for Simmons after the way he performed in the playoffs.

Lopez: Fiction: For a while I thought this could end up being a Harden-type situation, in which Simmons would play the first few weeks in Philadelphia, but it just doesn't seem like the Simmons-Philadelphia marriage can make it any longer. Morey will continue to search for the best possible trade package, and someone will bite -- albeit maybe closer to the start of the season than during the free-agency period.

MacMahon: Fiction. Both sides see the need for a fresh start, so it isn't in anybody's best interest for the divorce proceedings to drag out into the regular season. At some point, Morey will have to come down off of his request for a "Harden-esque" return -- which is obviously asking too much considering the Sixers eagerly offered Simmons as part of a package for Harden before his value dipped due to his poor playoff performance.

Friedell: Fiction. It feels like Simmons sealed his fate in Philly after making that pass under the basket. It would be tough to bring him back knowing how low his confidence is right now. He needs a change of scenery.

4. Which free-agency/trade decision will have the biggest impact on the 2022 NBA title race?

Lopez: Remember when I said the potential Hield deal was the better deal than the Westbrook one? Well, the Westbrook one still will have major implications on the title race. Even if Westbrook's shooting doesn't help the Lakers, his playmaking will. In three of the past four seasons, Westbrook has led the NBA in points per game assisted on, with the only season he didn't lead the league being the one year he spent with Harden in Houston. Westbrook will help lighten the load on James' playmaking duties. While some shooting would have helped more, a motivated Westbrook will help cement the Lakers as the favorite in the Western Conference.

Bontemps: I'm tempted to say the Westbrook trade, because it seems inevitable that it will cost the Lakers in their chances of getting another title, but I'll say whatever happens with both Lillard and Beal. If either changes teams over the next few months, that would be the kind of move that could completely shake up the league like the Jrue Holiday and Harden deals did last season. And, if not, the fate of both will be looming over the league right up until the 2022 trade deadline.

Pelton: Chris Paul's decision on his player option. We're operating under the assumption Paul will be back with the Phoenix Suns, but if that changes, he could not only create a new contender elsewhere but also take Phoenix out of the mix to get back to the NBA Finals.

Friedell: Where does Lillard land? If he's really ready to leave Portland at some point this year, that will have a big impact on the league. I've always thought the Knicks would be a terrific landing place for Lillard, and he could form an interesting pairing with head coach Tom Thibodeau.

MacMahon: It could be Lowry, if he opts to go to the Miami Heat, Dallas Mavericks or Philadelphia 76ers. Any of those three teams could be serious contenders if they add Lowry's playmaking, shooting, defense and leadership. But it's likely the New Orleans Pelicans will make Lowry the largest offer. Will he prioritize maximizing his last big contract or putting himself in position to compete for another ring?

5. Your one bold prediction for free agency and trade season is ...

Pelton: We'll look back on the contract Ball signs as a restricted free agent as the best value of any signed for more than $10 million per season. Although Ball isn't exactly a point guard, the track record of players of his ilk outplaying their second contracts is strong, and Ball is young enough to continue improving well into a new deal.

Friedell: The Knicks will find a way to get the star they need to pair with 2021 Most Improved Player Julius Randle.

Lopez: Contracts considered untradeable don't seem that untradeable anymore. The albatross contract that Russell Westbrook signed has been moved in each of the past three offseasons. So if we're going bold, let's say maybe Houston can find someone to take on John Wall's contract, or Oklahoma City is able to move Kemba Walker elsewhere as well.

MacMahon:Thunder GM Sam Presti will figure out a way -- even after swinging a draft-night deal to add to Oklahoma City's stockpile -- to add yet another future first-round pick this offseason. 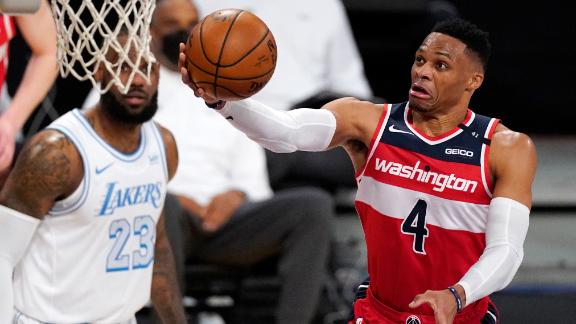