The Bubble Suns are so last year. Say hello to the Playoff Suns.

After falling behind 2-1 to the Los Angeles Lakers in the first round, the Phoenix Suns have now won eight consecutive playoff games, the longest streak in their franchise history and the longest for any team since the 2017 Golden State Warriors opened the playoffs 15-0. They won this one without Chris Paul, who joined the team via FaceTime in the locker room after the game.


Those eight wins match the Suns' total from last season's bubble in Lake Buena Vista, Florida, whereDevin Booker & Co. put the NBA on notice. Now, after their Game 1 win over the LA Clippers, they're just three wins away from reaching the NBA Finals for the first time since 1993. But even with Kawhi Leonard sidelined, Paul George isn't going to go down without a fight.

Playing in the first conference finals game in Clippers history, George finished with 34 points, looking a lot like the player who led the Indiana Pacers to back-to-back conference finals appearances in 2013 and 2014. His performance was just one of the things that caught the eyes of our NBA experts in Game 1. Here's what stood out to them and what it means for the series going forward.

Booker has what it takes to be legendary

Remember when Booker's lack of playoff experience came up in conversations about whether the Suns could be contenders?

Lesson learned: Never question the cool of a star who cruises to games in one of the lowriders from his collection.

Booker has been brilliant all postseason. His Game 1 performance, when Phoenix needed Booker to fill the leadership void created by Paul's absence, was his best yet. Booker delivered the first triple-double of his career with 40 points, 13 rebounds and 11 assists -- and nobody could claim these were empty stats, a ridiculous rap unfairly slapped on Booker during his days putting up big numbers on bad teams.

Booker scored or assisted on 43 of Phoenix's final 50 points. That included every point during the critical stretch of the game, a tiebreaking 8-0 run early in the fourth quarter. Booker grabbed the defensive rebound before three of those Suns buckets, too. He scored twice in that stretch, pulling up for a 3 and working his way to a midrange jumper off of a ball screen. But his most impressive play of that run was when he dug out a loose ball for a long rebound, pushed it in transition and hit Cameron Payne for a wide-open 3.

It took six years for Booker to get to the playoff stage with the Suns. He's making sure the wait was worth it.

Don't think of Paul George as a Robin

Through the first four games of the Clippers' Western Conference semifinals matchup against the Jazz, Leonard averaged 27.3 points, 7.5 rebounds and 4.0 assists. It might surprise you to learn that in those same four games, George had nearly the exact same averages: 27.3 points, 8.0 rebounds and 4.3 assists. This highlighted an interesting dynamic of the Clippers: They aren't led by a traditional "Batman and Robin" duo. No, they have multiple Batmen.

As such, with Leonard sidelined with a knee injury that has kept him out the past three games, the Clippers aren't faced with replacing their primary option. Instead, they're really replacing the secondary production that George usually provides. Against the Jazz, they manufactured that production from their perimeter shooters by playing small ball and taking advantage of Rudy Gobert's lack of mobility. The Suns don't have that particular weakness, so even though George dropped 34 points the Clippers didn't get enough from those peripheral players to win.


Moving forward, potentially still without Leonard, the Clippers don't need to worry so much about George in the first seat, where he has proved he'll be fine. Instead the question is whether Terance Mann, Reggie Jackson or one of the others can be a consistent, effective Robin. And that's a big ask.

Facing a quick turnaround from knocking out the Utah Jazzon Friday night to opening the Western Conference finals in Phoenix on Sunday afternoon, Clippers coach Tyronn Lue planned to open up his rotation even before his hand was forced by the knee soreness that limited Marcus Morris Sr.'s minutes after halftime.

By the end of the Clippers' first two series, Lue had almost entirely gone away from using traditional centers. But the Suns have Deandre Ayton, making size a more favorable option for the Clippers in this matchup. Ivica Zubac started the second half in place of Morris, and DeMarcus Cousins played off the bench in both halves, utilizing his size advantage against Phoenix backup Dario Saric. The Clippers did go small for the final 5:44 of the game.

As he has throughout the playoffs, Lue will surely pare down his rotation as the series evolves. Cousins can cause Saric problems, but the Clippers must limit his minutes against the 6-foot-11, 250-pound Ayton, who matches up well physically with the 6-10, 270-pound Cousins. Separating Cousins from backup guard Luke Kennard -- who was out of the rotation after halftime -- will also help the Clippers shore up the second unit defensively. And despite his seven assists in 22 minutes, Rajon Rondo might not offer enough else to justify a key role. The Clippers were outscored by 14 points with Rondo on the court.

Deandre Ayton is a big difference-maker

If there was any thought Ayton would be rendered as ineffective as Gobert was by the LA Clippers, it took one half for that idea to be dismissed.

A stronger interior scorer, Ayton quickly racked up seven field goals and 14 points in the first half of Sunday's game, on his way to 20 points and nine rebounds in 37 minutes on the night. While he might not be completely comfortable in sets where the Clippers are running five perimeter players, he's quick enough on his feet that he can't be exploited.

And whenever Ayton is on the court with Zubac, a solid starting center in his own right, Phoenix has a clear advantage.


Ayton's play both in the first round against Los Angeles Lakers star Anthony Davis (before he got injured) and in the conference semifinals against league MVP Nikola Jokic was eye-opening. He proved in those matchups that he's more than capable of being a difference-maker in the playoffs -- a difficult hurdle to clear for big men in this day and age. That gives the Suns another reason to feel confident in their chances of advancing to the NBA Finals for the first time since 1993.

Cameron Payne was ready for his moment

With Paul (COVID-19 protocols) out of the lineup, the Suns turned toCameron Payneas their starting point guard alongside Booker in Game 1. As he has shown throughout most of the season, Payne didn't back down when he got his chance. The 26-year-old scored 11 points and made nine assists against just one turnover in 29 minutes, providing the kind of stabilizing presence the Suns were looking for in Paul's absence.

The performance has to feel even sweeter for the former lottery pick, who struggled in five disappointing seasons with the Oklahoma City Thunder and Chicago Bulls, but has changed the narrative on his career since signing with Phoenix just before the season restarted in the bubble a year ago. Payne shot 44% from beyond the arc during the regular season and found a niche for himself on a team that is three wins shy of an NBA Finals berth.

Payne's dedication has been apparent throughout the past year, as he played his way back from China to the G League to carve out a consistent role on a title contender. His ability to produce in Paul's absence will continue to earn validation from many around the league who previously questioned whether he could play on this level. 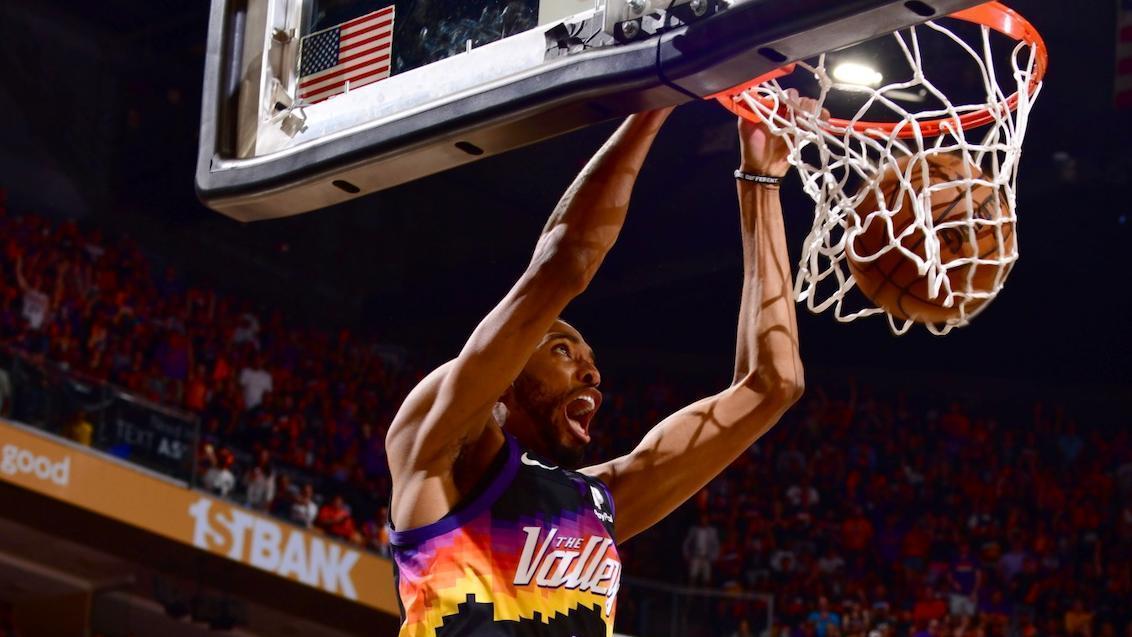 Booker's lob to Bridges ignites the crowd, notches triple-double
Devin Booker races down the court to throw a lob pass to Mikal Bridges for an electric dunk that sets off the Suns crowd in the fourth quarter. 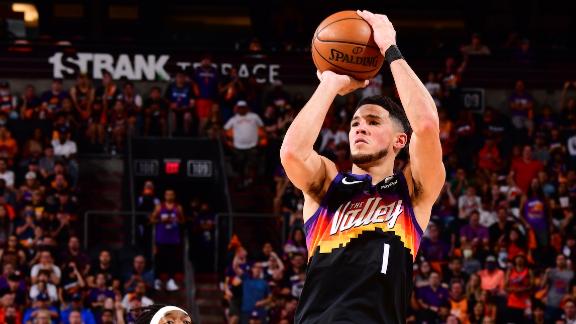 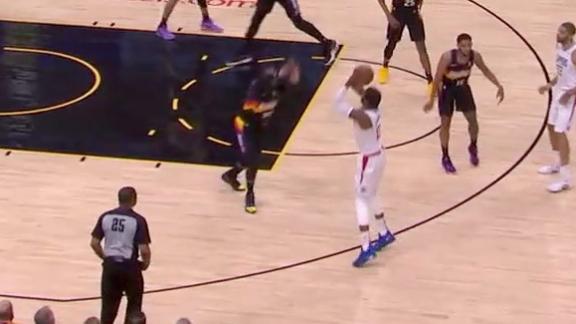 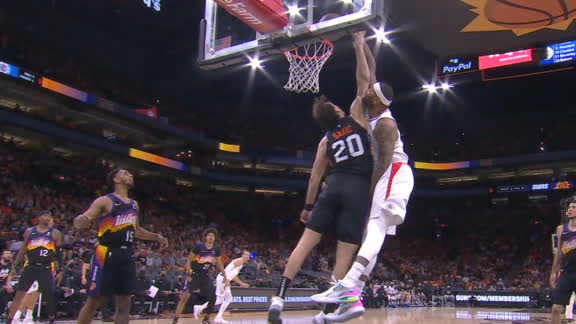 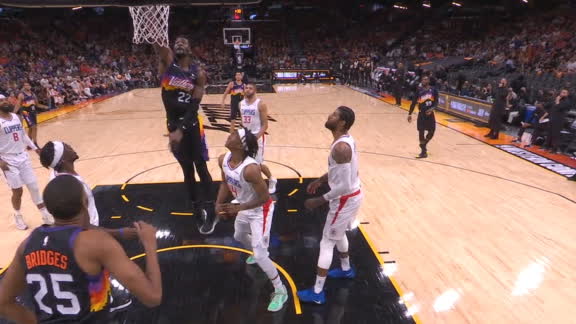