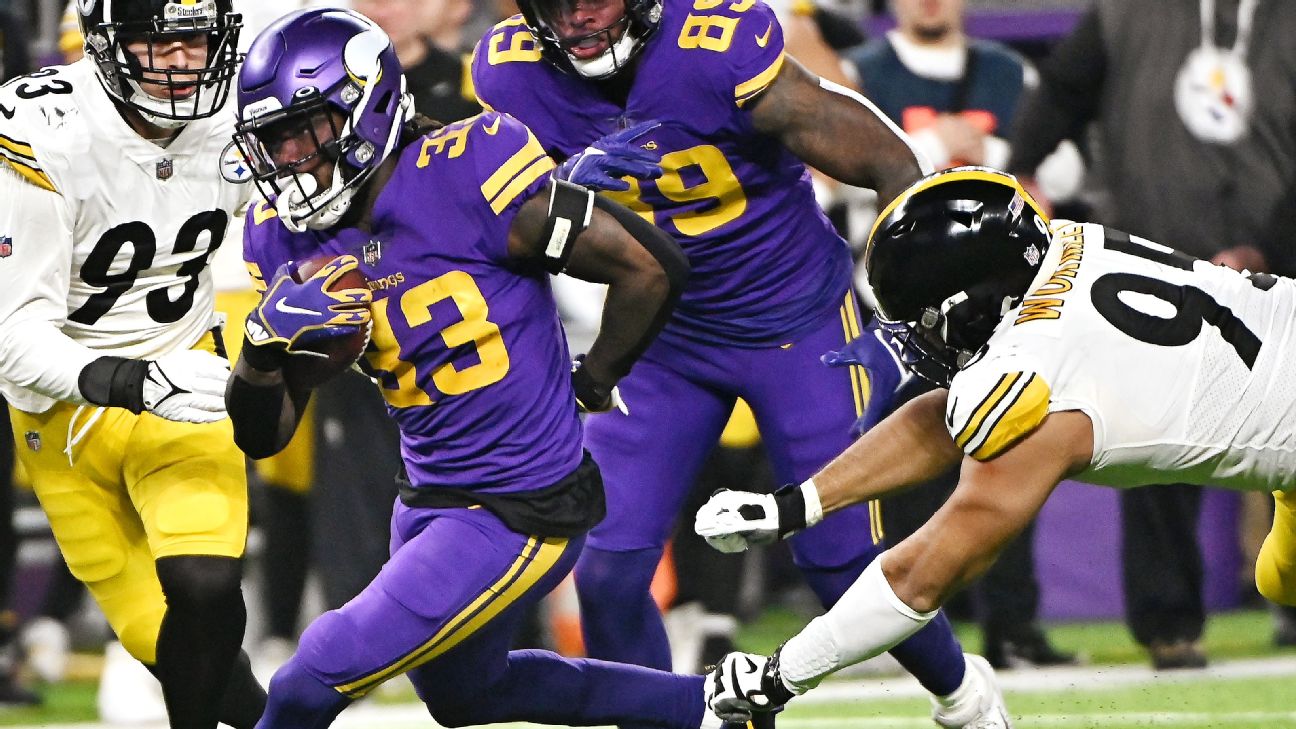 Those of us in the word business had been running out of ways to say that the AFC playoff picture is complete chaos. On Monday night, we started getting some clarity. And on Thursday night, we got a little more.

A wind-influenced game in Buffalo finally gave us an idea of where the AFC is going. The New England Patriots, just as we all predicted, won a 14-10 road game over the Bills on Monday by running on all but three of their offensive plays. The win lifted the Patriots to the top of the conference and pushed the Bills back into an eight-team competition for the AFC's two wild-card spots. Meanwhile, the Pittsburgh Steelers saw their playoff chances fall to nearly unrecoverable depths in a wild 36-28 loss Thursday night to the Minnesota Vikings.


Regardless, the AFC still has plenty of questions. There remain teams near the top that have a decent chance to fall out of the race entirely, and there are teams outside the top seven that could still wind up winning their divisions. Overall, according to ESPN Stats & Information research, the 2021 NFL playoff race is the first time in 19 years that every team in a conference has at least four losses through Week 13. Let's run through the entire playoff picture as it stands now. As always, we'll combine ESPN's Football Power Index with a little bit of human instinct to sketch out where the league is headed.

The Patriots' throwback season continued Monday night with their seventh consecutive victory. The win put them in the driver's seat in the AFC East and gave them by far the best chance to clinch home-field advantage as the AFC's top seed, per FPI. The Patriots now have a bye to rest up for the stretch run.

As they sat at home on their Week 13 bye, the Titans moved right back into contention for everything their season once seemed headed for, including home-field advantage in the postseason. For now, they'll turn their attention toward a final stretch that includes only one game against an opponent that currently has a winning record (Week 15 against the Steelers).

It's nail-biting time in Baltimore. Over its final five games, Baltimore is scheduled to play four teams that currently have winning records and one that is .500. Suffice it to say, the Ravens are within range of both the AFC's top seed and missing the playoffs altogether. FPI still considers them the favorites in the AFC North, as it should, but the variance of possibilities is real.

The Chiefs are one game ahead of the Chargers in the AFC West, and they're two ahead of the Broncos and Raiders. More importantly, they are statistically even with the Titans and Ravens, and just a half-game behind the Patriots, in the race for home-field advantage in the AFC. FPI is not giving them a great chance to do it at 10.9%, but it's notable that they are even in the conversation given where they were six weeks ago.

The Chargers are one of the most difficult teams in the NFL to figure out. In the past month, they've lost to the Vikings and Broncos while defeating the Steelers and Bengals. Add it all up and they're squarely in the AFC wild-card race. Their Week 13 win in Cincinnati pushed their conference record to 5-3, an important tiebreaker, and obviously gave them the head-to-head tiebreaker advantage over another wild-card competitor. They have two very favorable games remaining on their schedule: against the Giants on Sunday and at the Texans in Week 16. Would 9-8 be a good enough record to qualify for the AFC playoffs?

There's no way to sugarcoat it. The Bengals missed a big opportunity in a Week 13 loss to the Chargers, and all five of their remaining opponents are at .500 or better. FPI is giving the team less than a 50-50 chance to make the playoffs.

The Bills missed a massive opportunity Monday night to put themselves in position to win the AFC East and challenge for home-field advantage in the playoffs. Instead, they're currently fighting for an AFC wild-card spot, with a tough schedule that includes games against the Buccaneers and at the Patriots.

In the AFC hunt

While they'll face a run of playing the Patriots, Cardinals and Raiders when they return from their bye, the Colts are in decent shape to make the playoffs.

The Week 13 loss to Washington might have been all she wrote for the Raiders, who have now lost three of their past four games. Of their five remaining opponents, four have winning records, beginning with their game at the Chiefs on Sunday.

The Steelers are down to a 10.3% chance to make the playoffs, according to FPI, after their terrible performance Thursday night in Minnesota. Their remaining schedule is pretty brutal, with games against the Titans, Chiefs, Browns and Ravens awaiting. The only thing left now, it appears, is their inevitable elimination from playoff contention.

The Browns spent Week 13 in their bye and, in a weird twist, they'll return to play the same opponent (Ravens) they most recently faced.

The Broncos could have overtaken the Chiefs and Chargers for AFC West supremacy with a win Sunday night. Instead, they fell back in the AFC pack. Denver now prepares for the Lions.

We include the Dolphins here because they have won five consecutive games heading into their bye and have a favorable matchup in Week 15 at home against the Jets when they return. But they'll finish the regular season with games against the Titans and Patriots.

The Cardinals picked up after their bye week in better shape than when they went into it, and now they can clinch a playoff spot with a win on Monday night. But the Cardinals have a more difficult remaining schedule than the Packers or Buccaneers, as they still have to face three teams that currently have winning records (Rams, Colts and Cowboys). Here's one semi-oddity to consider as Arizona pursues home-field advantage in the NFC: It has the NFL's best road record (7-0), and both losses have come at home. As the Cardinals look to hold their advantage in the NFC West, three of their final five games are at State Farm Stadium.

The Packers' already sizable advantage in the NFC North grew in Week 13 as they sat back on their bye week. It has been a while, of course, since we gave serious thought to anyone other than Green Bay winning this division. Regardless, it's just a matter of time; the Packers have one game remaining (Week 15 at Baltimore) against a team with a winning record. The more pertinent question is whether they can overtake the Cardinals for the top seed in the NFC.

That's now three consecutive wins for the Buccaneers after a two-game losing streak at midseason, but they remain in the third seed because of a one-game deficit in the conference-record tiebreaker. Of more immediate relevance is Tampa Bay's four-game lead in the NFC South. With three teams behind it at 5-7, a Week 14 clinching moment could come with a win and both the Falcons and Saints losing. Tampa Bay has one game remaining against a team with a winning record (Week 14 against the Bills), making it a near lock to win the division based on FPI projections.

It wasn't pretty, but the Cowboys snapped a two-game losing streak in Week 13 and took another step toward locking down the NFC East title. Dallas has two games remaining against the surging Washington Football Team, including Sunday.

The Rams did in Week 13 what should be expected of any legitimate playoff contenders: They dominated the Jaguars at home. Let's not assume, however, that Los Angeles has cured all the issues that prompted its now-snapped three-game losing streak. We should get a much better idea when the Rams travel to play at Arizona on Monday night. Can they really put together a late run to overtake the Cardinals in the NFC West? That seems highly unlikely on multiple fronts. The good news is that the Rams, after dismantling the Jaguars, are a near lock to be a wild-card team based on FPI.

The Week 13 victory over the Raiders was Washington's fourth consecutive win, completing a journey to .500 after a 2-6 start. And now things really start to get interesting. Washington has two games in the next three weeks against the NFC East-leading Cowboys. That means it can ensure a division title by winning out, though some other combinations of wins and losses could also do it as well. But let's not go overboard. Beating the Cowboys twice, or somehow otherwise making up two games on them over the final five games, will be a challenge. And with two games remaining against the Eagles as well, its spot in the wild-card race is hardly ensured, either.

Next up: vs. Cowboys

The 49ers have one of the most difficult schedules remaining for a wild-card contender. Games at the Bengals, Titans and Rams are sandwiched around home games against the Falcons and Texans. San Francisco is 4-2 on the road already this season, but the quality of opponents in its remaining away games is formidable.

In the NFC hunt

Had the Vikings lost Thursday night, they would have been down to a 15% chance to make the playoffs, per FPI. As it turned out, their win over the Steelers boosted that likelihood to 32.3%. Two of their four remaining games are against the 4-8 Bears so, well, anything's possible.

The Panthers fired offensive coordinator Joe Brady over their bye weekend. Some will interpret that as a sign that their season is over, while others will believe it gives them a chance to get back into the playoff hunt. We'll lean toward the former, even as the Panthers get set to host the Falcons.

In the big picture, the Falcons have lost four of their past six games. Their only victories since October have come against the hapless Jaguars and the undermanned Saints. The Panthers are a beatable opponent on Sunday, but there isn't much reason to feel optimistic about a Falcons surge in the coming weeks.

The Saints lost a winnable game in Week 13, but they now head into a Sunday matchup at the Jets. 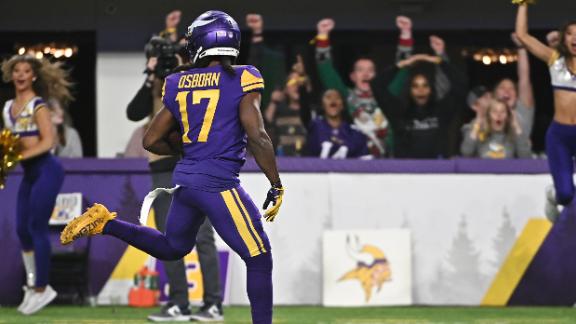 Cousins airs it out to Osborn for 62-yard TD
The Vikings extend their lead in the fourth quarter as Kirk Cousins goes long to K.J. Osborn for the 62-yard touchdown. 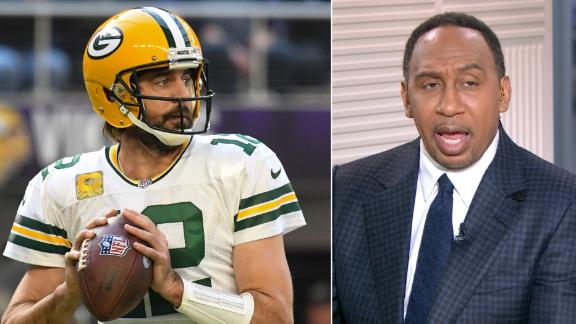