NHL Power Rankings: 1-31 poll, plus the player with the most to prove on every team 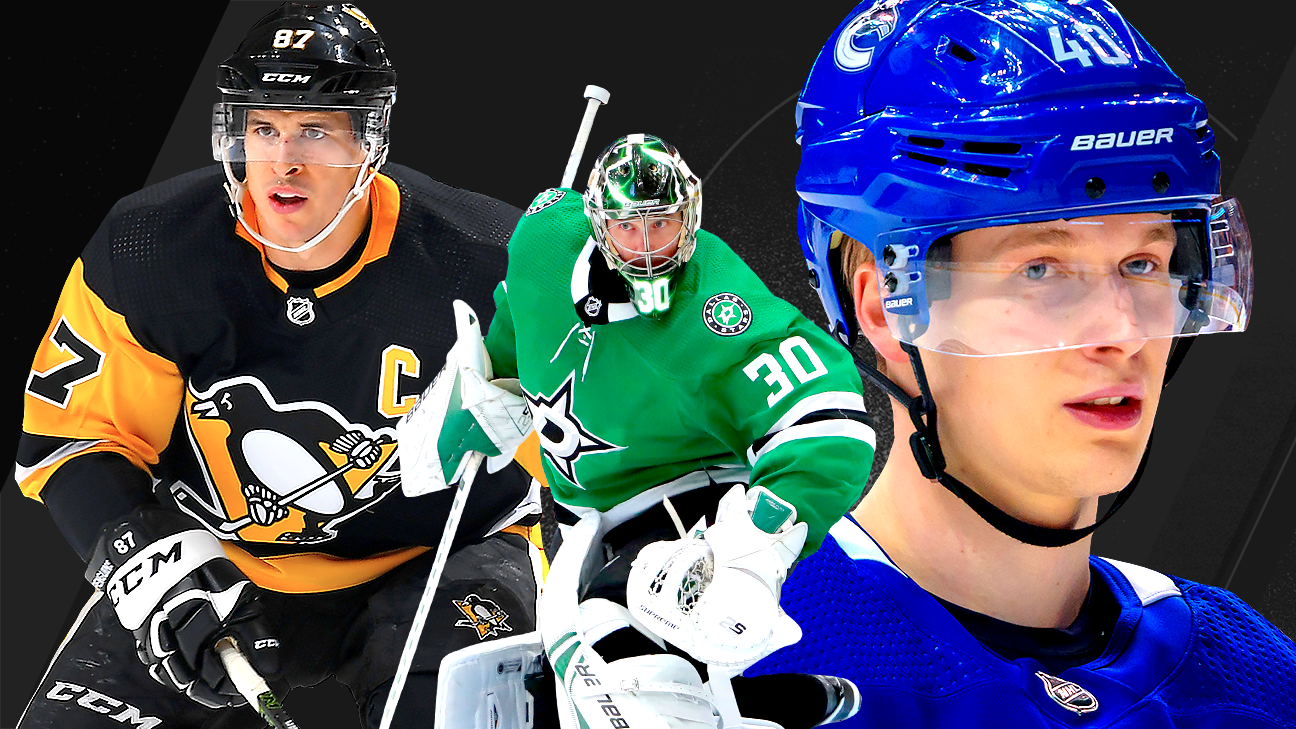 The stress of the NHL trade deadline is over, and it has been replaced with a completely different kind of pressure: trying to excel in the stretch run of the 2019-20 season.

In this week's NHL power rankings, we look at some of the players under the most pressure as the games tick down to the postseason.

How we rank: The ESPN hockey editorial staff submits selections ranking teams 1-31, and those results are tabulated to the list featured here. Teams are rated through Tuesday night's games, taking into account overall record, recent success and other factors such as injuries.

Note: Standings point pace is based on games through Feb. 26. Many stats are courtesy of Hockey Reference.

Ondrej Kase. The Bruins' key deadline acquisition is expected to slot next to David Krejci. The rest of the regular season will be a proving ground for their chemistry, and the oft-injured winger's ability to stay in the lineup.

Tyler Johnson. The center is having his lowest PPG season (0.48) since his first in the league, has 10 points in his past 24 games and one point in his past nine. The arrival of Barclay Goodrow, who might slide in on his wing, will hopefully make a difference.

Braden Holtby. The Capitals goalie is facing unrestricted free agency this summer and is having statistically his worst season in the NHL (.897 save percentage, 3.12 goals-against average). He is 6-8-1 with an .880 save percentage in his last 17 appearances.

Conor Sheary. Talk about a new lease on life. Sheary was traded to Buffalo in 2018 after winning two Stanley Cups with the Penguins, spending a good amount of time as Sidney Crosby's linemate. After an underwhelming tenure in Buffalo, he was traded back to Pittsburgh, where he might be right back on Crosby's line if he earns it.

Jordan Binnington. The playoffs are nearly here. He's going to be fine. That said ... Binnington has an .896 save percentage over his past 18 games, including an .879 in seven road games. A bit of a change from last season, when he posted a .945 save percentage in February.

The injured. Avalanche coach Jared Bednar said he expects forward Matt Calvert, goalie Philipp Grubauer, center Nazem Kadri, right wing Mikko Rantanen and forward Colin Wilson all to be back by mid-March. Colorado fans continue to hold their breath that they will return -- and that no one is added to the list.

Alexander Radulov. The Stars winger has 33 points in 56 games, but only five points in his past 15 games, including just two goals. With the Stars scoring 2.68 goals per game, they can use all the offense they can get.

Sean Couturier. One of the leaders in the Selke Trophy race, the 27-year-old has a shot at leading the Flyers in scoring for the first time in his career. He has 25 points in his past 24 games.

William Karlsson. "Wild Bill" returned to the Knights' lineup on Feb. 11 and had three points in six games before Tuesday's hat trick against the Ducks. Vegas is 6-1 since his return.

Jean-Gabriel Pageau. The big trade deadline acquisition made a heck of an impression in his debut game with the Isles, with a goal and 17 penalty minutes. The Islanders have a 67.3% chance of making the playoffs, per Money Puck, and his performance is going to be a key in securing a spot.

Nino Niederreiter. Perhaps the arrival of Vincent Trocheck gets the winger going, as El Nino has seven points in his past 22 games, putting him on pace for his lowest PPG average (0.44) since 2013-14 with the Wild.

Thatcher Demko. With Jacob Markstrom on the shelf for at least two weeks, Demko will be tasked with holding down the Vancouver crease. He has a 4-2-1 record in his last nine games with a .906 save percentage. His 37-save performance against Montreal on Tuesday was a great start.

Andreas Athanasiou. The speedster was acquired from the Red Wings at the trade deadline, and Edmonton made all of our dreams come true by putting him on Connor McDavid's wing. Don't blink or you'll miss them.

The blue line. The Maple Leafs, a team for whom defense is a challenge, now have their two best defenders on the shelf. Jake Muzzin(broken hand) is out a month, joining Morgan Rielly, who hasn't played since early January, in the press box. Good luck to the healthy Leafs defenders, akaTyson Barrie and several current and recent Marlies.

Gustav Nyquist. As the Jackets stumble through a number of injuries, including a few at forward, they could use a bit more from The Goose. He's heating up a bit, with four points in his last seven games.

Chris Kreider. The Rangers gave him the seven-year deal he was seeking. He can start earning it immediately with an effort that lifts the Rangers to an unexpected playoff spot in the last month and change of the season.

Sergei Bobrovsky. As Bob goes, so go the Panthers. He is 9-7-1 in his past 17 appearances with a .906 save percentage, but he has won three of his last four starts.

Viktor Arvidsson. The Predators winger, with just six points in his past 24 games, is one of a handful of Nashville offensive stars who haven't been shining this season. Perhaps his goal against Ottawa on Feb. 25, just his second in 14 games, gets him going.

Johnny Gaudreau. After taking the most infamous restroom break of the trade deadline, Johnny Hockey can continue his resurgent offensive season. The winger has 24 points in his past 25 games; Calgary won 14 of them.

Clayton Keller. The Coyotes star had an incredible December, with 13 points in 14 games. Since then, he has cooled off to 11 points in 27 games, although a recent three-point night against Tampa was encouraging. The offensively starved team needs his spark.

Connor Hellebuyck. He has carried the Jets for most of the year, but they need him to finish strong. Hellebuyck is only 9-9-2 in his past 20 appearances with a .911 save percentage. For the season, it's at .918.

Jonathan Drouin. He returned from injury on Feb. 8 in body, but not on the score sheet: Drouin went scoreless in his first eight games back, skating to a minus-10. That can't happen down the stretch if the Habs are to have a prayer at the wild card.

Mats Zuccarello. It has been a rough first season in Minnesota for Zucc. The general manager who signed him was fired, followed by his head coach. The winger has 10 points in his last 23 games, although he has had a recent uptick. Momentum headed into next season is important, wherever that next season might be.

Jeff Skinner. The winger missed most of January with an injury, and he scored his first goal since Dec. 2 in a win over Pittsburgh on Feb. 22. He has four points in his last 21 games. Not exactly how one wants to begin an eight-year contract extension, but there's still time for Skinner to close strongly.

Kirby Dach. The Blackhawks are giving the third overall pick of the 2019 draft a prominent role this season, and he has responded in fits and spurts: A five-game point streak entering this month followed a stretch of 27 games in which he had a single point. The Hawks would love to see some consistency from their strong young forward down the stretch.

Sonny Milano. It's just one game, but boy did the 23-year-old winger look good in his debut with the Ducks. He's a restricted free agent this summer, and one assumes he'll get the ice time to leave an impression on the Ducks.

Jack Hughes. When the book is closed on his career, no doubt this rookie season will be a regrettable prologue. Hughes has five points in his past 18 games. This final stretch is all about confidence-building for last summer's first overall pick.

Aaron Dell. The 30-year-old has been one of the low-key best goaltending stories of the season, with a goals saved above average of 7.2. (His crease-mate Martin Jones is at 0.4; both rates per Evolving Hockey.) Dell is an unrestricted free agent this summer, and has made a bold case for himself in San Jose or elsewhere.

Anthony Duclair. It's a tribute to the Duke's first half of the season that his overall numbers look solid: 22 goals and 15 assists in 62 games. But the reality is that the pending restricted free agent has one goal in his past 25 games. That's not exactly something to bring to the negotiating table.

Gabriel Vilardi. The 20-year-old center's long, injury-filled journey finally led him to the NHL this season. The Kings, their fans and Vilardi himself are eager to see what the 11th overall pick from 2017 is able to do in their remaining games.

Tyler Bertuzzi. Is there some kind of All-Star Weekend curse we're unaware of? The Wings forward started off the season with 23 points in 29 games; in his past 26 games, he's had 11 points, skating to a minus-16 in those contests. 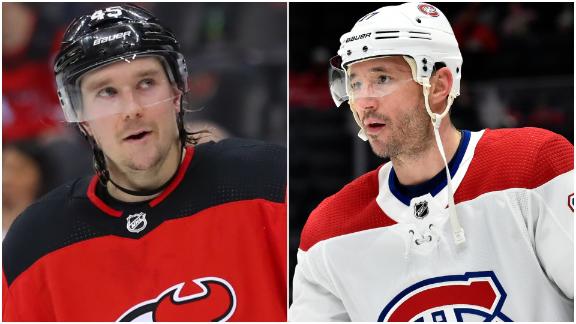 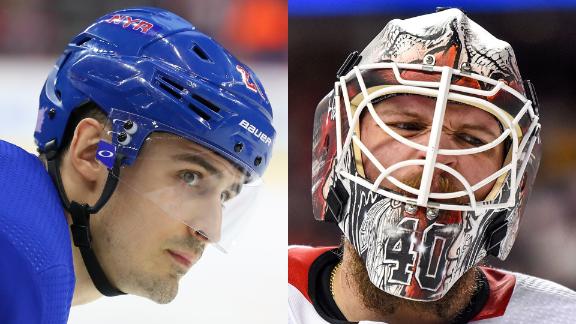