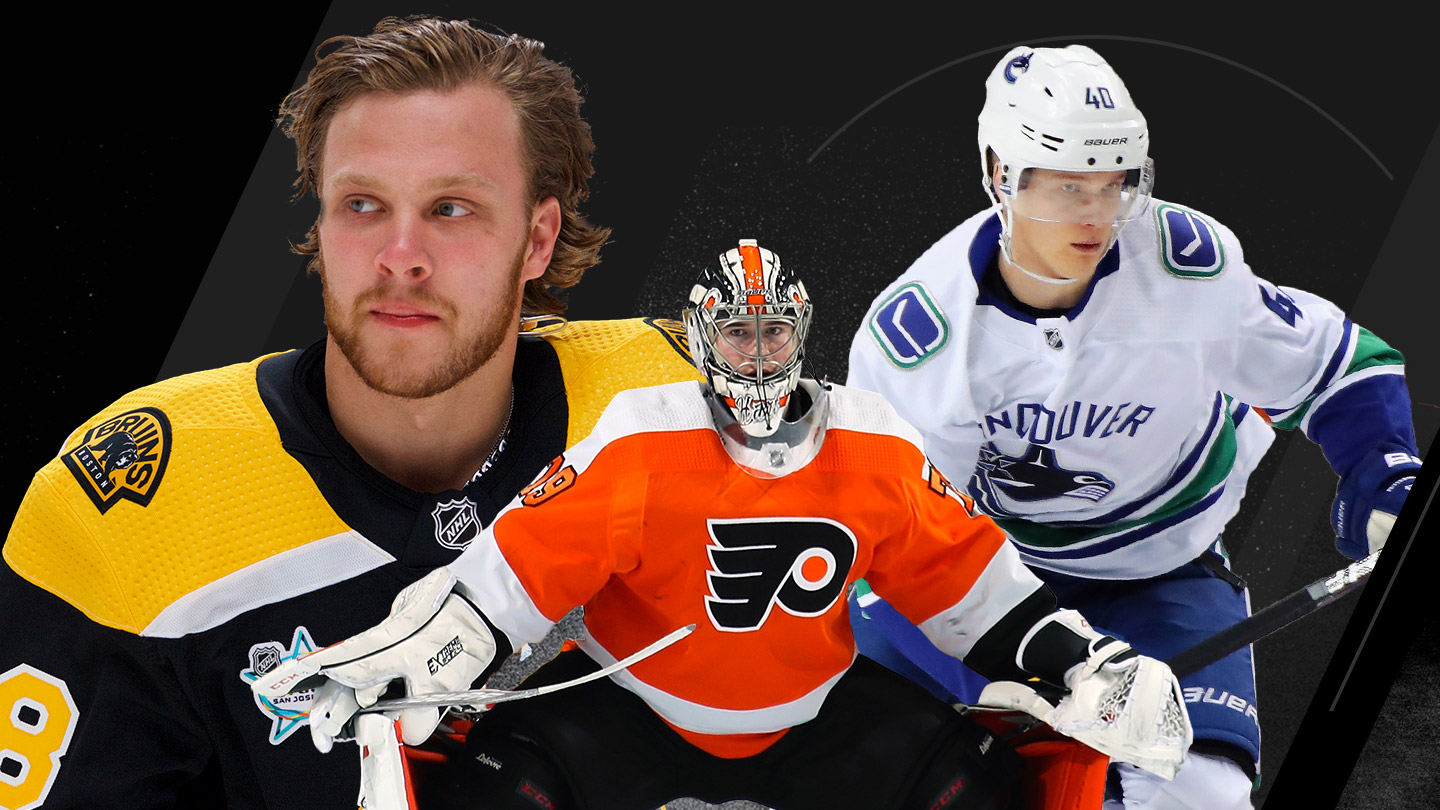 Auston Matthews' lucrative new deal with the Maple Leafs set a precedent, but it also means that when it kicks in next season, the two contracts with the highest cap hits in the league belong to players under the age of 23 (the other being Connor McDavid, of course).

Welcome to the modern NHL, where youth rules the day. For this week's power rankings, we identified the most impactful 23-and-under player on each team.

The ESPN hockey editorial staff submits polls ranking teams 1-31, and those results are tabulated to the list featured here. Teams are rated through Tuesday night's games, taking into account overall record, recent success and context such as injuries.

A 2014 third-round pick, Brayden Point is outproducing the more established superstar on Tampa Bay's roster, Steven Stamkos. Through 52 games, Point has already matched his career high of 66 points, thanks to chemistry with Nikita Kucherov.

This 12-minute video is dedicated to Matthew Tkachuk "pissing people off as a rookie." Don't let that overshadow his skill. The winger is one of four Flames forwards averaging more than a point per game this season.

Patrik Laine is in a bit of a slump. He has scored only twice in his past 21 games. The Finn still profiles as the best pure sniper since Alex Ovechkin. The 20-year-old already has accumulated 105 goals through 208 career games.

The veteran Sharks have only two regular 23-and-unders in their lineup: Timo Meier andKevin Labanc. Switzerland native Meier is coming into his own this season, averaging 1.31 goals and 1.93 assists per 60 minutes.

The Stanley Cup-starved Maple Leafs let us know what they think of Auston Matthews by giving the young American-born center a deal with an annual average value worth 14.6 percent of the current cap -- the second-highest percentage in the league.

Mathew Barzal will be the face of the franchise for years to come (well, promoted individually only as much as GM Lou Lamoriello will allow). Following up his Calder Trophy season, Barzal is again leading the team in points.

It's slim pickings for youngsters on David Poile's roster, but the nod goes to No. 2 goaltender Juuse Saros (.922 save percentage, 2.43 goals-against average during the past three seasons as Pekka Rinne's primary backup).

David Pastrnak leads the league with 15 power-play goals, and is in the top 10 in scoring overall. Pasta is the real deal, and a real steal at No. 25 of the 2014 draft. Only one player selected ahead of Pastrnak (No. 3 pick Leon Draisaitl) has been more productive.

Next season, Jesperi Kotkaniemi -- a mild surprise No. 3 pick in the draft, and a definite surprise to make the regular roster at age 18 -- is probably most impactful. For now, it's Max Domi, leading the team with 47 points. (Domi is 23 only until March 2 though).

The Penguins opened the season with the second-highest average age in the league (28.7). That's how a midseason trade acquisition, 22-year-old defenseman Marcus Pettersson, has ended up as their most impactful youngster.

It's a toss-up between the only two regular 23-and-unders on the roster: winger Alex Tuch (who leads the team with 40 points) and defenseman Shea Theodore, perhaps the team's most well-rounded blueliner.

Following the Stanley Cup run, Jakub Vrana has found momentum. The second-line winger has upped his totals in goals per game (0.30, up from 0.18) and points per game (0.58, up from 0.37) as he quickly has become a fan favorite thanks to his bubbly personality.

Pierre-Luc Dubois has 48 points through 52 games, matching his 82-game total from last season. The Blue Jackets always believed in Dubois, but fans wanted more sooner. It didn't help fans' patience when the two guys drafted ahead of him were Auston Matthews and Patrik Laine, but Dubois is emerging as a building block.

The team's lone All-Star was 19-year-old defenseman Miro Heiskanen, who has been a delight through the first half. He has seamlessly carried a big workload (23:08 average ice time), but now must stave off the infamous rookie wall.

The oldest team in the league, the Wild don't have many regular candidates to choose from. Jordan Greenway wins by default of playing the most games (52) and having the highest upside, though the winger has only nine goals and eight assists this season.

As the Sabres grind down the stretch looking to break a seven-year playoff drought, everything will run through the captain, Jack Eichel. He's the heartbeat of this team, and on pace for 94 points, which would smash his previous best of 64.

With an impressive 64.06 goals for percentage (sixth among all league centers who have played at least 600 minutes) Sebastian Aho is sparkling on the Canes' top line. The team now has a legitimate star, which should be reflected in his next contract.

It feels like a shame bypassing Mikko Rantanen, considering he's fifth in the league with 74 points in 52 games. But right behind him is linemate Nathan MacKinnon (72 points), the reigning runner-up for league MVP who doesn't turn 24 until September.

As the Blues improbably surge back into the playoff picture, let's give kudos to blueliner Vince Dunn, who is following up on his solid freshman campaign with more offensive production and more confidence.

The rookie taking the league by storm has transformed this franchise from forgettable in the rebuilding phase to relevant and on the playoff bubble. The Canucks have a plus-33 goal differential when 19-year-old Elias Pettersson is on the ice ... and a minus-45 when he's off.

The Flyers have reeled off a season-high eight-game win streak, thanks in large part to Carter Hart. The 20-year-old looks like the end to the goalie carousel; in 16 starts, he has 10 wins, a .925 save percentage and 2.48 GAA.

The Coyotes are the fourth-lowest scoring team in the league, which explains how their leading scorer has only 11 goals and 37 points. That's Clayton Keller, who will be the face of this franchise for years to come.

This season has been all about transition, though the youngest players are still struggling to find their way. Though he has slipped lately, the nod goes to 23-year-old Neal Pionk who -- for the most of the season -- had been the team's No. 1 defenseman and power-play quarterback.

The Panthers are staying afloat in the playoff race, barely, but if they make the cut, they have Aleksander Barkov to thank. He leads the team in points and has long been lauded for his defensive play. Has the Finn finally shed the label of most underrated player in the league?

Alex DeBrincat often gets overshadowed by the brand-name stars on this team, but don't discount the 21-year-old winger or his diminutive frame. The 5-foot-7 DeBrincat has simply been a goal-scoring machine at every level of hockey, including 26 so far for the suddenly surging Blackhawks.

The best player in the world leads this team: 21-year-old Connor McDavid. He has scored or assisted on more than 50 percent of the team's 178 goals this season and, for better or worse, seems committed to being there as management tries to right this ship.

As the Ducks sink into the abyss -- only two wins since Dec. 18! -- it feels fitting that the best 23-and-under player was Ondrej Kase (11 goals and 20 points in 30 games), who is now out for the season as he'll have surgery on his torn labrum.

This season will be either be long forgotten, or celebrated in franchise folk lore as the time they really did lose for Jack Hughes. Either way, there is one player who has consistently produced in this journey: Dylan Larkin, who has a team-high 22 goals and 49 points.

On a team laden with aging contracts, there aren't many players (let alone young players) producing. Adrian Kempe, 22, has dipped in production from last season's level but still figures to be an important part of the future.

The Devils have 12 players 23 or under who have suited up this season. So far, the best has been Nico Hischier (16 goals, 20 assists), who this week wore an "A" on his jersey for the first time.