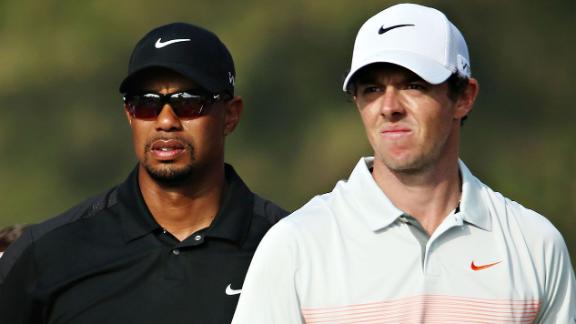 LOUISVILLE, Ky. -- Jack Nicklaus has gotten to know Rory McIlroy since the Northern Irishman moved to Florida a few years ago, and the Golden Bear does not hold back in his praise for the No. 1-ranked golfer in the world.

Interviewed on ESPN Radio's "Mike & Mike" on Wednesday morning, Nicklaus made it clear that he thinks McIlroy can win many major championships.

"I think Rory is an unbelievable talent," Nicklaus said. "I love his swing, I love his rhythm, I love his moxie. He's got a little swagger there, it's a little bit cocky but not offensive. I like that. I like the self-confidence in a young man. He's got an unbelievable amount of speed in his golf swing, he obviously hits the ball a heck of a long way. And he hits in there consistently and how he controls it.

"It depends on what he feels his priorities are, and that's his call. I think Rory has an opportunity to win 15 or 20 majors or whatever he wants to do if he wants to keep playing. But you just don't know what the guy's priorities are going to be in life 10 years from now."

McIlroy heads into this week's PGA Championship at the Nicklaus-designed Valhalla Golf Club having won his past two events, including the Open Championship, his third major title. He's won three times worldwide in 2014.

Nicklaus, 74, an 18-time major winner, has taken a liking to McIlroy and has counseled him at various times about business and golf. They even talked golf swing recently.

"It's nice he takes an interest in my game," McIlroy said. "It really is cool, and it's nice to be able to talk to him about those sort of things."

Nicklaus also said he hopes that injuries don't keep Tiger Woods from pursuing his record of major championship victories. Woods has won 14 majors but none since the U.S. Open in 2008. Since then, he's missed six majors because of injury, pending his status for this week's PGA.

"He certainly has at least another 10 years of playing major-championships golf," Nicklaus said. "That's 40 -- at least 40 -- majors to win. I believe Tiger will do that if his health remains good. Nobody every wants their records broken, that's obvious. But I don't want him to not break the records because he's not healthy. That's certainly not in the cards of what I would like to see. Or what anybody would like to see."

Nicklaus Dishes On Tiger, Rory
Eighteen-time major champion discusses Tiger Woods' health and the chances he breaks his record for major championship wins and how many majors he thinks Rory McIlroy can win.