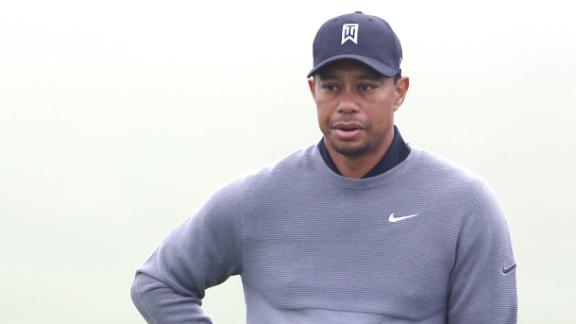 World Golf Hall of Famer and 18-time major champion Jack Nicklaus joined the chorus of people who think the majority of Tiger Woods' issues are of the mental variety.

"Tiger is struggling, I don't think there's any question about that," Nicklaus said Friday on the Golf Channel. "... I think he's struggling more between his ears than he is anyplace else.

"He's struggled with the driver most of his life, really, but he's always been able to find the golf ball and get it somewhere back around the green. ... And now he's having trouble with the short game. That is not a good combination, to drive it poorly and have a bad short game."

Nicklaus believes that Woods will regain his form but that he needs to do it his way.

"I think Tiger will turn it around," Nicklaus said. "He's too dedicated, he works too hard at it, he's got too much talent. He'll figure it out. And personally, I think he needs to figure it out himself. Because a teacher can't teach what's inside your head. You've got to be able to put that positive thought into your head yourself."

And does he think Woods, with 14 majors, will surpass Nicklaus' major championship record?

"I still do," Nicklaus said. "Why would I not think that? ... He's got a lot of golf in front of him. But it's going to be up to him, he's still got to do it. He may; he may not. Obviously chances are harder for him now than five years ago, but I still think he has time on his side."

Woods announced Thursday that he would not play his hometown event, the Honda Classic, next week and is uncertain of his return to the PGA Tour.

He also is not eligible to play in two weeks at the WGC-Cadillac Championship at Doral because he is outside the top 50 in the world rankings. Woods is currently ranked 66th.