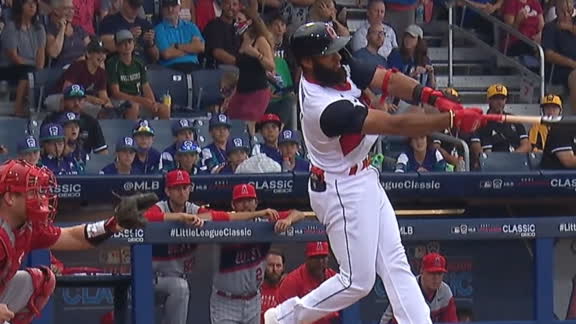 As the rain held off, youngsters in town for the Little League World Series were able to enjoy the festivities. Kids rushed to the stands for ice cream and sweets, popping inflatable thunder sticks in excitement for each big league at-bat.


"It was almost more nerve-wracking throwing for a bunch of pre-teens than it is regularly," Quantrill joked. "But this is a really cool event and getting to play in front of these kids - they took a little time out of their schedule playing games, and coming to watch us play is pretty cool."

Ohtani ripped a single to the delight of the crowd at Historic Bowman Field, which opened in 1926.

Indians pitcher Triston McKenzie tossed baseballs into the stands to Little Leaguers and parents alike throughout the game. Fans often cheered the Cleveland dugout for the generosity.

DJ Yoshi invited young fans into the stands to spin the turntables, with several tunes reverberating through the crowd.

Rosario, who had three hits, belted a two-run homer off starter José Suarez (5-7) in the first inning.

Rosario often got involved in bantering back and forth with the kids in attendance. It was a way for him to stay loose throughout the game.

"Getting to spend time with them is a good memory," Rosario said through a translator. "I've reflected on when I was that age, but among other things, it was when I played lighter."

Austin Hedges doubled in the fourth and scored on an RBI groundout by Myles Straw.

Quantrill (4-2) struck out nine and walked two. Bryan Shaw entered with the bases loaded in the eighth and got David Fletcher to ground into an inning-ending double play.

Emmanuel Clase worked the ninth for his 18th save.

"He just didn't have (one of) his better nights I think," Angels manager Joe Maddon said. "He was getting behind in a lot of counts, his fastball velocity didn't have that consistent life to it. I thought he threw some good changeups before we took him out, good sliders. But overall, he could just never get into a rhythm."

Rosario has 53 hits since the All-Star break, second-most in the American League. The 25-year-old shortstop entered the game batting .341 in the second half after hitting .259 in the first half.

"He's had an interesting year in a sense, but I think once he got comfortable, Tito (manager Terry Francona) put him in that 2-slot and just left him there," Indians interim manager DeMarlo Hale said. "I think he's just gotten comfortable and he's played the game for a number of years at this level. So, it's nothing surprising for me, but I think he's comfortable and he's playing the game at a certain level that we expect. That's what we preach to them as a team."


Angels: RHP José Marté was placed on the injured list for unspecified reasons, and RHP James Hoyt was recalled from Triple-A Salt Lake.

Indians: RHP Aaron Civale pitched two scoreless innings at Double-A Akron as he tries to return from a sprained finger. Civale was leading the AL with 10 wins when he got hurt in June.

Major League Baseball announced that the Boston Red Sox and Baltimore Orioles will play in next year's Little League Classic at Historic Bowman Field on Aug. 21, 2022. The event will serve as a home game for the Orioles.

Those teams were scheduled to play in the 2020 Little League Classic, but it was canceled due to the coronavirus pandemic.

Angels: RHP Dylan Bundy (2-9, 6.04 ERA) faces his former team Tuesday when Los Angeles opens a three-game series at Baltimore. RHP Spenser Watkins (2-5, 5.63) pitches for the Orioles, who have lost 18 straight - the longest skid in the majors since Kansas City dropped 19 in a row in 2005.