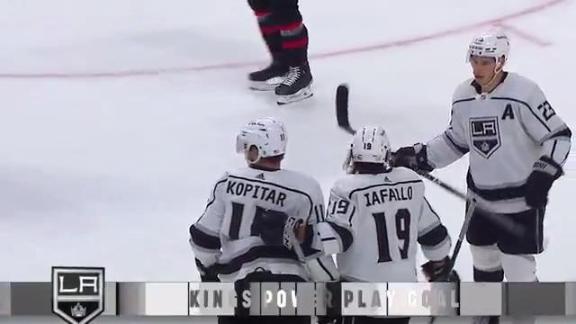 OTTAWA, Ontario -- - Jonathan Quick made 34 saves for his 55th NHL shutout and the Los Angeles Kings beat the short-handed Ottawa Senators 2-0 on Thursday night to extend their winning streak to seven games.

Ottawa has nine players and an assistant coach in the NHL's COVID-19 protocol.


"There's not a guy that I can say didn't give everything he had," Senators coach D.J. Smith said. "Jonathan Quick is the difference ... it's unfortunate when we're this short-handed, but I thought our guys couldn't play much harder."

Anze Kopitar and Andreas Athanasiou scored for the Kings. They improved to 8-5-1.

Filip Gustavsson stopped 32 shots for Ottawa. The Senators have lost six straight games at home and are 0-5-1 overall in their last six.


"It's not a fun situation," said Thomas Chabot, who played almost 32 minutes. "We already knew we were missing a lot of players and then you start the game and you lose another defenseman."

Defenseman Lassi Thompson made his NHL debut for Ottawa and Dilon Heatherington and forward Andrew Agozzino also were recalled from Belleville of the American Hockey League.

Kopitar opened the scoring on a power play with 4:32 left in the second. Athanasiou made it 2-0 with just over three minutes remaining, tipping a point shot.

Kings: At Winnipeg on Saturday night.