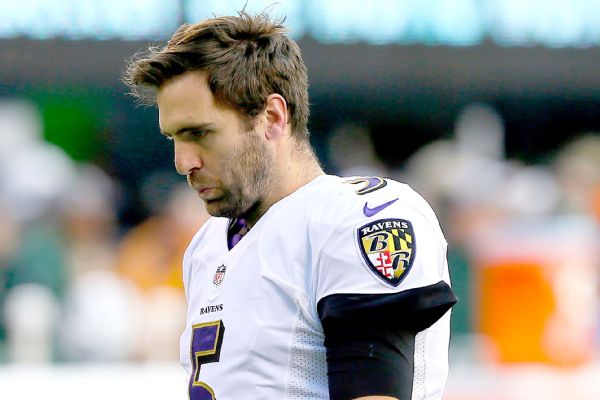 OWINGS MILLS, Md. -- Quarterback Joe Flacco accepted blame for a struggling offense that has held back the Baltimore Ravens for the first half of the season.

"I'm obviously not playing good enough," Flacco said Wednesday after the team's final practice of the bye week. "We're not a good offense, and it starts with the quarterback. I got to be better."

The Ravens (3-4) rank 25th in the NFL in scoring with 19 points per game, and Flacco is the 29th-rated passer in the NFL (75.4). In Baltimore's current four-game losing streak, Flacco has had the ball in his hands in the final two minutes and has failed to deliver the winning drive each time.

"Joe Flacco is the key to our success. So, we need to all do everything in our power that all the things are falling in place for him," Harbaugh said. "He can play. He can throw it. He can make decisions. He can score touchdowns for us. He can do all the things we need to do. We need to make sure that we give him a chance to do that."

The Ravens have scored 10 offensive touchdowns this season. Only the Houston Texans have fewer.

Part of the inconsistencies on offense is due to injuries. Flacco and the Ravens have been without their top receiver in Steve Smith Sr. (ankle) and their best two linemen in guard Marshal Yanda (shoulder) and tackle Ronnie Stanley (foot) for a chunk of the season. The Ravens expect all of them to be ready to play after the bye.

As a result, the Ravens have struggled with poor blocking, penalties, dropped passes and interceptions.

"When you're an offense in this league and things aren't going great, a lot of times you can be so close, and I think we are on that verge of being really close," Flacco said. "But it's a bunch of little things, and it's not just one thing. It's things that add up. That's why this game is an awesome thing: 11 guys have to be fully locked in for 60 minutes in order for it to work. Nobody notices that. We don't even notice it when we're out there playing, but it is the reality of it."

Harbaugh reasserted that he's "a Joe Flacco fan" and believes in him.

"Joe will take care of what he needs to do," Harbaugh said. "I'm not worried about Joe taking care of what he needs to do. Joe works on it harder than anybody. He cares about it more than anybody. We need to protect him. We need to run routes. We need to create confidence in our passing game. We need to run the ball well. We need to do the things we need to do to make the offense work. And Joe will make the offense work."
Related topics:
sportsespnjoe flaccosteve smith srronnie stanleynflbaltimore ravensjohn harbaughmarshal yanda
Copyright © 2021 ESPN Internet Ventures. All rights reserved.
More Videos
From CNN Newsource affiliates
TOP STORIES