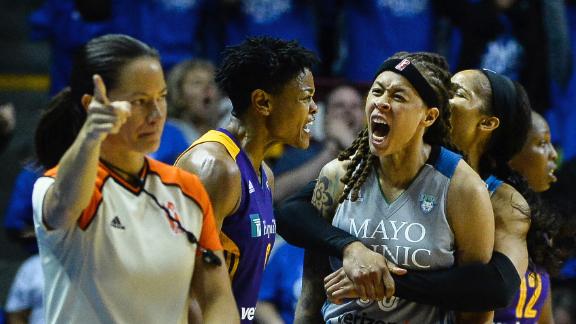 MINNEAPOLIS -- Predicting a strong game in the playoffs from Rebekkah Brunson isn't exactly a reach. She is, after all, a four-time All-Star with four championship rings and more offensive rebounds than any player in WNBA history.

Lynx coach Cheryl Reeve has coached Brunson for eight seasons, through three title runs and two WNBA Finals defeats. She can sense when Brunson is disgusted with her play and knows how she usually responds -- with tenacity.

Brunson managed only two points and three rebounds in Minnesota's Game 1 loss to Los Angeles, with an ugly plus/minus of -22. She spent much of the second half on the bench while the Lynx played three guards trying to scramble back. Several Lynx laughed and joked around Monday before a video session, but Brunson did not join in the merriment.

"Brunson is in the mix for the most competitive people I've ever been around," Reeve said about 90 minutes before Game 2. "Incredibly prideful and works her tail off. Works, works, works. All I know is she said, 'I can't wait for Game 2.'

"I don't know if it's going to be any different. But I know she's a fighter. It's in her DNA. And if we win this game, she's going to be a big reason why."

The Lynx did. And she was.

Twelve points. Three blocks. Three assists. Three rebounds. Brunson held Candace Parker scoreless in the first half and made her work for her 17 points in the second.

"She was so big for us in so many ways," Maya Moore said.

In the end, Brunson saved Minnesota's 70-68 victory with a trademark defensive gem in the final five seconds, deflecting the ball from Game 1 hero Chelsea Gray as the Sparks guard brought it up to shoot. Brunson jumped out to help Seimone Augustus as Gray, who hit Sunday's game winner over Augustus with two seconds to play, came around a Parker pick. Moore grabbed the loose ball and fed Lindsay Whalen, who dribbled out the clock.

"The shot that Gray hit last game was pretty fresh on our minds," Brunson said. "We just wanted to make it crowded for her and make sure she didn't get an easy look. Parker set a screen, so I just felt like I needed to help whoever that was because I know she's clutch in those moments."

The Lynx brought better defense and more fight than the listless first quarter of Game 1, and much of it stemmed from Brunson on both ends of the court. The Lynx need Brunson to shoot to make Parker think twice about doubling center Sylvia Fowles down low. Brunson never left the floor in the first quarter, going 3-for-6 from the field for six points -- a spinning layup, a straightaway jumper and a putback. She added three assists and two blocks as the Lynx jumped to a 28-10 lead.

"Last game we started out pretty flat, and I didn't want that to happen to us again," Brunson said. "So I just tried to come out, bring some energy and be aggressive, and hopefully my teammates would feed off that a little bit. And I think they did."

Augustus told Brunson to play like she did in the regular season. Brunson averaged 10.2 points (her best since 2013), taking and making more 3-pointers than she had her entire career, while defending and rebounding with her usual zest.

"We told her, you've got to make a decision," Augustus said. "You're going to have the ball in your hand the majority of your time in certain situations because of the way they play Syl. Be confident in yourself. Be aggressive. Drive in there. Get some layups. Get some fouls.

Added Moore: "Whatever it takes, whatever the coaches tell her, whatever we as captains and starters come together and agree on, she's going to do it with all her heart. I tell her every day how much I appreciate her because she's such a pro and does all the dirty work for us, without getting the glory she deserves. I'm just grateful that she was able to be so successful in the things that she's great at tonight."

So was Reeve, who saw it coming all along.

"She was aggressive. She was assertive," Reeve said. "That's what we expect from her, to make those kind of plays at the end."