Red Sox starters won the World Series -- from the bullpen 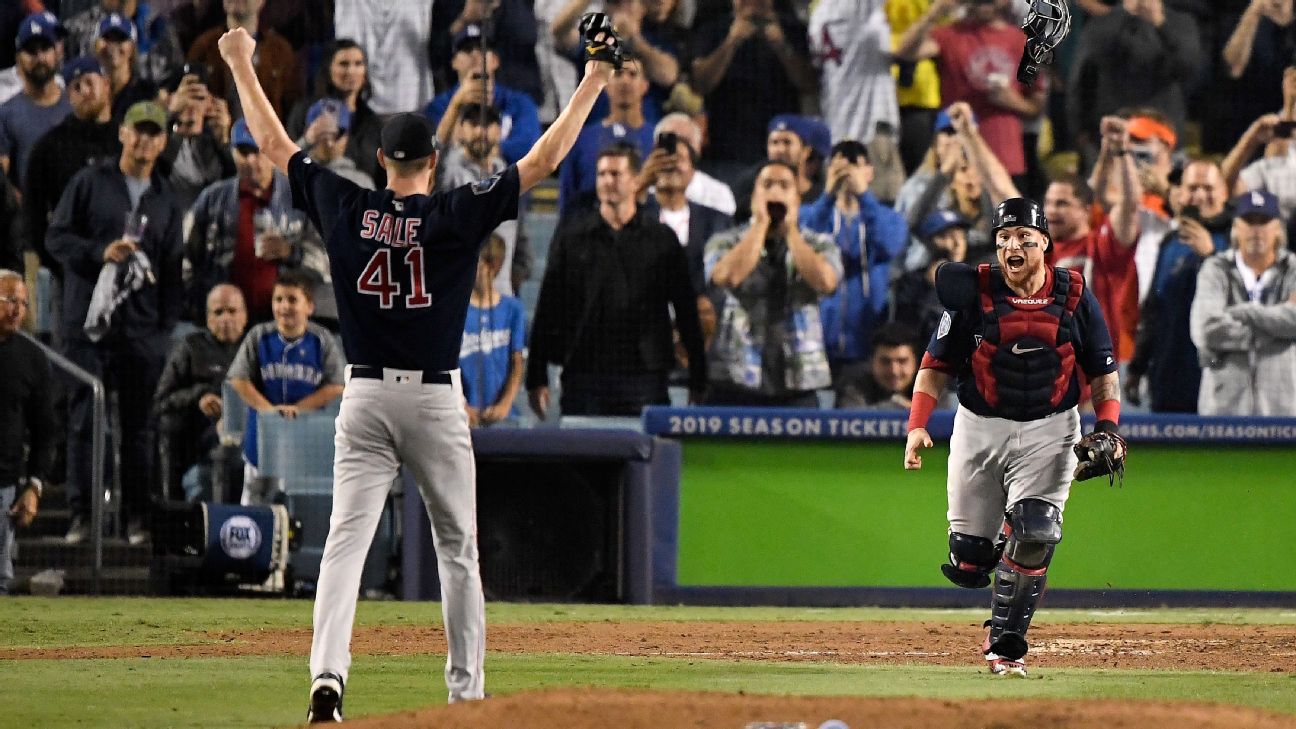 It was fitting that when Fox's cameras scanned the Boston bullpen Sunday to see which relievers were warming up for the ninth inning of Game 5, the two men on the mounds were Nathan Eovaldi and Chris Sale, a pair of starters.

The 2018 baseball season might well go down as the year that relievers became starters and bullpenning took hold, but the 2018 postseason should be remembered as one in which Boston's starting pitchers played a starring role by coming out of the bullpen. Sale's Game 5 World Series appearance is certainly not the first time an ace has trudged in from the outfield: Randy Johnson and Madison Bumgarner were, of course, pretty big deals when they closed out 2001 and 2014 in relief. But the systematic approach Boston took to getting its best pitchers into unfamiliar high-leverage roles was a huge part of how that bullpen -- considered a weakness heading into the postseason -- got through three grueling rounds. Paired with last year's postseason, this approach now appears to be the new normal.

Those six pitchers threw a total of 15 innings of relief. They allowed seven hits and one earned run, that earned run coming at the end of Eovaldi's six-inning relief stint in Game 3. They struck out 16 and walked three. Their combined win probability added (including Eovaldi's loss) was about a half a win, roughly what Milwaukee's ace fireman Josh Hader's was. They were collectively the elite closer every team wants in October, and they were cooked up entirely out of ingredients lying around the pantry.

Again, these sorts of appearances have happened before, throughout postseason history. But rarely this systematically. In the past, starters pitching in relief were often pitching very late in the postseason -- i.e., after they'd made their last scheduled start, or with the ultimatum of a series clincher -- or very early in the postseason, before their first turn had come up in the rotation. Boston, by contrast, had at least one starter between starts who was readily available in the bullpen seemingly every day this October. And rarely have so many different starting pitchers been used in this way in a single postseason.

We looked back since 1969 -- when division play began -- for pitchers who made at least two starts in a postseason (to avoid including pitchers, like Eduardo Rodriguez this year, who were primarily relievers but were pushed into an emergency start) and at least one relief appearance in the same postseason. From 1969 through 2016, there were about two per year on average, with only two postseasons (2003 and 2011) in which there were more than five in a year. But there were seven last year -- those seven allowed just 11 hits and five runs in 23 innings, incidentally -- and six this year, the most there have ever been in consecutive postseasons.

Eovaldi and Porcello might not seem like the sort of show-stopping pitchers you try to force into a game -- each was basically a league-average starter this year -- but an almost universal truth in baseball, right there with "almost every batter hits better against opposite-handed pitchers" and "almost everybody is better at home," is that almost every starting pitcher would be better in relief. Sale's average fastball in his two relief appearances was about 95.5 mph; as a starter in this postseason, he averaged 93.4. Kershaw's fastball jumped from 91 to 92.3, Porcello's from 91.9 to 92.8, Price's from 92.8 to 94.5, and Eovaldi's -- excluding his marathon performance in the 18-inning Game 3 -- from 98.9 to 100.1. Hill's fastball velocity didn't increase, but that's in part because he hardly threw his fastball; rather, pitching in a short burst allowed him to ride his best pitch without having to worry about hitters adjusting. He threw more than 71 percent curveballs in relief, about double his usual rate.

Before the NLCS, we wrote about the Brewers' incredible bullpen, and how unlikely it was -- almost every pitcher in it (besides Hader) had been either very bad or a minor league starter at some point in the previous 12 months. That was a story about how quickly, and unexpectedly, a great core of relievers can come together, and how a team can ride that great core of relievers to postseason success. But embedded in it was the scary alternative: A bunch of great relievers can suddenly be very, very bad. That's what most relievers are: guys with unreliable command, or hard-to-repeat mechanics, or inconsistent stuff, who weren't reliable enough to start. They can ride waves of short-burst brilliance. They can have summers with ERAs in the 1s. They can come out of nowhere and look unhittable for 30, 100 or 300 innings. And then just as suddenly, they can -- and all but a very small handful ultimately do -- go boom. Relievers as a group tend to be pretty good. But it's never entirely easy to trust them as individuals.

But the key thing is that it's not automatic. It takes a manager, a pitching coach, a training staff and a lot of communication. Among Alex Cora's many brilliant moments this postseason were those times he boldly walked to the mound and called in a starting pitcher you hadn't even been thinking was available that day. Also among Cora's many brilliant moments were all the unseen moments beforehand, the ones he spent making sure Porcello, Eovaldi, Price and Sale would be available. Along with a few dozen other Boston successes, that's where this title was won.