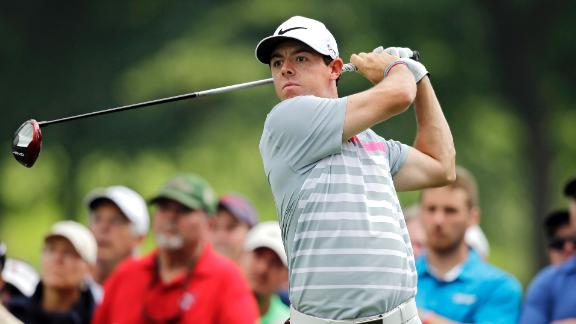 LOUISVILLE, Ky. -- The Rory McIlroy era may be upon us, but the subject of that discussion is not quite buying in.

McIlroy returned to No. 1 in the world on Sunday for the first time in nearly 17 months after rallying to win the WGC-Bridgestone Invitational two weeks after his victory at the Open Championship.

With three worldwide wins this year and two in a row, McIlroy is an obvious pick heading into the PGA Championship at Valhalla Country Club, which he got his first look at Tuesday.

But McIlroy wasn't so sure about any lofty tags being placed beside his name.

"Sometimes I feel that people are too quick to jump to conclusions and jump on the bandwagon and jump on certain things," he said. "I've had a great run of golf, and I've played well over the past few months.

"I said at the start of the year that golf was looking for someone to put their hand up and sort of become one of the dominant players in the game. I felt like I had the ability to do that, and it's just nice to be able to win a few tournaments and get back to where I feel like I should be, which is near the top of the world rankings and competing in majors and winning golf tournaments.

"So I'm not necessarily sure you can call that an era or the start of an era, but I'm just really happy with where my golf game is at the minute, and I just want to try and continue that for as long as possible."

McIlroy has won four times since November, and after a tumultuous 2013 that saw numerous off-the-course distractions and poor play, he has climbed back up the world rankings -- he had fallen to 11th after the Wells Fargo Championship in May.

But that was part of a six-tournament run in which he had five top-10 finishes before winning the BMW PGA Championship, the European Tour's flagship event. He didn't contend at the U.S. Open but felt his game was strong heading into a big stretch of the year that started with the Scottish Open, where he tied for 14th.

He then became the first player since Tiger Woods to follow a major championship win with a victory. A victory here would give him three in a row, a first on the PGA Tour since Woods won five straight over the 2007-08 seasons.

And this latest run has come amid a busy stretch of golf that even had McIlroy realizing he needed a day to exhale.

"I gave myself yesterday off," he said. "I was planning to come and play nine holes. I came up here and just registered and got myself organized, but I didn't go out on the golf course. Gave myself the day off yesterday, which I felt like I needed, just to recharge a little bit.

"I think emotionally and mentally, it's more fatiguing after you win tournaments than it is physically. So just to give your brain and give your head a day just to sort of rest is a good thing."

And he'll have a tough time talking down that "era" discussion if he prevailed again.

"People can say what they want to say, that's fine," McIlroy said. "But I can't read too much into it. I just need to continue to practice hard and play well, and if I do, that's all I can do and try not to read too much of the stuff that's being written, because if you read everything that was being written, I'd turn up at the first tee on Thursday thinking I'd already won the tournament."