Season of change: Lynx and Sparks help open (not close) the WNBA playoffs 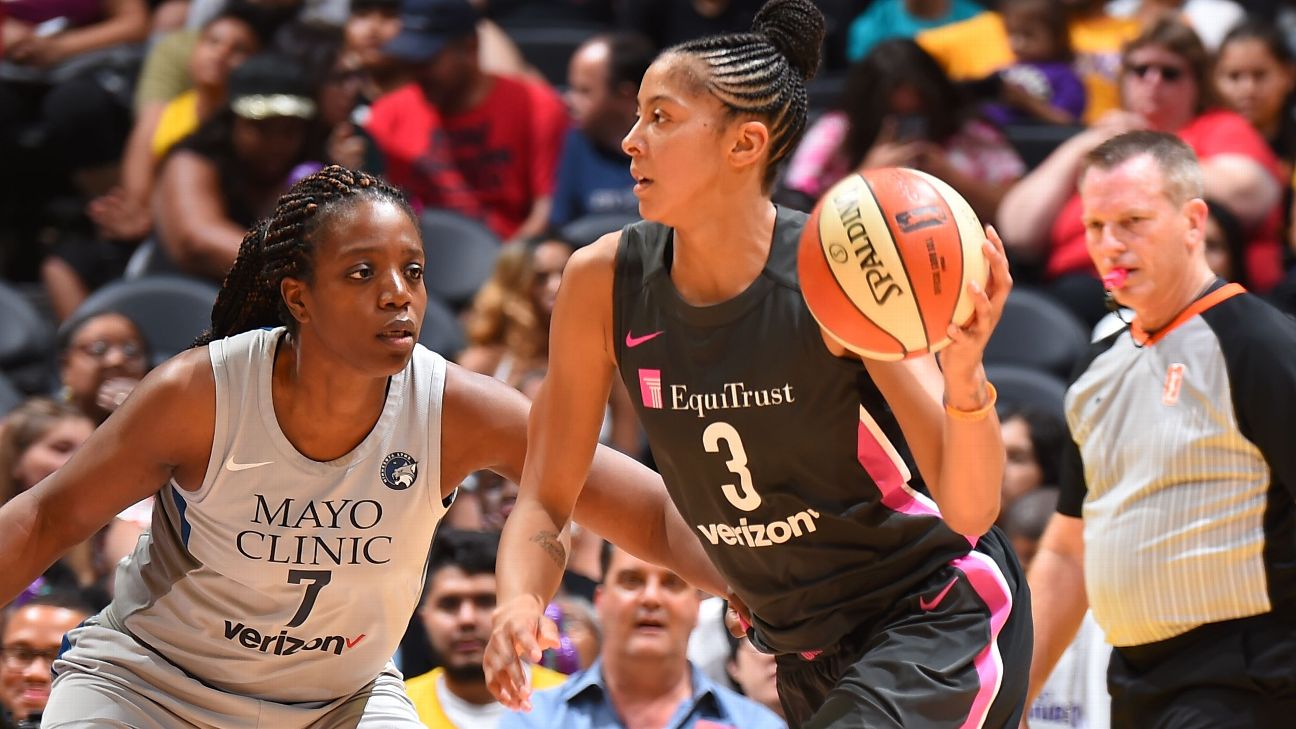 Los Angeles and Minnesota meeting on the first day of the WNBA playoffs, rather than the last day like the past two seasons, is a combination of what went wrong for those teams and what went right for others. And while it feels weird, it's not stunning. We've been watching it happen throughout an exciting WNBA season.

No. 3 seed Washington awaits the lowest surviving seed on Thursday, while No. 4 Connecticut will face the other winner. Waiting and watching all week are No. 1 seed Seattle and No. 2 Atlanta, which have byes into the best-of-five semifinals that start Sunday.

By late Thursday night, only four teams will remain. That quartet might not include the Sparks or Lynx; it definitely can't be both. Neither have been in this position before; the playoff format went to early-round single-elimination games in 2016.

For the Lynx, especially, this season has been a trip back to earth after existing on a different plane than most of the WNBA for the past seven years. During that time, Minnesota reached the WNBA Finals six times and won four titles.

It has been an amazing run, and it will take everything the Lynx have to continue. They want to do it for the retiring Lindsay Whalen. And that's intense emotional fuel. But it might not be enough for a team that finished 18-16 and went 4-6 over its last 10 games.

Over the 2016 and '17 regular seasons and playoffs, the Lynx and Sparks met 16 times, with each winning eight games. The Sparks took the first title, the Lynx the second. But even before this season opened, we offered five reasons Los Angeles and Minnesota wouldn't end up in the WNBA Finals again.

Age and injuries were two of them, and they have affected the Lynx in particular. Whalen, 36, considered retiring before the season, and it's clear that she's ready to transition full time to college coaching when this WNBA season ends. Rebekkah Brunson, 36, and Seimone Augustus, 34, are still starters for the Lynx, although injuries limited Brunson to 25 games this season. She didn't play in the regular-season finale, and neither did guard Danielle Robinson, who had surgery on her ankle last week.

Maya Moore (18.0 PPG) and Sylvia Fowles (17.7 PPG and 11.9 RPG) remain elite players. But Moore has struggled with her shot more this season than anytime in her career. And there have been times when the load on Fowles has been a bit too much.

The Lynx also miss two players who were effective reserves in previous seasons but this year were huge contributors to the two top seeds: Natasha Howard, who was traded to the Storm, and Renee Montgomery, who went as a free agent to the Dream.

The Sparks beat the Lynx 3-1 in their series this season, including 79-57 in their most recent meeting, Aug. 2 in Los Angeles. That and the game being at home should favor the Sparks -- but they haven't been the team they were last year, either.

Injuries affected starters Nneka Ogwumike (who also dealt with illness) and Alana Beard. Los Angeles went 19-15 overall and 11-6 at home, at one point losing five in a row at Staples Center.

The numbers aren't hugely different, but enough to matter a lot in a league where the margin for error is so small -- which brings us to the other first-round game pitting Dallas and Phoenix.

They started the season against each other on May 18. The Mercury won 86-78, but the Wings' Liz Cambage made a statement in her first game back in the WNBA since 2013: 18 points and nine rebounds -- a sign of things to come.

Cambage put on a show this season and is a strong MVP candidate. She broke the WNBA's single-game scoring record with 53 points on July 17. She finished averaging a league-high 23.0 points, plus 9.7 rebounds. She and teammate Skylar Diggins-Smith (17.9 PPG and 6.2 APG) were emotional after the Wings beat Las Vegas 107-102 Friday to secure their playoff spot. Cambage had 43 points and 13 rebounds, while Diggins-Smith had 23 points and eight assists.

The Wings (15-19) were a tough out that night, but that was their only victory in their last 11 games. They finished with an 84-68 loss to Seattle in a game that had no implications for either team as their playoff seeds were already set.

When Dallas is at its best, the Wings can be a scary team to play. But they haven't played at that level much since around mid-July, and it contributed to coach Fred Williams losing his job on Aug. 12 after a loss at Washington.

The season hasn't been all rosy for Phoenix, either. The Mercury (20-14) have to lament a few games that got away, especially at home. At 9-8 Phoenix tied with Minnesota for the worst record at home among playoff teams. The Mercury won't be at their regular home, Talking Stick Resort Arena, on Tuesday; instead they'll be at Arizona State's Wells Fargo Arena in Tempe.

Phoenix's big three -- Diana Taurasi (20.7 PPG), Brittney Griner (20.5) and DeWanna Bonner (17.3) -- were All-Stars. But losing forward Sancho Lyttle for the rest of the season to a knee injury on June 30 hurt the Mercury's defense and rebounding.

However, Phoenix has had experience making runs in this playoff format. In 2016 as the No. 8 seed, the Mercury won games at Indiana and New York to advance to the semifinals. Last year, Phoenix beat visiting Seattle and then won at Connecticut to get back to the semis.

Dallas, by contrast, is looking for the franchise's first playoff victory since 2009, when the Wings were still the Detroit Shock and lost in the Eastern Conference finals to Indiana 2-1. Their only other playoff appearances since were getting swept in two games in the Western Conference semifinals to Phoenix in 2015 as the Tulsa Shock, and then last year's Wings' first-round loss to the Mystics.

Cambage wasn't involved in any of that. Prior to this season, the No. 2 overall draft pick from 2011 played in just that season and 2013 for Tulsa. Now she has the chance to take on fellow center Griner and a Mercury team that won the teams' season series 2-1. The last time they met was July 10, a 101-72 Wings victory.

Cambage has said she is not sure she will return to the WNBA next season, which adds even a little more drama to the matchup with Phoenix.