Sources: LeBron frustrated by how he has been officiated this season 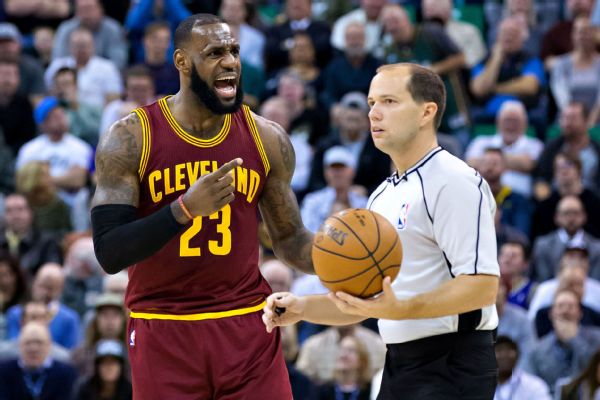 James' frustration boiled over with 2:09 remaining in the first quarter, when he shouted at referee Tyler Ford and was assessed a rare technical foul -- just his second of the season -- after Utah's Shelvin Mack fouled James and put him on the foul line after an and-1 layup. While James got that call from Ford, he was upset from his previous trip down the court, when he felt like Mack fouled him on another layup attempt and there was no whistle.

James was irate, in part, because, sources told ESPN, he could hear Utah coach Quin Snyder instruct Mack to foul him to prevent the transition bucket, and even with that instruction being given and James absorbing what he thought to be obvious contact from Mack, no call was made.

"Yeah, I got fouled," James said after the game, when asked about his outburst.

James finished the game with seven free throw attempts -- right on his average of 7.1 attempts per game this season.

On Sunday, during a 120-116 win in Phoenix, he attempted just six. In the second half of the victory over the Suns, James was brought to the floor by contact as he missed a 9-foot shot in the paint and no foul was called. James lobbied all three referees for an explanation for the non-call, and all three told James they did not see the play, multiple sources told ESPN.

James' teammate, Richard Jefferson, spoke up after the Phoenix game on James' behalf.

"This is another night where he's going to the basket and he's only getting six three throws, eight free throws," Jefferson told Fox Sports Ohio. "For a guy that spends as much time in the paint and drives and is aggressive as he is, for him to be bottom 15 in the league in free throw attempts given that he's the best player on the planet, four-time MVP, it's [disappointing].

Much of James' detest comes from the fact that the vast majority of his shots come from within the paint -- as 12 of his 20 did on Tuesday -- yet, according to multiple sources, he feels contact is ignored, whereas players who thrive more on jump shots than drives have been rewarded with big nights at the line. For instance, Butler has had two games with 20 free throw attempts or more already in the new year, and Harden has had double-digit free throw attempts in seven of his past nine games.

James also averages more minutes than everyone above him in the top 10, save for Davis, who is tied at 37.1 minutes per game, and more field goal attempts per game than Antetokounmpo, Butler and Harden. Add it up and there is a perception by James, according to multiple sources, that he doesn't get officiated the same way as many of his All-NBA-level peers.

This is not the first time this issue has come up with James. During Cleveland's first-round series sweep of the Detroit Pistons in April, Cavs coach Tyronn Lue compared James to Shaquille O'Neal for the way contact went unnoticed because of his size.

"We used to tease Shaq all the time about soft fouls. He said: 'Listen, if I pinch you, it feels the same way when you pinch me. No matter how big I am, it feels the same.' I never thought about it like that. That's kind of how LeBron feels."

James has felt like a target in the past, multiple sources told ESPN, even believing that in previous playoff series against the Washington Wizards early in his career, the Wizards' intent was not only to foul James but physically harm him. James was taken out of the air by Brendan Haywood during the 2008 playoffs, when Haywood played for Washington. The Haywood play caused James' elbow to bleed after he fell to the floor.

On Tuesday night, James once again had several cuts on his hands and arms, which were treated by Cavs trainer Mike Mancias after the game.

Roundup: Terry a Cherry?
ESPN UK round up the main stories from the day's sport news.