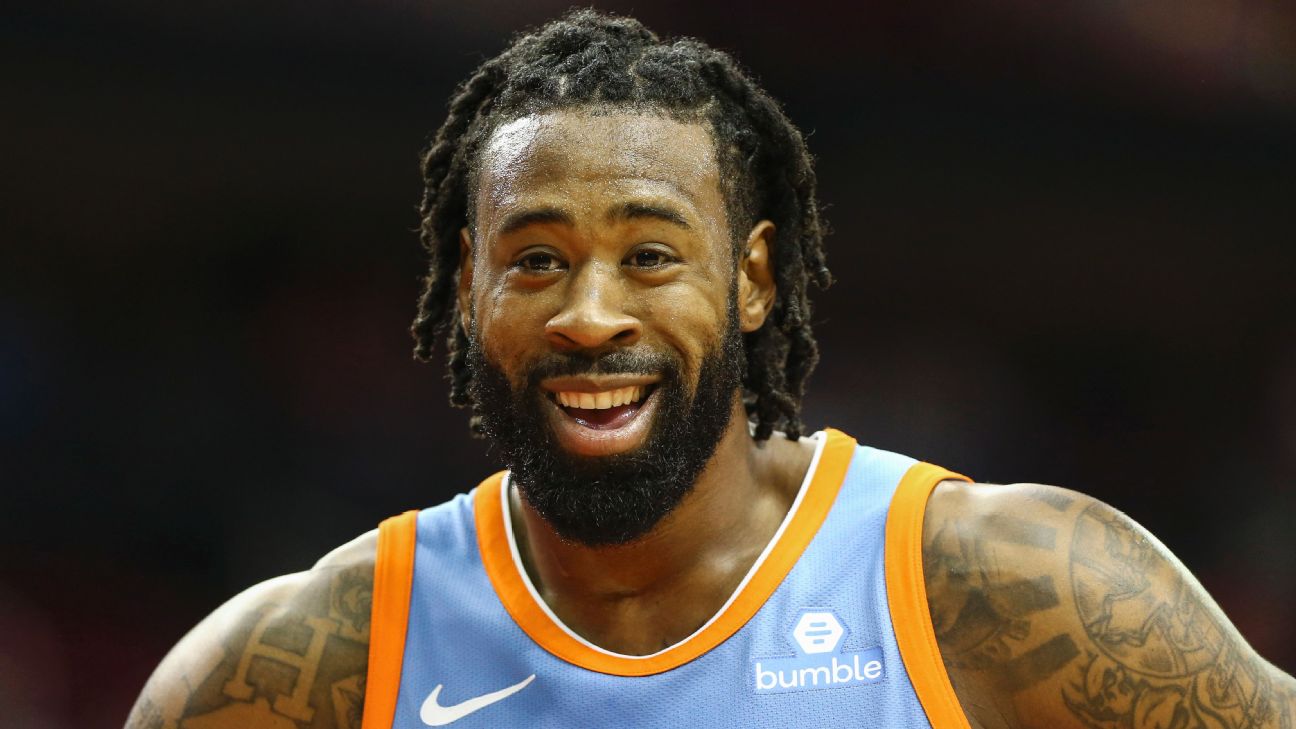 Jordan, who infamously spurned the Mavs in 2015 free agency after making an oral commitment to come to Dallas, has a deadline of 11:59 p.m. ET Friday to make a decision about the player option that would pay him $24.1 million next season.

If Jordan declines the option with the Los Angeles Clippers, league sources say the Mavs plan to aggressively pursue him in free agency, which begins Sunday. The interest is mutual, according to league sources, as hard feelings from three years ago have been forgiven.

The Mavs made adding an established center their clear priority after trading for European swingman Luka Doncic, the No. 3 pick in the draft. The Mavs, who could have more than $25 million in cap space if they decline the $5 million team option on Dirk Nowitzki (who would be re-signed at a reduced salary), are one of few teams with significant salary-cap space this summer.

"July 1 is right around the corner, bro," coach Rick Carlisle said on draft night when asked about the Mavs' need for a big man. "We will address it. There will be options."

The Mavs have been in communication with Jordan's agent, Jeff Schwartz, but a trade fit with the Clippers is problematic, according to league sources.

A deal with Dallas would almost certainly send shooting guard Wesley Matthewsto the Clippers. Matthews is due $18.6 million in the final season of his contract.

The Clippers have a deep backcourt after selecting guards Shai Gilgeous-Alexander and Jerome Robinson in the draft lottery. Sixth Man Award winner Lou Williams, Patrick Beverley and Milos Teodosic give the Clippers three proven guards on the roster.

Dallas does not have the ability to include a first-round pick in the trade due to giving up a protected first-rounder to the Atlanta Hawks in the deal for Doncic.

Matthews' salary is significantly larger due to a promise the Mavs kept after Jordan decided to renege on his commitment and return to the Clippers in 2015.

Mavs owner Mark Cuban offered Matthews as much money as Dallas could pay him, pending Jordan's decision, believing that getting Matthews on board was key to wooing Jordan. The Mavs got a commitment from Jordan the next morning when Cuban and Chandler Parsons, the then-Dallas forward who was acting as the franchise's recruiting chairman, surprised the center with a visit to his Los Angeles home.

Matthews' contract would have been four years, $57 million if Jordan joined the Mavs. Matthews got a maximum deal -- four years, $70 million -- after Jordan backed out and returned to the Clippers following a wild, controversial day.

The Clippers, who learned that Jordan was having second thoughts about his decision to go to Dallas, sent a contingent to his Houston home on the final day of the moratorium to persuade him to come back to Los Angeles. The group, which included owner Steve Ballmer, coach Doc Rivers and players Chris Paul, Blake Griffin, J.J. Redick and Paul Pierce, hung out with Jordan until he could officially sign his contract. Meanwhile, Jordan ignored calls and texts from Parsons and Cuban.

The Mavs were enraged by how Jordan handled the situation but are willing to forgive and move on three years later. They believe Jordan, a dominant athletic and physical presence who turns 30 next month, would help a young core that includes Doncic, point guard Dennis Smith Jr. and forward Harrison Barnes as Dallas hopes to fast-forward its rebuilding process and contend for a playoff spot this season.

Jordan, who averaged 12.0 points and 15.2 rebounds for the Clippers last season, is well suited to play in Carlisle's offensive system, which relies heavily on the pick-and-roll.

Jordan is the last of the "Lob City" cornerstones left with the Clippers after the departures of Paul and Griffin in trades over the past year. The Clippers are poised to move on from Jordan after acquiring center Marcin Gortat in a trade that sent guard Austin Rivers to the Washington Wizards.