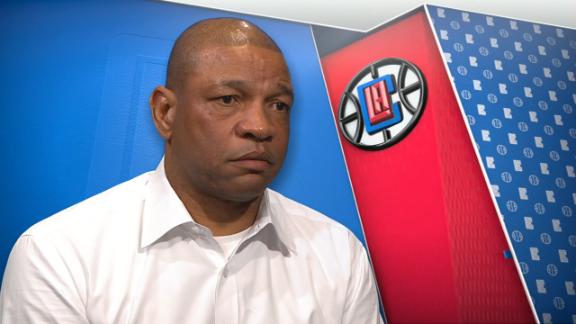 The Houston Rockets are shocked and disappointed that Blake Griffin and Austin Rivers avoided any disciplinary action as a result of the events during and after theClippers' contentious win Monday night in Los Angeles, team sources told ESPN.

Rockets forwards Trevor Ariza and Gerald Green were both suspended two games for entering the Clippers' locker room and engaging "in a hostile, verbal altercation with several Clippers players," according to an NBA news release.

The Rockets are upset that Griffin and Rivers weren't disciplined for their roles in the events that led to Ariza's anger escalating to the point that he stormed into the Clippers' locker room to confront them.

The Rockets are adamant that Griffin intentionally made contact with Mike D'Antoni late in the fourth quarter, moments before a heated confrontation between the Houston coach and the Clippers star forward. D'Antoni was arguing a goaltending non-call on the previous possession when Griffin cussed at him, according to a source, and veered toward him, making contact while D'Antoni stood on the sideline. After being fouled moments later, Griffin made a beeline toward D'Antoni, with double technical fouls being called after they exchanged expletives.

Rivers, wearing a protective boot and a suit while sitting out due to an ankle injury, stood on the court in front of the Clippers' bench and talked trash to Ariza with 1:03 remaining in the game. That prompted a confrontation between Ariza and Griffin that resulted in double technical fouls and their ejections.

According to Rockets sources, Rivers continued the profane trash talk after the game, yelling loudly enough in the Clippers' locker room for Ariza to hear him from the hallway, where players commonly congregate and visiting teams frequently put food and equipment. Sources said those insults, including calling Ariza out by name, caused Ariza's anger to mount.

Clippers coach Doc Rivers was asked if other teams seem to continually test their players.

"They're not testing me, I'm not playing. Unless D'Antoni tries to test me, you know, and that'd be something different. But no, I mean, they test everybody. It's not just Blake and Austin. It's everybody," Rivers said after the Clippers' 109-104 win Wednesday over the Nuggets. "Just go through the league, you see it every night. You know, Blake and Austin's names are more nuclear, if you print their names and it comes out. But, it's our league, you know? It's much ado about nothing, if you want me to be honest. A lot of talk, you know, and then you go find someone to say something. And then if you write Austin's name or Blake's name, you get a big article, everybody reads it, and that creates more news. And to me, it's just white noise. I think it is for our team as well."

One source said the Rockets anticipated a one-game suspension for Ariza, based on league precedent, but were surprised that Green's punishment exceeded a fine.

No other players were fined or suspended, including Rockets stars Chris Paul and James Harden, who followed Ariza and Green into the hallway between the locker rooms in an attempt to defuse the situation, the league's investigation determined. Some in the Houston organization are annoyed by the perception that Paul's role as National Basketball Players Association president helped him avoid discipline, agreeing with the league's conclusion that he served as a peacemaker.

Doc wasn't concerned about his players being disciplined
Doc Rivers reacts to the league's ruling that none of his Clippers players will be punished for their roles in the incidents with the Rockets.