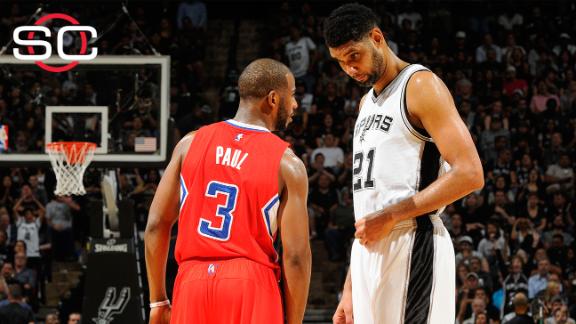 Don't confuse the lack of resolution in the Clippers-Spurs series with a lack of progress. They're back where they started -- even on the ledger, with the Clippers holding home-court advantage -- but we've learned so much during this circuitous four-game route.

We've learned that the Kawhi Leonard Revolution is upon us. The Spurs have said all season that they are transitioning toward making this Leonard's team, that Leonard would be there long after Gregg Popovich, Tim Duncan and crew were gone, so they were making preparations. The moment is here. Skynet has become self-aware. Leonard looks unstoppable in this series.

Leonard is averaging 25 points and shooting 60 percent in the series, posing a threat in a variety of ways on offense: 3-pointers, post-ups, midrange jumpers.

The Spurs need to double down and look for even more shots for Leonard. The Spurs had the fewest 20-field-goal-attempt games by a player this season, with eight. (The only other team in single digits was, as you might imagine, the Atlanta Hawks.) The Spurs can't be deterred by their 2-6 record in those 20-attempt games in the regular season. The playoffs are all about focusing on the matchup, and the Clippers don't match up well against Leonard.

We've learned that Blake Griffin had one more upshift in him this season. In Game 1, he returned to attacking the basket as he had in years past. In Game 2, he grabbed a season-high 19 rebounds. The regular season seemed to be a step back for Griffin in many ways. He missed more games because of injury than he had in any of the five seasons since he sat out his rookie season with a knee injury.

We've learned that Tony Parker can still turn the corner and get into the lane, even after 14 years in the league, even after a variety of injuries hobbled him in Game 1. His seven field goals in Game 4 matched his total from the first three games. It was the most encouraging development for the Spurs, even as they lost on their home court.

We've learned that Austin Rivers can contribute to a playoff victory. The Clippers turned a two-point lead into a six-point lead when Rivers relieved Chris Paul in the final four minutes of the first half of Game 1.

And when Rivers scored 16 points in Game 4, it stood out even more than Paul's 34 points that afternoon. Every minute that Paul can rest without it costing the Clippers is a small victory for them.

Of course, the appeal of this series lies in the unknown, questions of whether the Clippers have truly progressed or the Spurs have finally -- perhaps permanently -- regressed. As much as we've learned so far, we still don't have the ultimate answers.