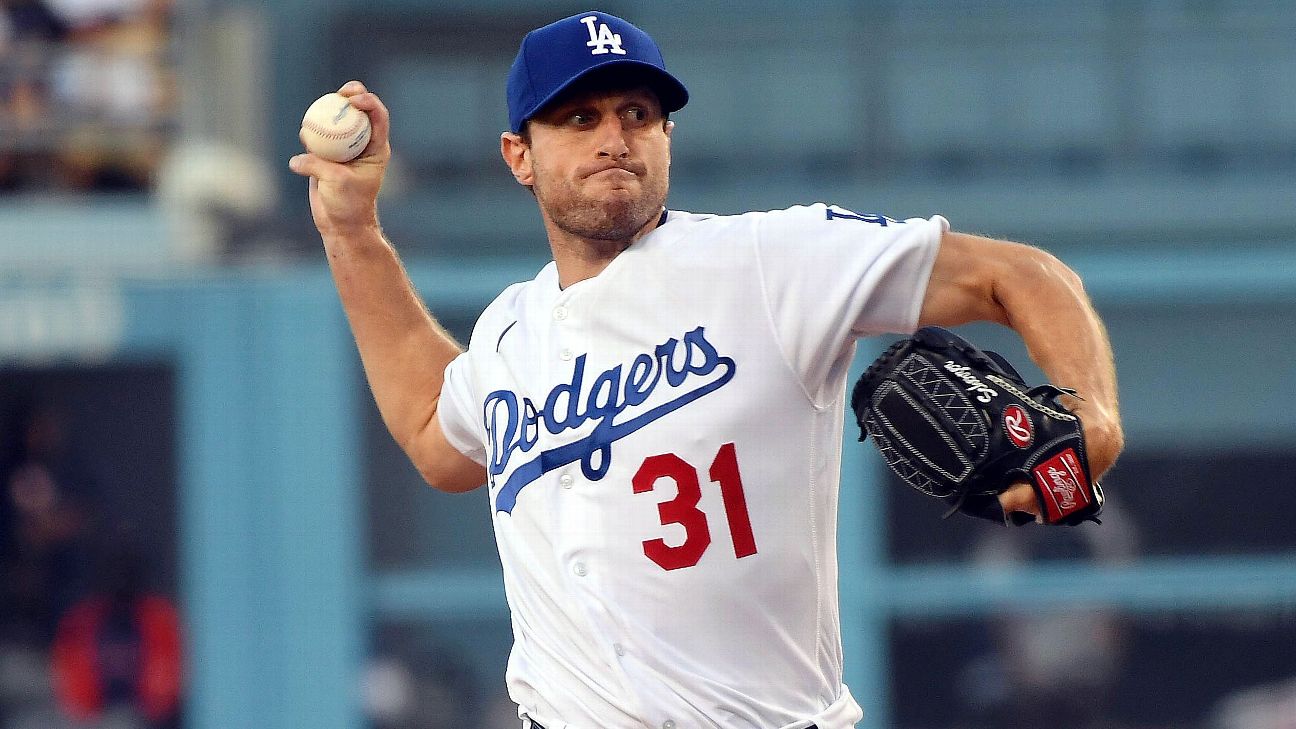 LOS ANGELES -- The cheers kept getting louder, more exuberant, more prolonged. And so Clayton Kershaw turned to Max Scherzer and told him what had quickly become obvious.


Throughout his 14-year major league career -- a career that includes three Cy Young Awards, two no-hitters and one World Series championship -- Scherzer had never received a curtain call. Not one he could remember, at least. But he got one on Wednesday night, in his Los Angeles Dodgers debut, after limiting the formidable and abhorred Houston Astros to two runs over seven sterling innings in a 7-5 victory.

At the behest of Kershaw, another three-time Cy Young Award winner, Scherzer spilled out of the third-base dugout, tapped the front of his new cap and saluted a sellout crowd of 52,274 with an extended right arm, a fitting apex to a superlative first impression.

Scherzer scattered five hits, walked one batter and accumulated 10 strikeouts -- three of which came against Jose Altuve, delighting what registered as the largest crowd to watch a 2021 baseball game for the second straight night.

The 37-year-old right-hander threw his fastball an average of 95.2 mph, a full tick faster than his previous high this season. The adrenaline coaxed from a raucous atmosphere certainly helped spark that, but Scherzer also attributed the increase to fully recovering from the triceps injury that prompted him to skip a start leading up to the trade deadline.


Scherzer generated 10 swings and misses with that fastball, but it was an effective curveball, he said, that opened everything up.

"From the moment I got to the ballpark, we got to the ballpark, you could just see that elevation, anticipation from our guys," Dodgers manager Dave Roberts said. "The buzz in the crowd from the first pitch, him taking the mound, donning the Dodger [home uniform] for the first time -- he delivered. He delivered. Just the intensity. It was so much fun. And it was just really cool to see the crowd smell it and want him to finish that seventh inning."

Scherzer returned to the dugout in the middle of the sixth inning after having thrown 89 pitches, but Roberts offered up only encouragement at that point. Scherzer had retired 17 of 20 batters since giving up a first-inning home run to Michael Brantley, and Roberts didn't necessarily think twice about letting Scherzer come back out for the seventh, even though the Dodgers will heavily rely on him over these next couple of months.

Scherzer began the seventh with a leadoff walk to Kyle Tucker, who later cut the Astros' deficit in half with a ninth-inning two-run homer off Kenley Jansen. But Scherzer made quick work of Robel Garcia and Jason Castro. On his 109th pitch, which matched his season high, Scherzer got pinch hitter Chas McCormick, his last batter, to swing through a 96 mph fastball, completing seven innings for the seventh time this season and dropping his ERA to 2.75.

"With everything on the line, the way the crowd was -- that was a high-adrenaline start, coming here," Scherzer said. "Try not to do too much. Just pitch my game, go out there and do what I can do, and just try to navigate the lineup. The offense tonight went off."


Scherzer benefited from two home runs by Mookie Betts and another from AJ Pollock, but it was his outing that spoke volumes about what he can contribute moving forward.

The Dodgers -- 65-44 but still 3 games behind the first-place San Francisco Giants in the National League West -- are suddenly in a bind with their starting pitching. Trevor Bauer is on administrative leave and under separate investigations by MLB and the City of Pasadena Police Department after sexual assault allegations. Kershaw is nursing forearm inflammation that has kept him out since early July and is not currently throwing. Neither is Tony Gonsolin, who is on the injured list with shoulder inflammation. And Danny Duffy, acquired from the Kansas City Royals last week, might not be available until September.

Those concerns were at the crux of the motivation behind sending an impressive package of prospects to the Washington Nationals in exchange for Scherzer and All-Star shortstop Trea Turner last week. The Dodgers' desperate need for starting-pitching depth was illustrated earlier Wednesday with the signing of four-time All-Star Cole Hamels, who has made only one start since the beginning of the 2020 season and is still in the process of building arm strength.

But Scherzer is the one the Dodgers will rely on in October.