Steelers' Marcus Gilbert: All I want for Christmas is the Bengals 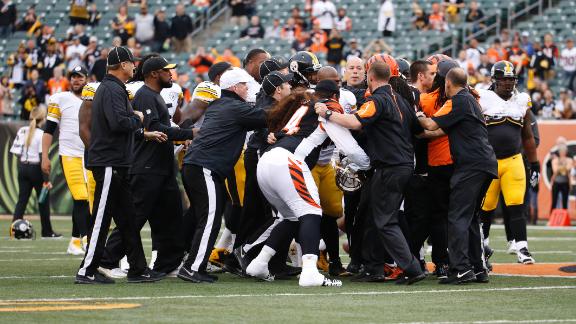 The game didn't end Sunday for these two, who took to social media to blast each other after the Steelers' 33-20 win. Responding to a not-safe-for-work Instagram post from Bengals cornerAdam Jones, Steelersright tackle Marcus Gilbert made clear on Twitter what he wants this holiday season: a rematch with the Bengals in the playoffs.

The tension hit a boiling point with Sunday's pregame scuffle that involved several Bengals and Steelers. The principals were Bengals linebacker Vontaze Burfict, who had angered the Steelers by appearing to celebrate a tackle that injured running back Le'Veon Bell on Nov. 1, and Steelers linebacker Vince Williams, who threatened Burfict on social media after that game, a Bengals win. Bell was lost for the season with a torn MCL.

"I'm sitting here looking at the thing on ESPN. I guess Pittsburgh got all gangsters," Jones said. "Mike Tomlin [should] tell his team to shut the f--- up and play football, because ain't nothing gonna happen to [Burfict], on the field or off the field. Dig that. Y'all want to go report something, report that. Bitches."

"No we are not thugs. We are professionals that seems to own the bengals," Gilbert said. "Don't get mad bro."

The antics have gotten so wild that Bengals tackle Andrew Whitworth blames the NFL and commissioner Roger Goodell for not curbing the heightened intensity. The Bengals should be a playoff lock at 10-3, while the Steelers are battling the Jets and Chiefs for an AFC wild-card spot. All three teams are 8-5.